The jewel piercing the otherwise linty outie bellybutton of Mayor Enrique Alfaro’s recently-christened “gastronomic corridor” (a collection of restaurants dotting Avenida Mexico between the perpetually congested Lopez Mateo and Golfo de Cortes glorietas) is Restaurante Alcalde, if its placement at number 36 on San Pellegrino’s list of Latin America’s 50 best restaurants is any indication.

Alcalde opened five years ago, the brainchild of chef/owner Francisco Ruano, who prior to his current venture worked at several temples of haute cuisine, including Noma in Copenhagen, El Celler de Can Roca in Catalonian Spain, and Mugaritz in Basque Spain.  Ruano, who comes complete with semi-requisite beard and tattoos, puts out a seven-course tasting menu every day of the week, lunch and dinner (except the lunch-only menu offered on Sundays). 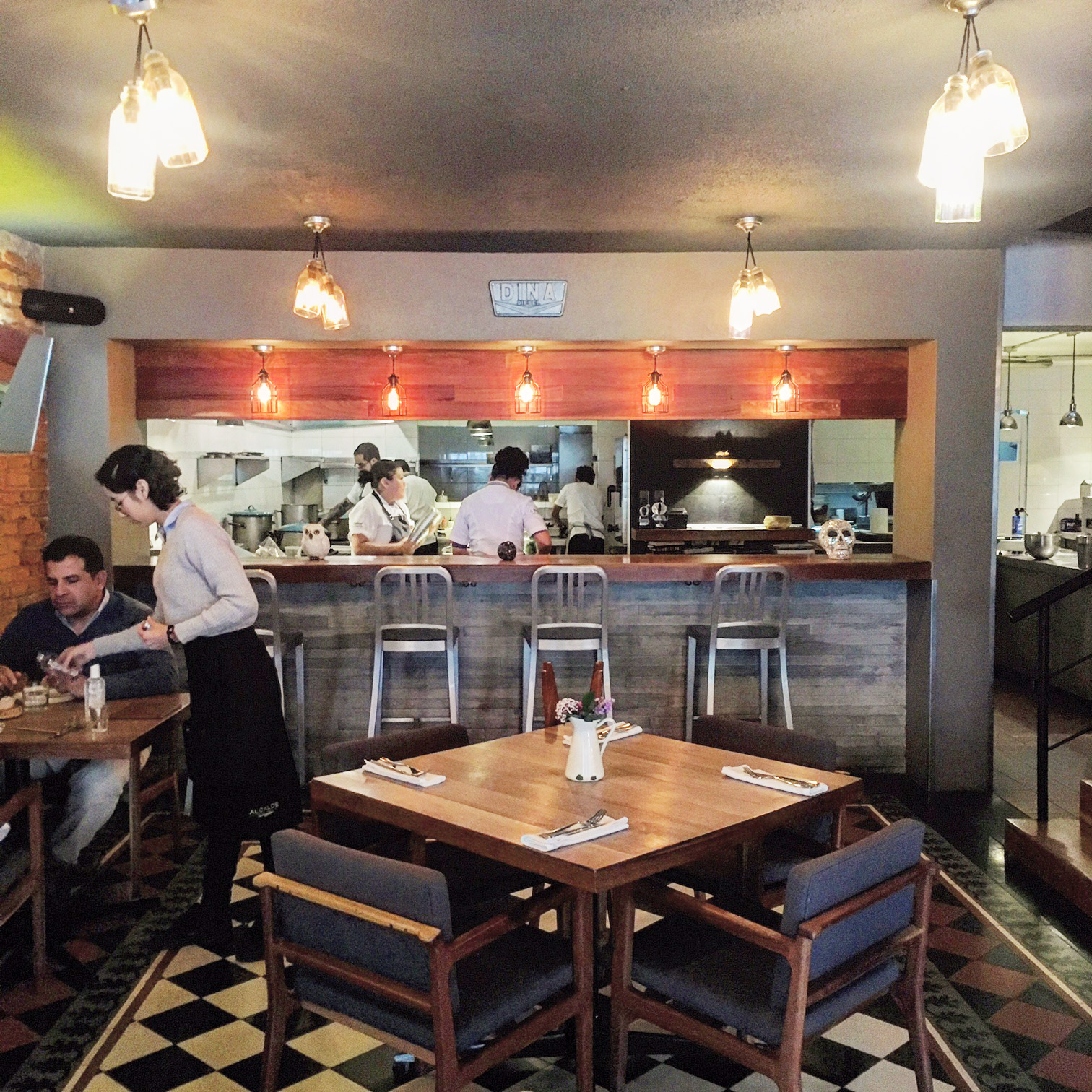 Ruano’s bill of fare changes roughly every three months, almost de rigueur for restaurants of all levels operating in our current moment’s hyper local, season-appropriate-obsessed culinary culture. But little tweaks are made often, mandated by availability of ingredients, or a lack thereof.The advice, then, is to not expect the kitchen to follow to the letter the menu printed on the restaurant’s website.

The tasting menu is, broadly speaking, a transition from zinging acidity to luxuriant umami, from straightening to attention in delighted surprise to sinking lower in your chair heavy-lidded and blissful.  There were only two moments that broke the kitchen’s spell, and they were brief and forgivable.

The menu de degustacion opened with a large clam shell in whose nacreous confines was arranged a mixture of chopped clam, avocado, slivers of serrano pepper and ikura (large ruby red salmon roe), all marinating in a biting lime vinaigrette.  It was a play, essentially, on a tradition aguachile, but featuring ingredients unlikely to make an appearance at a cevicheria in the San Juan de Dios Market across town.  The dish’s acidity seemed to be designed to give the diner’s palate a light smack across the nose and wake it up.  One of two moments of imbalance, it erred a little salty, although the flavors themselves were otherwise in admirable harmony.

Alcalde’s seven-course tasting menu, at 850 pesos, isn’t a bargain, but neither is it exorbitant considering the generous portions and high quality of ingredients. 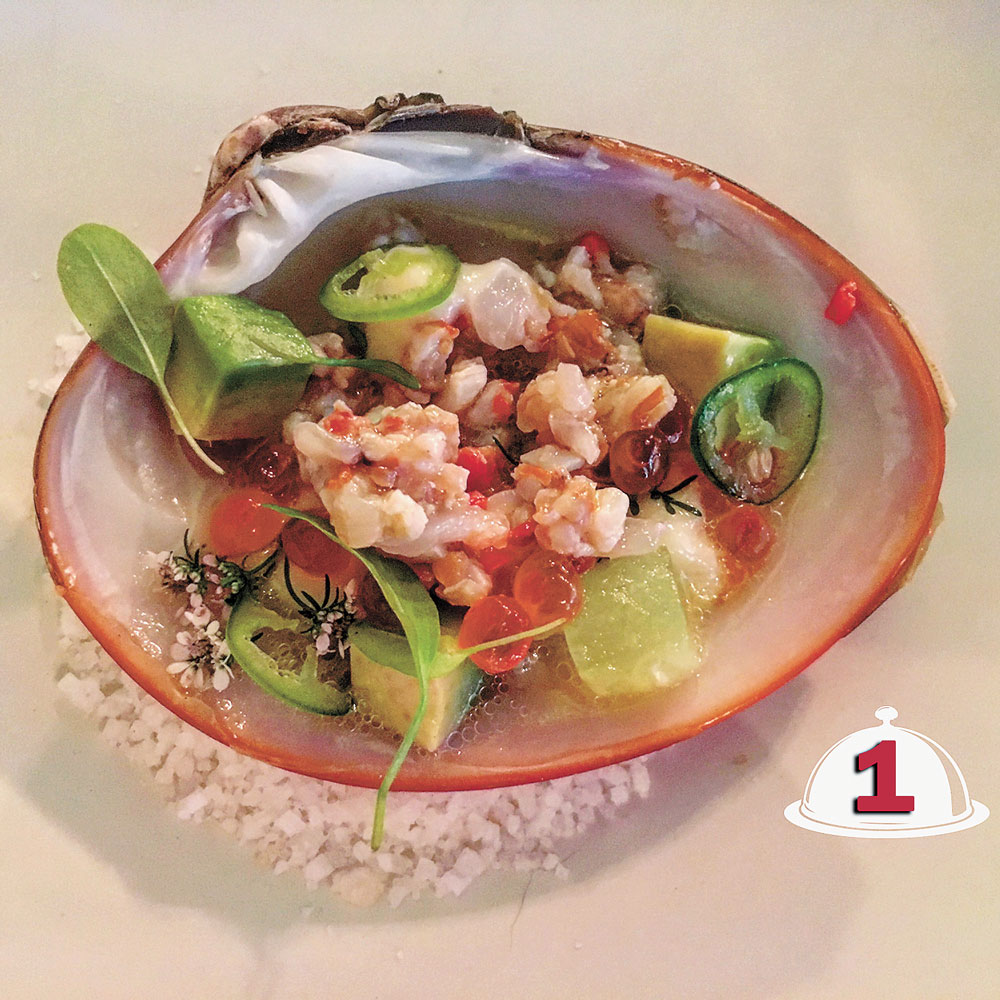 The second course, following swiftly upon the first, featured an impeccable quenelle (a fancy term for a small oval scoop of most anything) of pleasingly firm burrata cheese nestled in a bramble of fennel, purslane (a highly saline, thin-leaved succulent), nopal cactus and various edible flowers.  Coating everything was a vinaigrette of broccoli jus, egg yolk and lime.   It seemed to deliver on the premise of its predecessor by challenging the guest with both saltiness and acidity, but without overwhelming with either (thanks in part to the smooth, unctuous cheese). 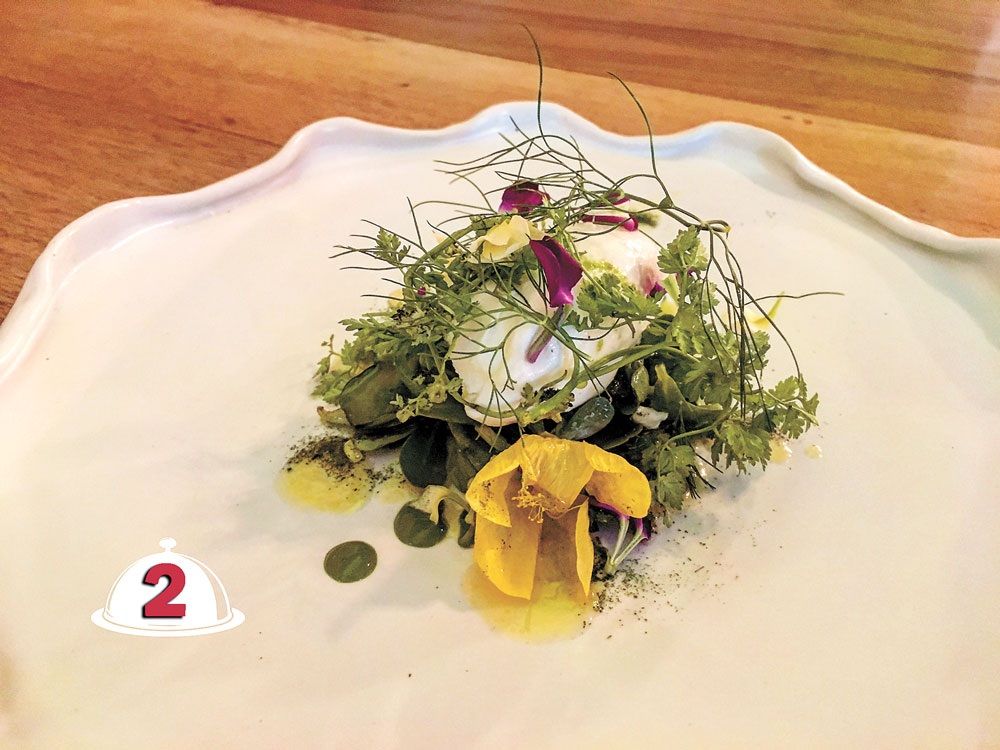 Baqueta, a species of Mexican grouper fish often used in the cuisine of the state of Veracruz, featured in course three. It was presented alongside the kitchen’s take on a traditional sauce from the aforementioned region made from a puree of tomato, bell pepper, olive oil and onion.  Served with pickled yellow peppers, tomatoes and carrots to maintain a slowly declining level of acidity among a rising tide of richness that would begin to characterize the remaining savory courses, the dish also featured a scoop of fish bone collagen whipped with extra virgin olive oil, a shockingly silky hit of pure decadence to make the Marquis de Sade murmur disapprovingly behind a bone white, satin-clad hand. 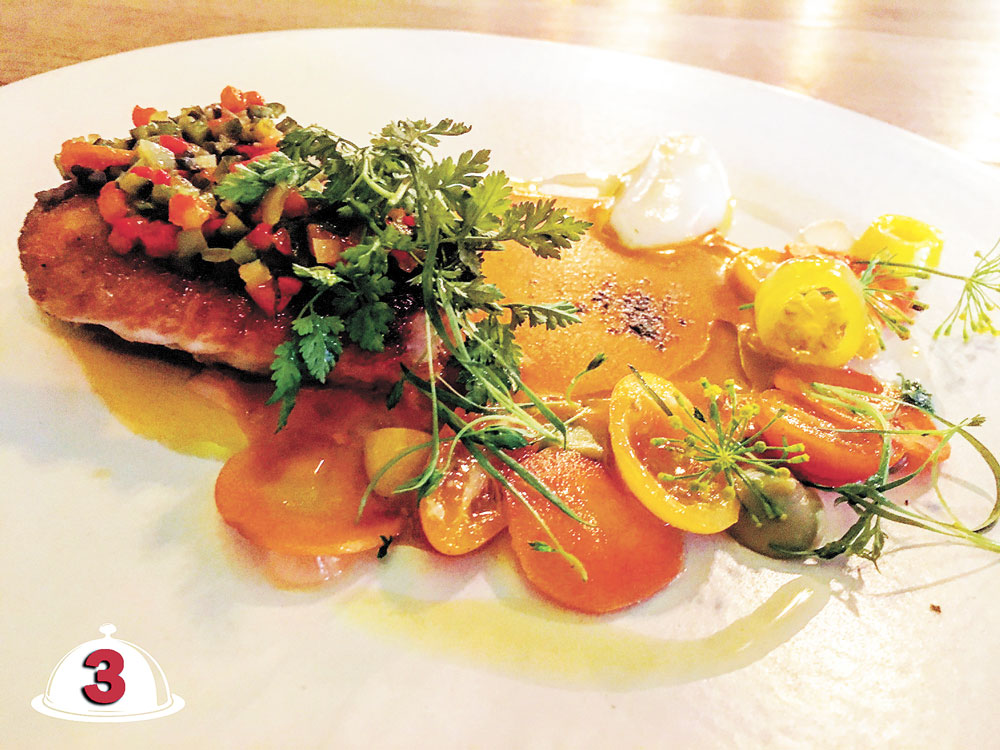 A quick aside for the wine enthusiast: holding me through these and two more courses was a  generously poured glass of Honoro Vera verdejo (an Iberian white wine grape) from the Rueda wine region of Spain.  It proved suited to all the courses aside from the final savory one – no fault of the staff as it was sipped slowly and gingerly, a la a frail Pacific Heights socialite.  And while an official wine pairing isn’t technically offered, the patient, amiable young waitress, who proved along with the rest of the waitstaff a fountain of knowledge, made it known that something of the sort can be readily assembled should the guest be interested.

Every food culture has what they term their version of caviar, and in Mexico it’s ant eggs, or escamoles.  A generous pile of them were mixed with diced rutabaga and set upon a cushion of pureed cauliflower and parsnip for course four.  While interesting and flavorful, it was the second and last time balance was compromised, again in the area of salt content, the source of which is not the “caviar of Mexico” itself; that moniker refers mainly to its texture. 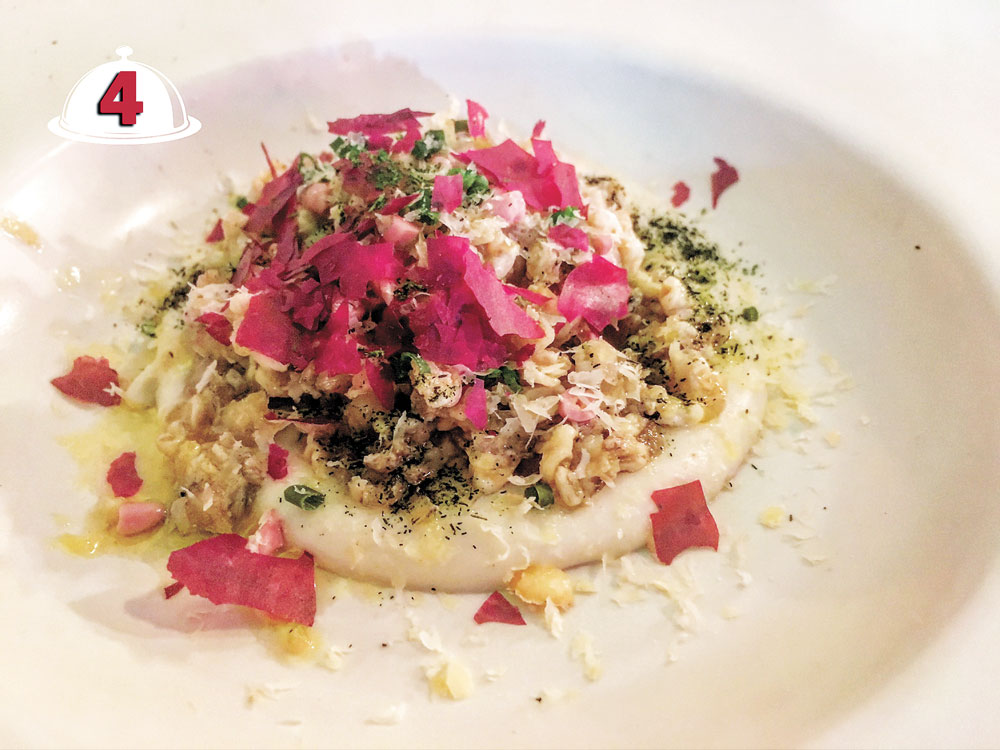 The crackle and snap of pork skin, porcine music of the non-semitic gods, accompanied the final savory course.  It was a toe-curler, consisting of several bites of succulent chicharron plopped on a bed of amaranth (a gluten-free grain) mixed with bits of lobster. The beanpole of a runner who brought the dish out finished it off by pouring into the bowl a gravy boat of warm pork broth, forming a moat of steaming liquid around a crunchy pork castle whose siege would be mercifully short. 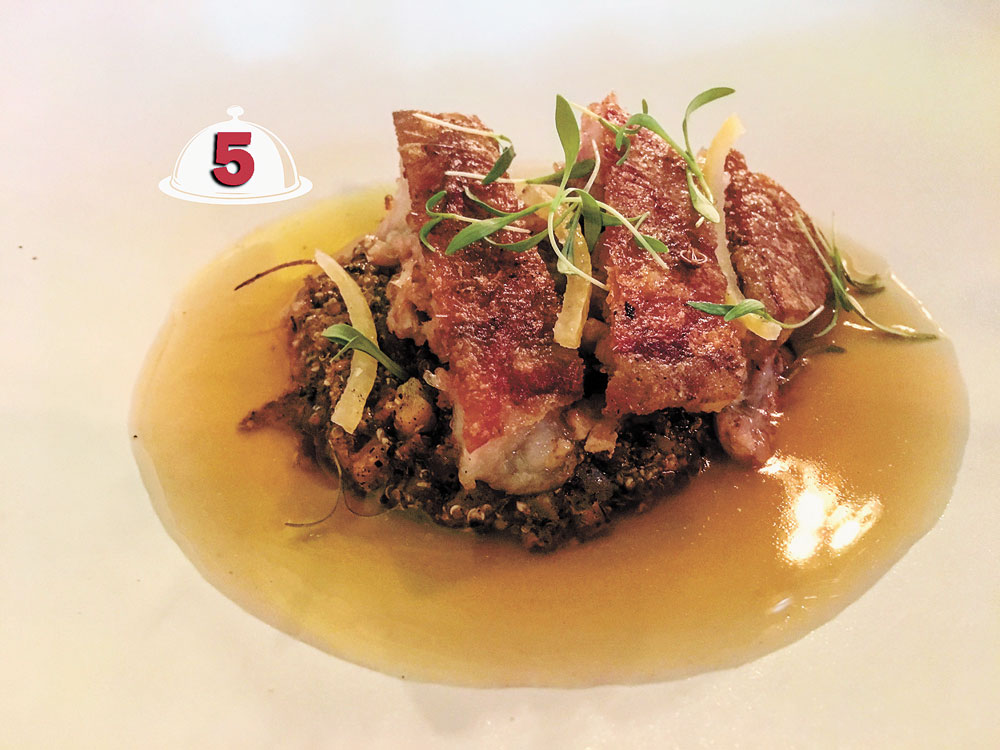 The final two courses seemed, in retrospect, to be a kind of “in summation” of the entire meal’s trajectory, that is, intense acid to endorphin-pumping umami.  Dessert number one featured three different preparations of mandarin: a parfait, a sweet salsa and a foam, with a cookie crumble on the side.  The overall effect was reminiscent of a key lime pie, another smack across the nose echoing that of the very first course, one which, however, was followed not by more acidity, but by a plunge back into satin-sheeted luxury in the form of a lightly caremelized sweet-savory rice porridge with cinnamon ice cream, toasted white chocolate, puffed rice and, as a final savory bass note, a papyrus-thin crisp made of soy sauce.  It looks strange and off-putting on paper, but worked a charm. 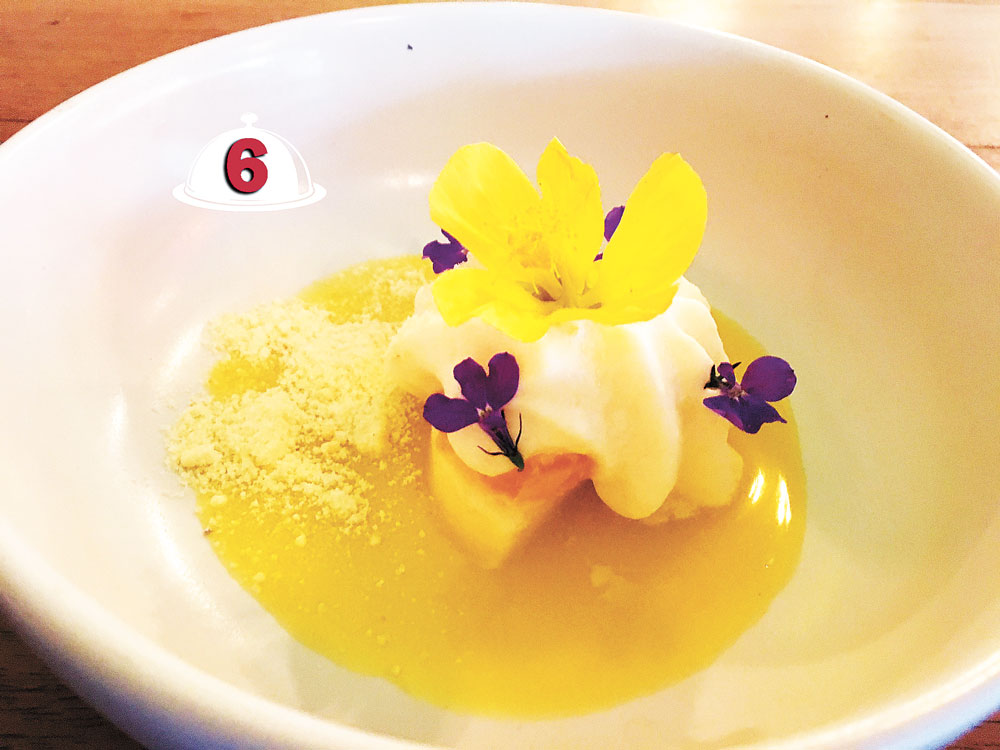 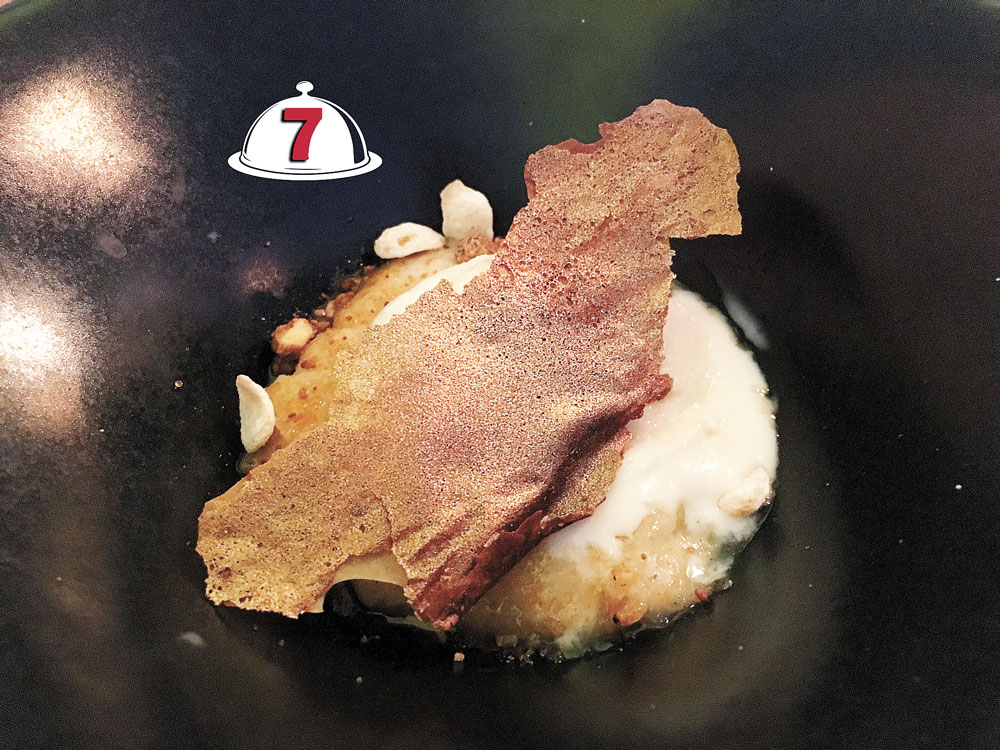 Not to imply that a heady daytime swill of booze is in anyway objectionable – some say the magic hour of late afternoon is, in fact, the perfect time to imbibe – but lunch at Alcalde didn’t see me much interested in drinking, aside from the previously-mentioned glass of wine and a small glass of sherry with dessert.  However, interested parties ought to explore that side of the restaurant; their wine list is voluminous and features – along with the usual suspect nationalities such as Italy and France – well over 20 selections produced and bottled in Mexico.  There’s also a promising cocktail list and a whole Leaving Las Vegas galaxy of hard liquor, fortified wines and liqueurs.

Alcalde (Avenida Mexico 2903, Vallarta Nte.) is open everyday of the week from 1:30 -11 p.m., except Sunday, when it closes at 5:30 p.m.  A reduced menu – with no tasting option – is served everyday except Sunday from 4 to 7:30 p.m.; otherwise, the full a la carte menu and tasting menu are available lunch and dinner.

For more details, go to alcalde.com.mx.