Along with these high-profile characters, ordinary people are spotlighted too, such as Matias Romero, a Mexican envoy who resided in Washington D.C. during and after the U.S. Civil War.

A big cast of modern characters also populates the play. One is “Mr. North” as the author himself when he was a history teacher at the American school and struggling to unearth the story of the collaboration between Lincoln and Romero to aid Mexico in its struggles against French interference, a collaboration that was impeded by Lincoln’s assassination, which is depicted in the play.

It is always a pleasure to see young people, some of whom are no doubt experiencing a degree of terror at being on stage, give their all with great success. In this case, the junior- and high-school players were augmented by a couple of teachers in major roles, apparently due to a shortage of male actors. Thus, history teacher and New Yorker Chris Hopper played “Mr. North,” while geography teacher Julián Flores portrayed the august Maximiliano I himself. 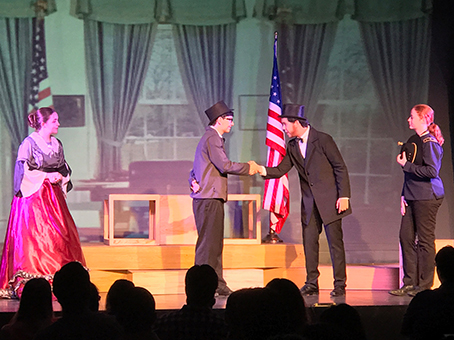 Historical characters Mary Todd Lincoln, Matias Romero, Abraham Lincoln and General Ulysses S. Grant are brought to life by young actors from the American School of Guadalajara in the play “Lincoln and Mexico – The Untold Story” by prolific author and American School educator Michael Hogan. Charlotte Walker, a ninth-grader who played Grant, noted that “even if there are not enough boys, the show must go on!”

Speaking of the Emperor of Mexico, keep in mind there is talk of bringing the play to Ajijic and that some, like me, may be sketchy on the fact that Mexico had a European emperor (from the Habsburg line, no less) as well as on other features of this turbulent era: the embattled presidency of the beloved Benito Juarez who fought against Maximiliano for years, the U.S. Civil War and its considerable connection with the War of the French Intervention, and what the heck the French were doing in Mexico at all. So, although Hogan’s play, based on a book he recently wrote, leads the historically challenged along the storyline with enough clues to avoid confusion, potential playgoers may want to brush up on history. 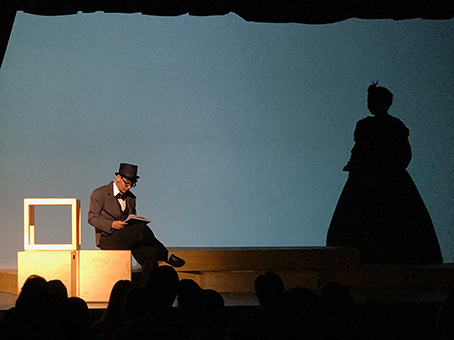 The play’s multi-media set, sound and lighting were likewise inventive—and light years away from the high school productions of my past.

The play’s four performances were introduced by U.S. and Mexican dignitaries, who highlighted the longstanding friendship between the two countries and contrasted it with the current tension, which Mexican diplomat and Lakeside resident Carlos Gonzalez Magallon, for one, minimized as just “a bump on the road.”

After the performances, author Hogan, who has been with the American School since 1990 as a humanities chair and liaison with the U.S. State Department’s Office of Overseas Schools, called the production “a peak moment … that I shall treasure in my heart forever.”