Last November, a little thrift store named Otra Vez opened its doors to the residents of La Manzanilla and became an instant hit with both the Mexican and expat communities.  Operating solely with donations and dedicated volunteers, it is now in its second year with no signs of slowing down. 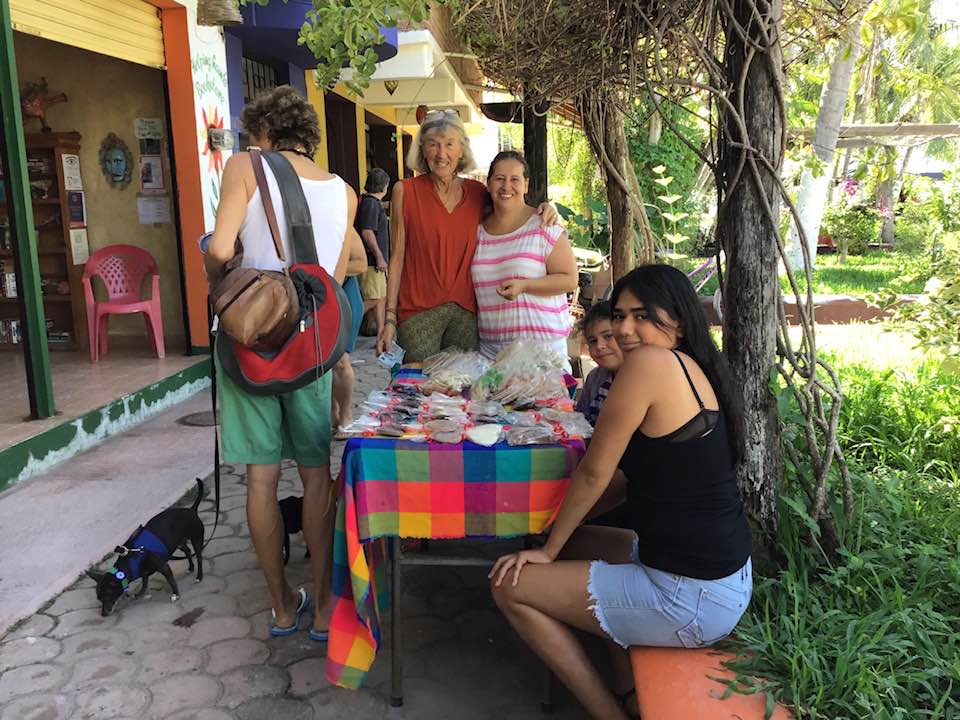 The volunteers, along with Stephanie Wunner who spearheaded the idea, meet several times over the season to decide how to allocate the profits to best help people in the community. This includes purchasing school uniforms for children to sponsoring various charities such as La Manzanilla’s Recycling Program, the Annual Swim for the Elderly and the Ambulance Fund.

Starting this Friday, and for the entire week following, sales from Otra Vez will be donated to Second Chance Rescue Centre for abandoned dogs waiting to be adopted in their “forever home.”

But Otra Vez doesn’t stop creating new ideas on lending a hand.  Recently a new family moved into town from Mexico City and the mother visited the shop.  During the conversation with Wunner, who was operating the store that day, the woman mentioned that she baked oblais, a thin wafer-like cookie in five different flavors, and also made chocolate treats.  Diana Manzo Barbosa became the first recipient of a “micro loan” from Otra Vez from which she was able to buy the necessary items to launch her business.

Wunner said more of these loans will be made available to persons in the pueblo who need a little help in starting up a business.

Annual swim for the elderly

January ended on a high note for some of La Manzanilla’s residents.

On Sunday, January 26, aquatic enthusiasts participated in the third Nadando por Ellos swimathon to raise funds to improve the quality of life and dignity for five of the pueblo’s poverty stricken elders.

Too old to generate income and some with no family to provide basic care, these folks live in desperate conditions.  Lety Hernandez, owner of Estudio Maymara, could no longer stand by and do nothing.  She and her husband Conrado headed the team of volunteers to organize this amazing event, which featured lifeguards, as well as other helpers, in boats, kayaks and paddleboards, always within reach of the swimmers in case of distress.  Even non-swimmers joined in this event by receiving pledges for walking the beach from Lora Loka’s restaurant to the town cemetery and back.

The funds will be divided equally among the five recipients, and be administered by Hernandez.  She will meet with them individually to discuss their immediate needs, which include medicine, food, new mattresses, etcetera.  The balance of their funds will then go into a bank account to be used as needed.  This is a wonderful outcome made possible by the members of the community. 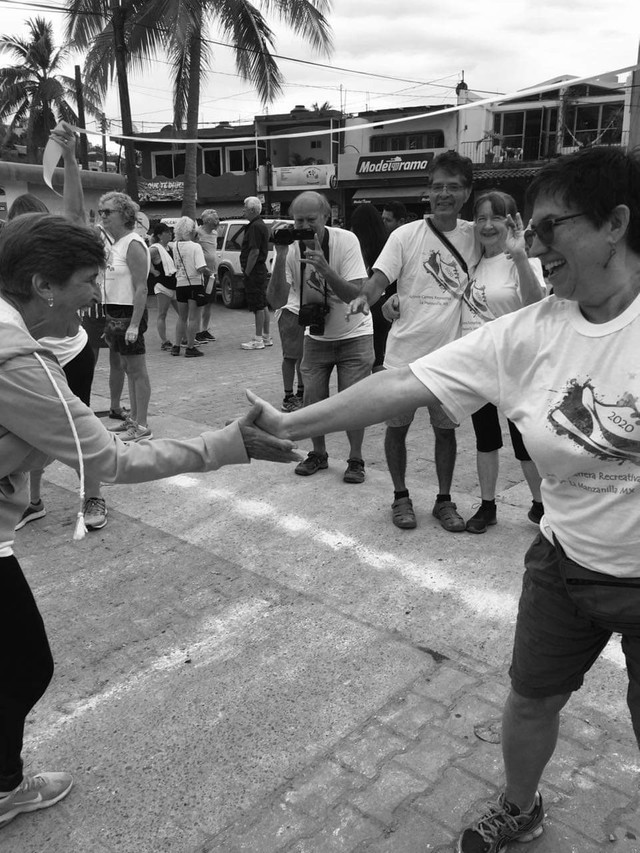 Early Sunday, February 2, the streets of La Manzanilla were filled with the sound of hundreds of footsteps!  Both large and small, each one signified another step into fun and fitness.  La Manz’s sixth annual Family Fun Run was underway!

Coordinated by Activos Gym and sponsored by 40 local businesses, 234 participants, adults and children – and even some of our four-legged amigos – joined in this event. Each was given a t-shirt and member’s number. There were no categories assigned, nor would prizes be awarded to the top places.

This event was not a race or competition.  It was solely devoted to fun, family, health and fitness in our community.  Prizes would be awarded by raffle tickets received at each kilometer marker along the route.  This format meant that everyone – adult or child, runner or walker – would receive an equal chance at a prize. Each person could also choose to complete either the 2K or 5K course.

Water stations were also set up at each of the kilometer markers on the course. Volunteers staffing these stations handed out water and a raffle ticket to each participant along the way. The person’s number was recorded as well.

Congratulations to Bonnie Gilmour, Activos Gym and all the volunteers who made this day happen.  A big thank you as well to Mother Nature who held off the rain until after the Fun Run was completed. 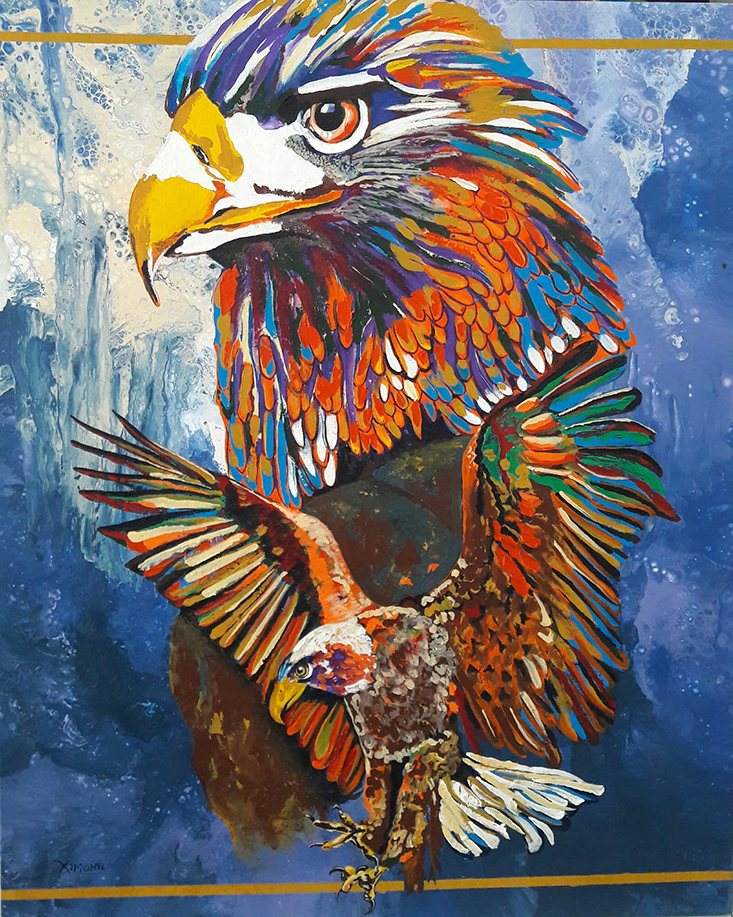 “En extinción y con descendencia” is one of the pieces by Colombian artist Eva Mondragon that will be up at Galeria La Manzanilla at a meet-the-artist reception Friday, February 21, 4 to 7 p.m. Calle Perula 83.

Thirty-two teams have signed up to participate in this Saturday’s (February 15) tournament.  Sponsored by the Bocce Ball Committee, the games will begin at 9 a.m. in front of Bahia Azul Restaurant.

Come out for a day of competitive fun, cheer on your favorite team, or be an armchair coach while sipping a frosty margarita.  Funds raised from the tournament will be combined with those raised at the Bocce Dinner Dance and used to begin renovations on our “triangle parkette” in the centre of town.

• Spoken Word Invitational: Monday, February 17 to be held at Casa Luz, from 7-9 p.m.   Donations at the door.

• 16th Annual “A Night Under the Stars:” Saturday, February 22 in the main square of La Manzanilla, from 6-9:30 p.m.  It includes not only a silent auction and bid card, but a delicious Mexican dinner and a show featuring local talent, folkloric dancers, live music and kids’ performances – all for 200 pesos!  Tickets will be sold at the Friday tianguis on February 14 and 21. and will also be available at the event.

• La Catalina Student Art Show: Tuesday, February 25, located at the Foundation complex behind the Kinder School from 5:30-7 p.m.  Young artists will be displaying and selling their artwork.