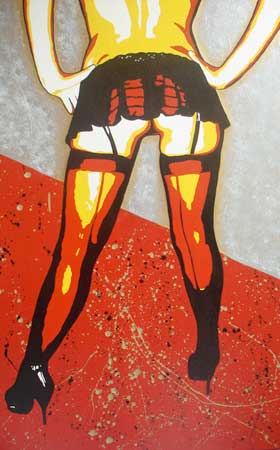 “Sin Tabues” (Without Taboos) opens with a cocktail reception on Saturday, September 24.

Twenty-two multi-media pop-art style works will range from the mildly titillating to the blush producing.

Also showing is Ajijic jewelry designer Jose Melendrez, who will be erecting an installation entitled “Art in the Public Bathroom.”

The exhibition has been approved by municipal authorities and remains in place until October 10. Be sure to take it in – if you dare.

The Naked Stage Reader’s Theater will present readings of Harold Pinter’s “Betrayal” on Friday, Saturday and Sunday, September 23, 24 and 25, at 4 p.m. at the theater located at Plaza de la Ribera (formerly Sol y Luna) at Rio Bravo 10A in west Ajijic.

The story begins in 1977 with a meeting between adulterous lovers two years after their affair has ended. From there, the play moves back in time, through the various stages of their affair to its beginning in 1968. It’s brilliantly simple in form, sad, hilarious and human. It was first produced by the National Theatre in London in 1978 and premiered on Broadway in 1980.

The play is directed by Liz White and the cast includes Patsi Krakoff, Don Rausch, Allen McGill and Keith Scott.

This production is recommended for adults only. Tickets require an 80-peso donation. Reservations are a must. Call Ann Pinkerton at 766-5986 or email This email address is being protected from spambots. You need JavaScript enabled to view it.. If you have reserved seats but can not attend, please telephone to cancel.

Prior to the reading, or after the reading, the Don Pedro Restaurant is open for lunch and dinner. A no-host bar is available. During the September readings, manager Daniel is offering two-for-one dinner and two-for-one margaritas. Enjoy. 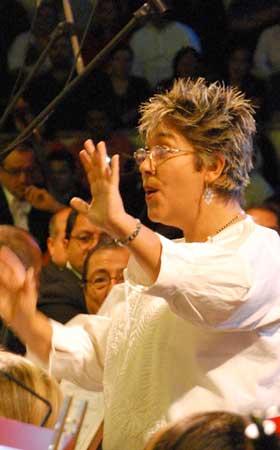 VIVA la Musica! is making sure Lakesiders are in for a real treat when “Contrapunto,” an acapella choir based in Guadalajara, shows up on Thursday, September 29, 7:30 p.m. at St. Andrew’s Anglican Church.

This versatile chorus was founded in 2001 and has an impressive repertoire ranging from Pre-Columbian American music to Broadway melodies. The ensemble is composed of eight members, all professional singers who have studied at prestigious music schools in Mexico.

Founder and director Lupita Chavira has a long list of achievements and keeps her charges well on their marks and notes.

Tickets are 250 pesos for VIVA members and 300 pesos for non-members. They are on sale now at the Lake Chapala Society (LCS), Diane Pearl, Charter Club Tours and Auditorio de la Ribera del Lago.

Susan Q. Miller and Donna Mansfield would like to investigate whether there is local interest in forming a scriptwriting group. The group would be made up of those who write stage plays, film scripts or musicals and provide support and critique functions for members. They stress that this will not be a playwriting class.

The ladies are thinking that actors would read/sing scripts for audience comment and therefore provide further input for the writers.

Larry Reeves is looking for three more stories – up to 5,000 words – to be read at the October 11 event to raise money for the Collums Education Fund. Stories relevant to Halloween will be favored.

Reeves also needs stories for the monthly meetings on a continuing basis. Contact him at This email address is being protected from spambots. You need JavaScript enabled to view it..

Lakeside Little Theatre (LLT) is holding auditions for the play “Greetings” by Tom Dudzick on Friday and Saturday, September 23 and 24 at 10 a.m.

LLT encourages and welcomes everyone interested in acting (new or experienced) to attend auditions for any of this season’s plays.

Don’t forget the Lakeside Little Theatre Kick-Off Party for all paid members and season ticket holders on Saturday, September 17, 5-7 p.m. at the theater. Wear your serape. It’s a Mexican theme.

The “Noche Mexicana” on Saturday, September 24, 5 p.m. will raise much-needed funds for the Pro-Auditorio project.

To be held on the patio of Auditorio de la Ribera del Lago, the  evenings’ entertainment features the Ballet Folklorico of San Juan Cosala, along with Mariachis Los Gavilanes and Ricardo and Blanca. The ticket price of 250 pesos includes a delicious Mexican meal and one margarita. Tickets are already on sale now.

Several artists of the Ajijic Society of the Arts (ASA) will exhibit their work at a reception hosted by Casa del Sol on Saturday, September 17, 11 a.m. to 3 p.m.

Casa del Sol is located at Javier Mina 7 in Ajijic.

The public is invited to a reception on Friday, September 16 (Mexican Independence Day) to view recent works by Ajijic native Efren Gonzalez.

One of this region’s most accomplished painters, Gonzalez will be presenting a new series of watercolor works featuring horse and water themes, among others.
The festivities are slated for La Paloma B&B located at Juan Alvarez 56 in Ajijic from 4-6 p.m. Refreshments will be served. Please RSVP to (376) 766-4140.