Tipping is woven into the fabric of Mexico’s social culture, chiefly because of its informal, cash-driven economy. 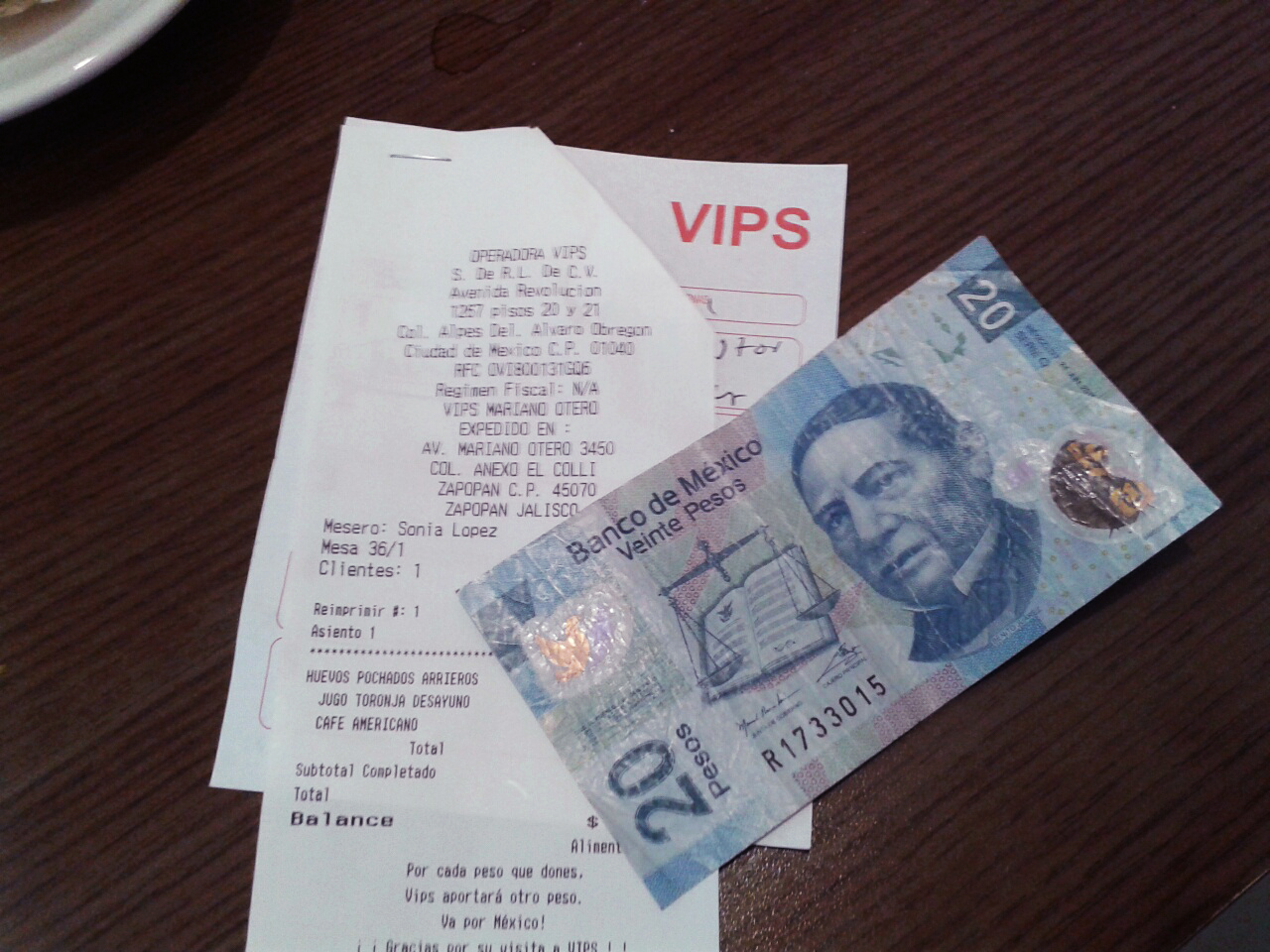 Most people working in Mexico’s service industries earn modest wages and rely upon tips (propinas) to augment their weekly take-home pay. Mexicans by nature earnestly aim to please, sometimes to a fault.

That’s when they tell you something with the sincerest smile, clearly knowing they cannot deliver on it. “Si, señor, I’ll have your driveway redug and replaced this afternoon.”  So it would be a rare event for a visitor here not to feel that genuine Mexican sense of “glad-to-be-of-use-and-service” at whatever need you had. The following instructions come from a variety of sources, including Mexicans themselves.

Situations where a tip is customary include the porter at the hotel who carried your bags; the concierge for booking a table at a local restaurant or the person who arranged a taxi for you; the attendant who helps with your bags on arrival and on departure, the person who washed your windscreen at the stop-light – and don’t forget the street busker at the stop light. He’s there to lighten your day after driving in Mexico’s apocalyptic traffic, which is often as chaotic as a motorized army in retreat.

Leave your hotel’s room maid a small tip of between US$1 and US$5 (equivalent in Mexican pesos) for each night’s stay spent at the hotel. If you’re staying more than one night, it’s a good idea to leave the tip daily as chambermaids work on a rotating basis.

Masseurs and masseuses. These workers are usually tipped in Mexico. The tip is at the discretion of the patron. I’d add that the massages in Mexico are like the people: demonstrably sensitive and caring.

Baggers. These people do not receive any payment other than the tips they are given. Tip them a few pesos. One or two pesos per shopping bag is a good rule of thumb. Add on 10 to 20 pesos more if they help you take the bags to your car.

Garbage men. Unless you don’t mind having your garbage pile up like a biblical plague.

And of course, tipping restaurant wait staff is similar to what you would do north of the border: 10 to 15 percent  for a meal without an alcoholic drink. Fifteen to 20 percent when the meal is accompanied by an alcoholic beverage and you are pleased with the service.

Car parks in Mexico’s bigger towns and cities are often kept under “patrol” by men or women who helping drivers find a free space, and keep an eye on the cars. It’s optional but thoughtful to pay two-five pesos as you depart.

Some restaurants – the most well-to-do establishments – have an attendant working in the restroom, keeping it clean and tidy, a job nobody really ever aspires to. “No, papa, I want to be a restroom attendant. I can always go into law if things get bad.” After you wash your hands, consider leaving a small gratuity for the attendant. But most importantly, do wash your hands.

Depending on whom you speak to, it isn’t necessary to tip hair stylists or barbers, even though this is done regularly north of the border. But this is so commonplace, that to avoid doing so could mean you wind up looking like Kim Jung Un.

Not necessary (but nice)

You do not need to tip cab drivers. Some taxis are not metered, so negotiate your price before you get in. But do tip the cab driver if he assists you in any way with luggage or entering your seat.

Tipping is discretionary and varies according to the region and whether you are in a tourist city, where workers are in a constant state of looking after tourists who seem to have just dropped in from Alpha Centauri. But there are instances where tipping isn’t required.

You don’t tip construction workers, unless they have performed some extra duty not included in the original construction effort. Do not offer them beers or tequila until they have come down from the ladders.

You do not need to tip service people who come to your house from service companies like Telmex or CFE. And if you’re waiting around for Telmex for hours and hours, let a loved one know you’re there in case people report you missing.

You don’t tip nurses at hospitals or clinics, unless they have offered services not required of them, such as driving ill patients home.

Airport shuttle. It is not necessary to tip your driver, but it is considerate to give 10 pesos per bag if the driver helps with your luggage. This assumes of course that the airline has landed your luggage with you.

And it’s always a mystery what to do at an all-inclusive resort. But here’s the story according to several travel agents: tipping is ostensibly included. The establishment says employees earn a portion of the cost of the hotel take. Other agents argue that more often than not, this doesn’t happen.

So the upshot is to remember that these service staff depend on tipping for their livelihoods. To play it safe and liberal-minded, tip. In any event, it is appropriate to tip for drinks delivered to the table.