(On the front page of the December 23, 1965 issue.) U.S. Consul General and Mrs. Joseph J. Montllor extend a cordial invitation to all American citizens in the Guadalajara area to drop in at their new residence during an open house which they will hold on New Year’s Day. The Montllors moved last week to their new home on Paseo de las Aguilas at the corner of Ottawa.

Jalisco’s warm-hearted community of retired Americans, for the most part transplanted far from home ties and families, is finding its joy this holiday season in the bright eyes and delighted laughter of the hundreds of children with whom it is sharing Christmas. Big parties for the 1,100 children at two metro-area schools are this week’s contribution to seasonal good will by some 60 American paraplegics. American Legion Post Three will host the 60 children of the Salvation Army orphanage to a Christmas party with Santa, gifts and toys. La Luz Guild has kitted out 70 girls from the La Luz orphanage with new sweaters and nightgowns this Christmas and is holding a Three Kings party January 6 for the girls. Women of the breakfast club who have been distributing morning repast to needy pupils of the Fermin Riestra school have put up money for a party and given new clothes to those without. The YWCA girls have knitted sweaters for the children of the Dermatology Institute, a sanatorium for those afflicted with leprosy.

Thanks to a series of wedding photos taken during a marriage celebration, Guadalajara police succeeded in identifying and arresting two elegantly garbed pickpockets, who robbed the bride, groom, family members and guests of 15,900 pesos before escaping undetected. A police detective noted that in photographs taken at the event a man and woman always appeared close to the newly wed couple. Family members said the pair were completely unknown to them. The criminals confessed, saying they had learned of the wedding through a social note in a newspaper.

Unprecedented growth in the past decade has transformed the once somnolent Jalisco capital into an incipient concrete giant. To combat the growing dehumanization of downtown, a battery of architects, designers and urban planners have created an ambitious 40-billion-peso project to restore the city’s former “dimension, character and dignity.” Their objective is to restore the city to its residents, for their use and enjoyment. The plan of action includes unearthing the city’s character from beneath the welter of billboards, neon lights and power lines, create new parking provisions and ease traffic flow by prohibiting all on-street parking in the area within Avenida Acalde, Calle Independencia, Santa Monica and Juarez.

Love it or abhor it, but there’s going to be no hermit’s hideaway from next year’s most spectacular sporting highlight in the republic – the staging of the 1986 World Soccer Championships. The futbol pageant is not only a multimillion dollar industry and the world’s most talked about sporting event outside of the Olympic games, but also promises to boost Mexico’s flagging tourism and focus the world on the nation’s most important asset: Mexican hospitality. The 52 elimination games will be played in nine Mexican cities, including Mexico City, Guadalajara, Leon, Toluca, Puebla and Queretaro. To the relief of the nation’s politicians, the media is soccer focused even now, offering a post-quake surge that should dominate the nation’s small talk.

Those who still feel an occasional earth tremor are not suffering from an overdose of earthquake anxiety after the September temblor that devastated Mexico City and Ciudad Guzman. Seismologists say the aftershocks of a quake, called replicas, continue for up to four months following the quake as the earth readjusts itself to its normal condition. Guadalajara is fortunate to have the type of subsoil and geographic condition that has allowed it to miss suffering the ravages of quakes that have hit Mexico City and other areas of Jalisco. One notable exception was a quake in May of 1818 that toppled Guadalajara’s cathedral.

Prices have risen 53 percent in Puerto Vallarta during the first nine months of 1995, according to a study by the Geography Department of the University of Guadalajara. This hasn’t affected tourism in the port because the peso has lost more than 100 percent of its value against the dollar since the December 1994 devaluation. However, many Mexican families have been forced to change their buying habits to cope with the new economic situation. This figure is relatively high compared with the nation’s inflation rate over the same time period (40.77 percent), said the report. The lifting of government price controls on many staple items at the beginning of the year contributed to this inflation.

Two former ex-presidents of Mexico faced off against each other this week with the entire nation looking on. In an unprecedented confrontation, exiled Carlos Salinas de Gortari (1988-1994) all but accused Luis Echeverria Alvarez (1970-1976) and some of his followers of the 1994 assassination of PRI presidential candidate Luis Donaldo Colosio. Salinas also took a tougher stand than ever regarding suspected money laundering and illegal enrichment by his brother Raul, and offered to return to Mexico to face his own critics and accusers.

Michael Mathes amassed 45,000 volumes during 30 years of research on Colonial Mexico. With space in his home at a premium and no heirs interested in his collection, he decided to donate it to El Colegio de Jalisco, an institute for research and postgraduate studies in social sciences and humanities, with an accent on Jalisco history. Mathes accompanied his priceless collection in a trailer truck from his home in San Francisco, California to the Mexico-U.S. border at Reynosa, Tamaulipas, after which he flew to Guadalajara to see that all went well. It took four months for Mathes to pack the books, working five hours a day. It took only 35 minutes to unload the 400 specially packed boxes, whose content more than quadrupled the size of the Colegio’s library. The collection contains some of the first books ever printed on the American continent in the 16th century.

Despite enjoying popularity among gay travelers for years and having a sizable gay population, organizers in Puerto Vallarta finally threw a pride parade for the first time. Approximately 250 participants (organizers had hoped for 1,000) marched for gay rights in the port city, later taking their demands to the mayor. The International Gay and Lesbian Travel association ranks the port among its top ten gay friendly destinations.

With backing from several environmentalist groups, a single Mezcala fisherman has brought state and federal authorities to their knees with a legal maneuver that blocks plans to treat lirio acuatico (water hyacinth) infestation in Lake Chapala with the chemical agent glyphosate. Fearing that his health and livelihood would be put in peril, Reinaldo Loza took his case to a federal judge, who issued a provisional suspension order. Although glyphosate has proven harmless in previous applications in Jalisco, the chemical employed to help the herbicide adhere to the weeds is highly toxic.

An immigration bill passed by the U.S. House of Representatives, which seeks to build a 698-mile fence along five sections of the U.S.-Mexican border, has raised the ire of the Mexican government, Hispanic groups and U.S. civil libertarian organizations. The bill also makes employing or providing assistance to illegal immigrants a criminal offense, but makes no mention of what to do with the 11 million undocumented people living and working in the United States. Many Mexican government and church officials called the measure “racist and xenophobic.”

Just fill out our reader survey HERE to enter your name in the contest.

A winner will be announced in the October 10 edition of the Reporter. 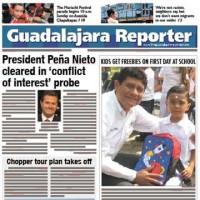 Like many countries around the globe, Mexico has a hidden population of illegal immigrants. But in contrast with the way the United States has perpetually postponed implementing a system to cope with millions of undocumented foreigners, the Mexican government has launched a temporary amnesty program that will allow many reverse wet-backs to come out of the shadows. 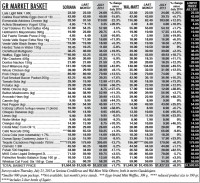 Expats in Mexico may take comfort from the fact researchers estimate that just seven percent of human communication is verbal. Tone of voice, facial expressions, posture and gestures account for the rest. While mastering Spanish requires hours of study, becoming fluent in hand signals is a whole lot easier. What’s more, it may prove just as useful.