A few novelties are planned during the upcoming 22nd International Mariachi Festival, the schedule for which was announced this week. 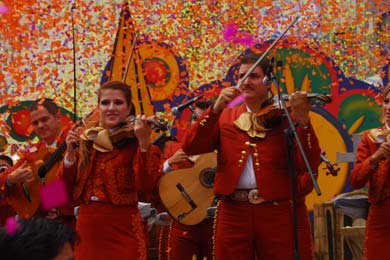 Given the ongoing work on the new Tren Ligero (subway) line in downtown Guadalajara, the annual parade will take place along Avenida Chapultepec on Sunday, August 30.  One side of the avenue will be kept open for the weekly Via RecreActiva car-free activity, while the bands, floats, dancers and equestrians will parade down the other side, from the Niños Heroes monument to Avenida Mexico.

A slew of music and dance events will be presented in the cultural pavilion and stage in downtown’s Plaza de la Liberacion during the nine-day festival. In addition, recitals by Mexican and international groups are scheduled in major city malls (Andares, Plaza del Sol, etc.), restaurants, parks and glorietas.

International bands this year will fly in from the United States (five in total), Colombia (three), Peru (two), and Canada, Ecuador, Costa Rica, Bolivia and Sweden (one each).

Six flagship gala mariachi concerts will take place at the Teatro Degollado on August 28 and 29, and September 1, 2, 3 and 4. They will feature the biggest names in the mariachi genre, including Mariachi Vargas de Tecalitlan, Mariachi de América de Don Jesús Rodríguez de Hijar, Mariachi los Camperos de Nati Cano and Mariachi Nuevo Tecalitlan.  Several of the performances will also include a full orchestral accompaniment.  Tickets for these emotional concerts cost from 450 to 2,150 pesos.