“Meticulous and delicate” is how one biographer describes the collection of large-format, charcoal drawings by Martha Pacheco, considered one of the principal artistic figures in Jalisco and probably most renowned for her masterful and unflinching portrayals of local people whom the rest of us might prefer to forget. 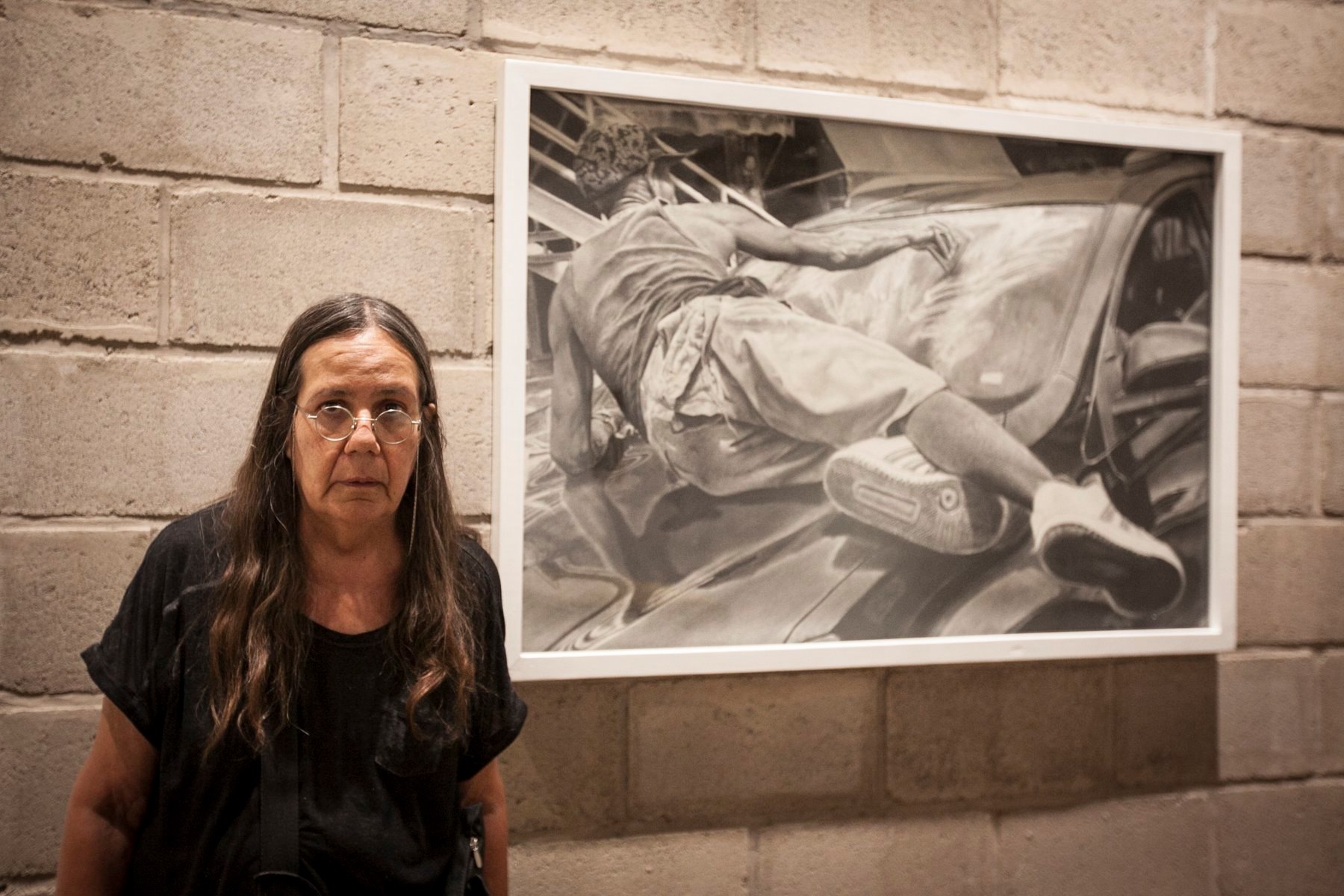 The show, which marks the re-opening of Guadalajara’s graceful Ex Convento del Carmen after a six-month closure (due to the change of state government), consists of about 20 powerful pieces by Pacheco, mostly super-realistic, black-and-white scenes of men on the streets, wearing shorts, sneakers, jewelry, baseball caps and tattoos, and working at cleaning windshields or juggling in clown get-ups, or just looking at the viewer, their expressions reflecting the harshness of an existence entwined with the vagaries of weather and traffic.

“Ecos de la Calle” (Echoes of the Street), as the show is entitled, is the latest of Pacheco’s legendary encounters with marginalized people; her earlier and perhaps most famous – verging on scandalous – being cadavers in morgues. Some of these large drawings are so complex and detailed in perspective and anatomy that they must have been done with the aid of a camera (and they do have a photographic realism and chiaroscuro), yet the show includes some of the artist’s sketchbooks, establishing beyond a doubt her mastery of draftsmanship. 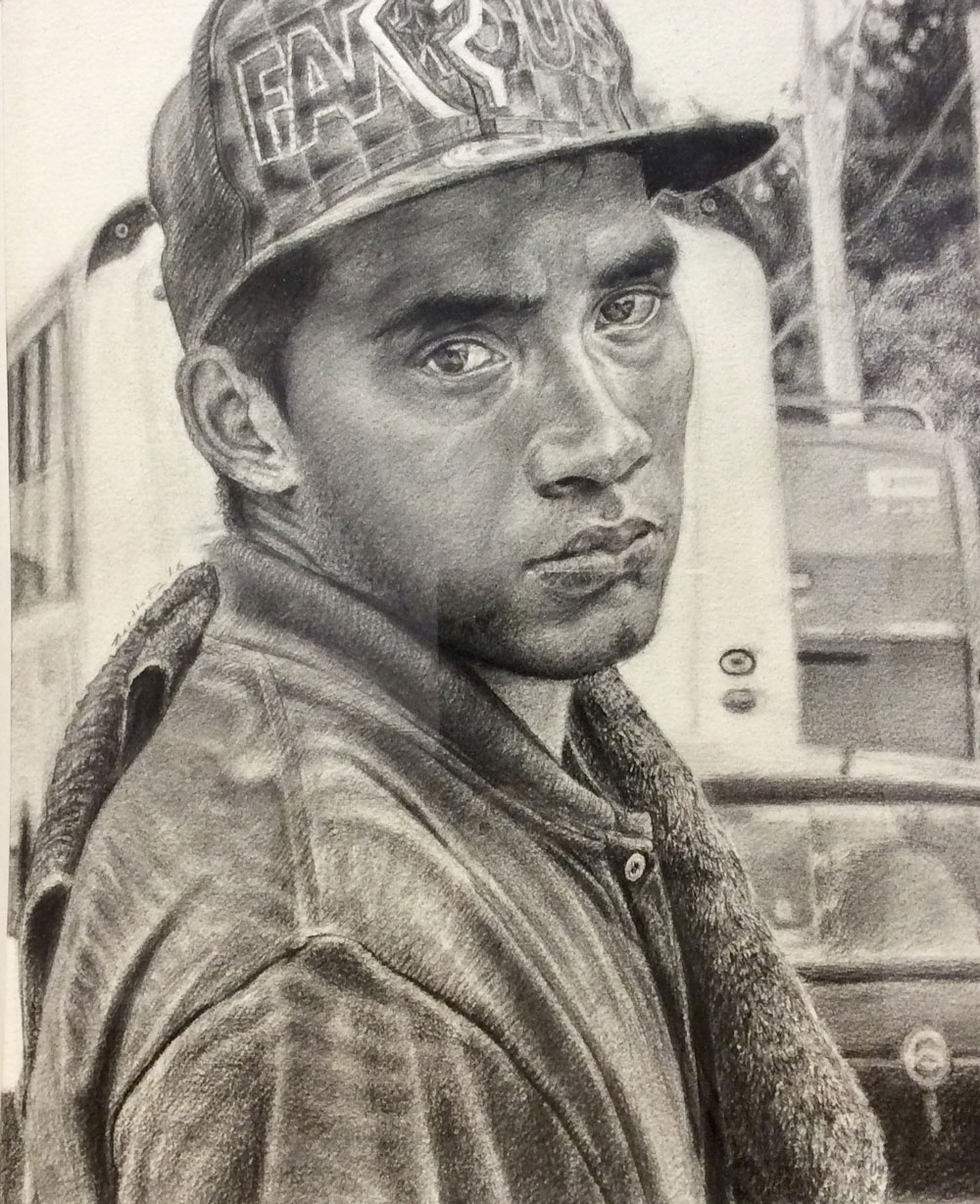 Pacheco, who graduated from the Escuela de Artes Plásticas de la Universidad de Guadalajara (School of Fine Arts of the University of Guadalajara) in 1981, seems to be an artist on the order of Toulouse-Lautrec, enduring harsh experiences early in life that land one a bit off the beaten track and with a predilection for unusual subject matter. In the case of Toulouse-Lautrec, this was sometimes circus figures, alcoholics, maids and prostitutes; in the case of Pacheco, corpses, people in insane asylums and, now, street workers. 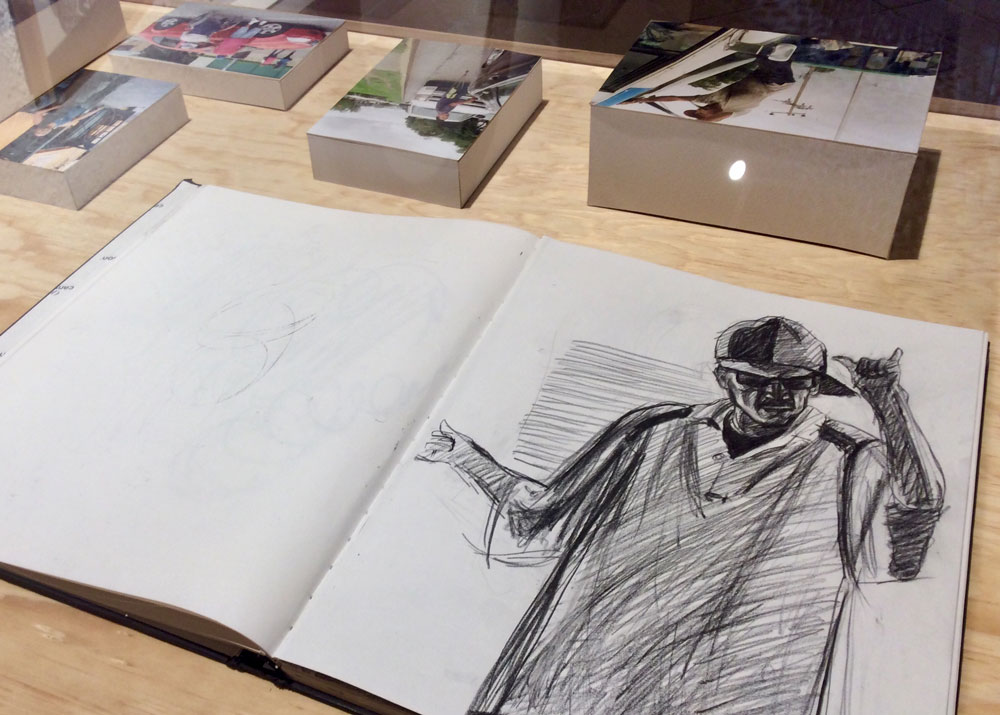 Biographers say Pacheco feels the pain of her subjects and has a politically left-wing orientation that makes her desire social change. As such, she was an apt choice by the current Jalisco administration and its Secretary of Culture, who profess a strong orientation toward marginalized people.

This engrossing exhibition, in perhaps the city’s most charming venue, with a pretty plaza, church and restaurant (Chai) right across the street, is accompanied by a smaller show upstairs – “Amproprifications” by Maximilian Marcoll. Supported by the local German institutions Bezirk, Goethe Institut and Goethe-Zentrum, the show – black-and-white, geometrical representations paired with music from audiophones – will interest those with an interdisciplinary orientation.

Both this exhibit and “Ecos de la Calle” by Martha Pacheco will remain until September 8 at the Ex Convento del Carmen, Avenida Juarez 638 two blocks east of Federalismo, and a little west of Guadalajara’s centro historico. Open 10 a.m. to 8 p.m. Tuesday to Saturday. Sunday 10 a.m. to 6 p.m. Closed Mondays.