Diana Leidel is an accomplished artist living among us in Chapala. She originally came to Lakeside through the 360 Xochi Quetzal Artist and Writer’s Residency Program, which gathers creatives at the QQ Hotel and offers time and space for artists to work on their craft. She and her husband, Ron Janoff, enjoyed their residencies so much that they now divide their time between New York City and Chapala. 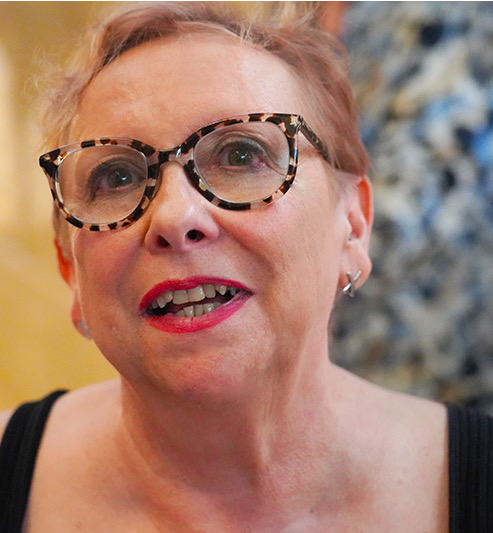 As an art director and creative director for magazines, Leidel worked for “Women’s Day,” “Dance” and the international publication “Pointe Magazine,” created for professionals and dancers in training. Her eventual work for “Playbill” afforded her the time to focus on her own art and develop projects that had meaning for her. Leidel’s work over the years has been varied but a common thread has been the study of women. A true feminist, Leidel says, “I have always been interested in social justice issues and my work is often a reflection of current events and media.”

An installation piece titled “Wild Women” featured 50 women of accomplishment most people will be unfamiliar with. Video projections of their names were projected onto a collection of white dresses, suspended from the ceiling. Text and an audio track of their voices provided information about each woman. No images were shown. “I wasn’t really interested in what they looked like as that is what is usually portrayed,” Leidel says. “For me, it was all about their accomplishments as an artist at Auschwitz, a Spanish bullfighter or a World War II aviator.”

A certified New York City tour guide, Leidel leads tours, including one called “The Extraordinary Women of Washington Square.” Her tour tells the secrets of known women and women who should be celebrated.