“The Same Deep Water As Me” continues this weekend with curtains up Friday and Saturday, February 22 and 23, 7:30 p.m., and Sunday, February 24, 4 p.m., at Lakeside Little Theatre. 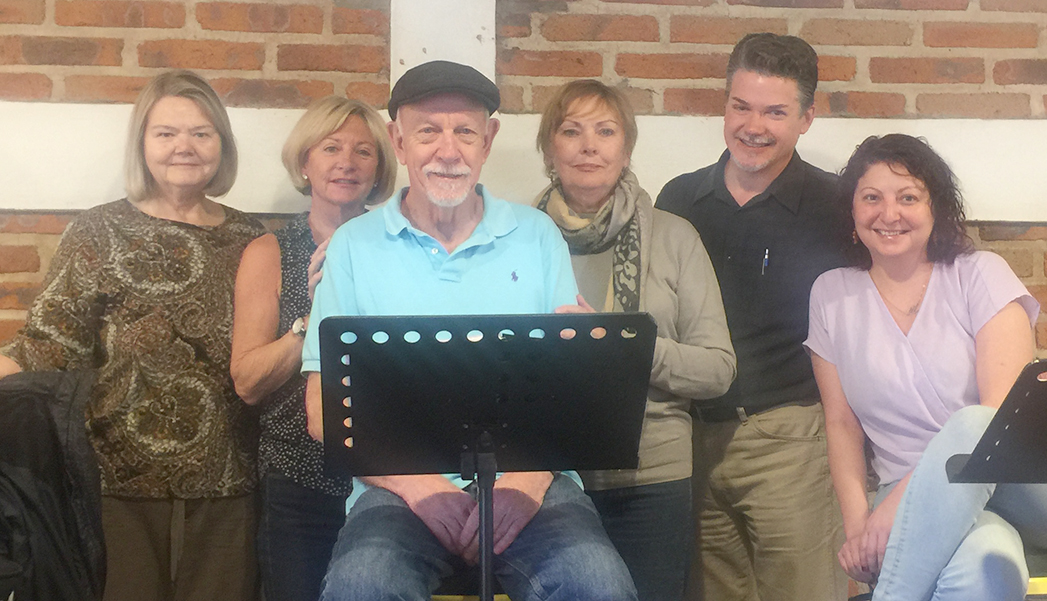 Tickets, 600 pesos center and 400 pesos sides, are available one hour before concerts at the Auditorio. Information: festivaldefebrero.com.

Levi Kreis brings his O’ Canada concert, honoring Canadian stars he has performed with, Friday and Saturday, February 22 and 23, with shows at 4 and 7 p.m. on both dates. 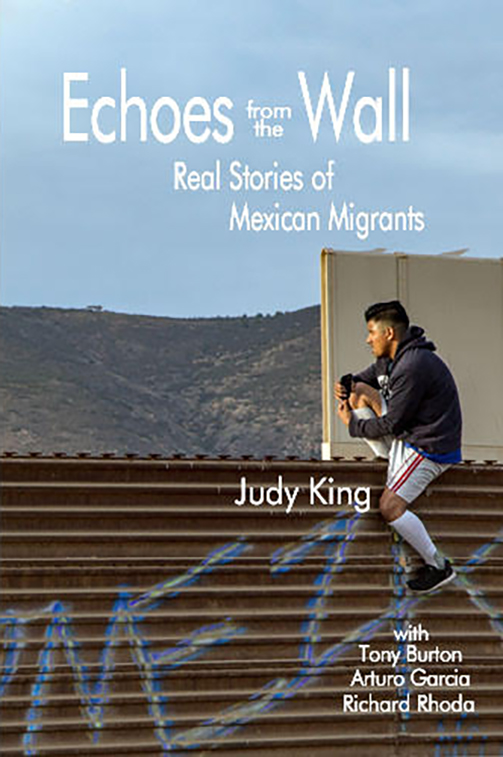 Dwight Blake returns with his Memories of Motown concert, backed by the Groove Brothers Band. Enjoy tunes by Marvin Gaye, Al Green, The Temptations and more Monday and Tuesday, February 25 and 26.

At age 85, Ruth Bader Ginsberg has developed a lengthy legal legacy while becoming an unexpected pop culture icon. This film presents her journey to the U.S. Supreme Court.

James Tipton was a beloved columnist for the Ojo del Lago for many years, best known for his monthly installment of “Hearts at Work.” Tipton died last May but left one last book of poetry, “The Alphabet of Longing and Other Poems,” to be discovered posthumously and cherished as his poetic masterwork. The narrative is autobiographical, relating the poet’s 13-year retreat in the high desert of Colorado, where he sustained himself as a beekeeper while searching for what constitutes the purposeful life. Fred Koesling, veteran actor and friend of the poet, will read this powerful work on March 4, 4 to 5 p.m. at St. Andrew’s Anglican Church in Riberas. The event is free and open to the public. 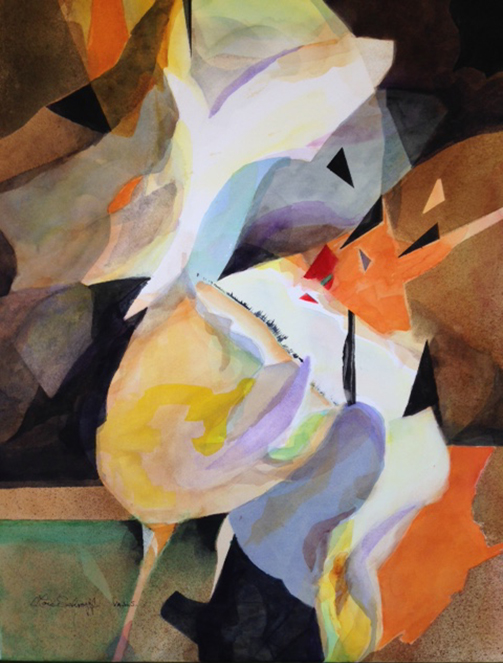 Zhanna Sosensky will give a presentation at the next meeting of the Ajijic Society of the Arts on Monday, March 4, 10 a.m. at La Bodega Restaurant. Sosensky was born in Russia at a time when being left-handed and using the left hand in school was not allowed. She found it difficult to use her right hand when writing or drawing even the simplest of objects.

However, she was able to express herself by painting on objects such as furniture. In 2014 in her 70s, she moved to Ajijic and decided to start using her left hand again and started painting images, and telling stories. Even with no formal training, Zhanna enjoys painting on wood. Her iconic wooden frames are her trademark, because they form part of the painting itself.

The exhibit, set to run through the end of the month, is  titled Visión de Mar y Tierra. It comprises 14 acrylic paintings, one mixed media work and two objets d’art reflecting a unique perspective on sea and earth represented in colorful scenes of shipyards, vessels and railway cars encountered in different Mexican ports.

Radamez is a graduate of the University of Guadalajara’s School of Plastic Arts. He is currently concentrating on painting after a 10-year career in the field of creating stage scenery. 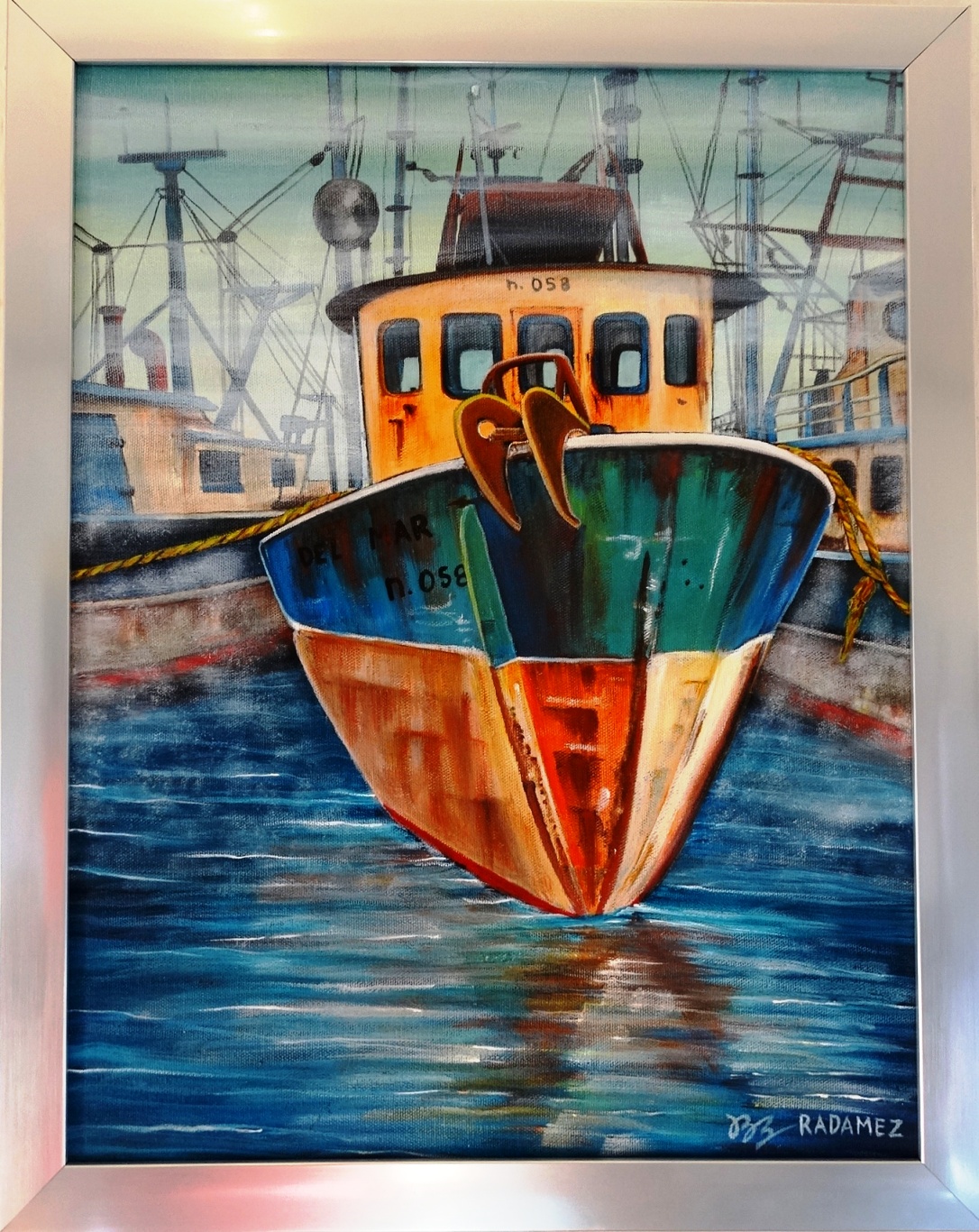 The Rotary Club of Ajijic presents Rising Stars, a scholarship fund-raising dinner featuring music from the 1940s to the ‘80s by The Great American Songbook, Friday, March 1.

The band features Paul Brier on vocals and keyboards, Jimmy Barto on vocals, trumpet and Flugelhorn, Bob Myers on vocals and guitar and Francis Dryden on drums, playing hours of music to dance to. Cocktails begin 5 p.m., dinner and speakers at 5:30 p.m. and dancing until 9 p.m. Dress is formal or dressy.

The event is held at the Instituto Tecnologico Mario Molina on the Libramiento. For tickets, 600 pesos, call Chuck, 333-483-9200. Information: rotaryajijic.org.

Wild and newly single, Julie throws a late night party. In the kitchen, Jean and Kristina clean up as the celebration heaves above them. Crossing the threshold, Julie initiates a power game with Jean – which rapidly descends into a savage fight for survival. Set in a North London house near Hampstead Heath, Julie examines how class divisions and middle class ennui exist today, and can result in similar tragic results.

Storytelling is the theme of the 2019 Lake Chapala Writers’ Conference, March 6 to 8, and covers writing articles, short stories, novels and plays. 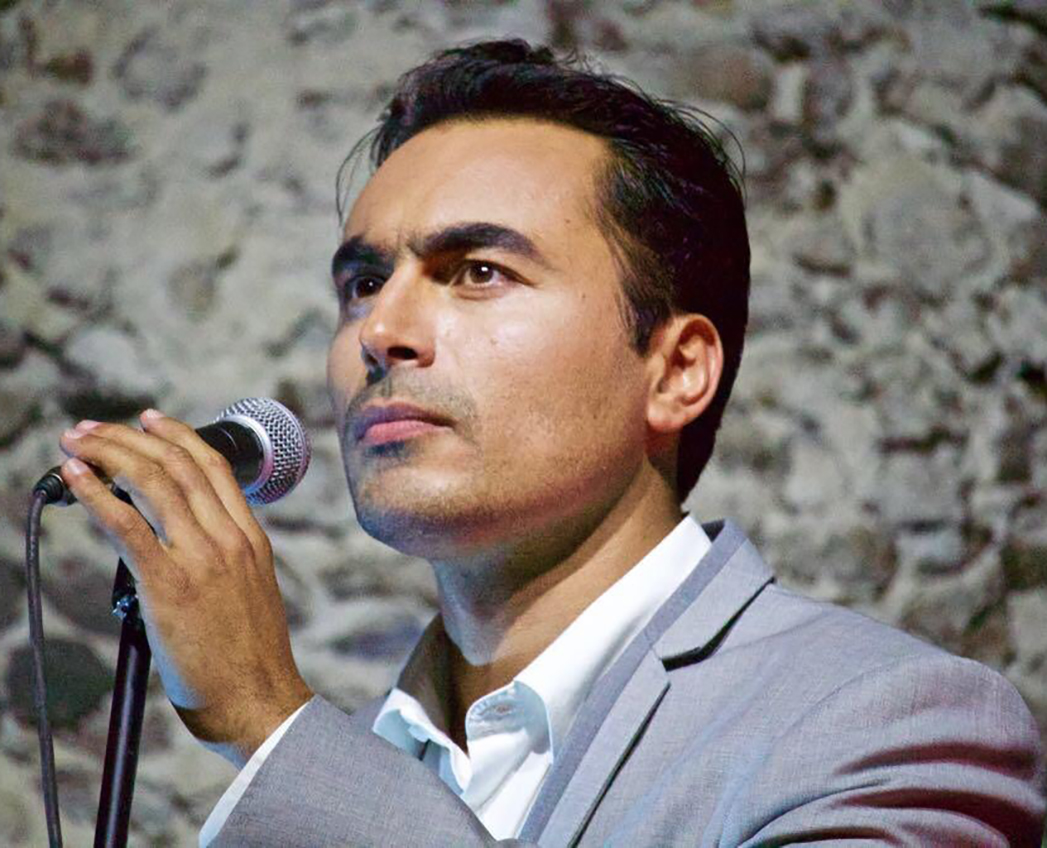 Speakers include Mark Boyer, Rose Grayson, Canadian bestselling author Roberta Rich, author Eric Witchey, uthor Kali VanBaale. Former Dell/Doubleday editor Sandi Gelles-Cole will be available to critique your manuscript and to offer suggestions to make it print ready. Early registrants will have an opportunity to have a one-on-one session to pitch their writing projects to literary agent Angela Rinaldi.

The 18th annual fundraiser to support the production of the Pasion de Cristo Ajijic 2019 is an auction of Ajijic art masters held at La Nueva Posada, Friday, March 8, 2 p.m. 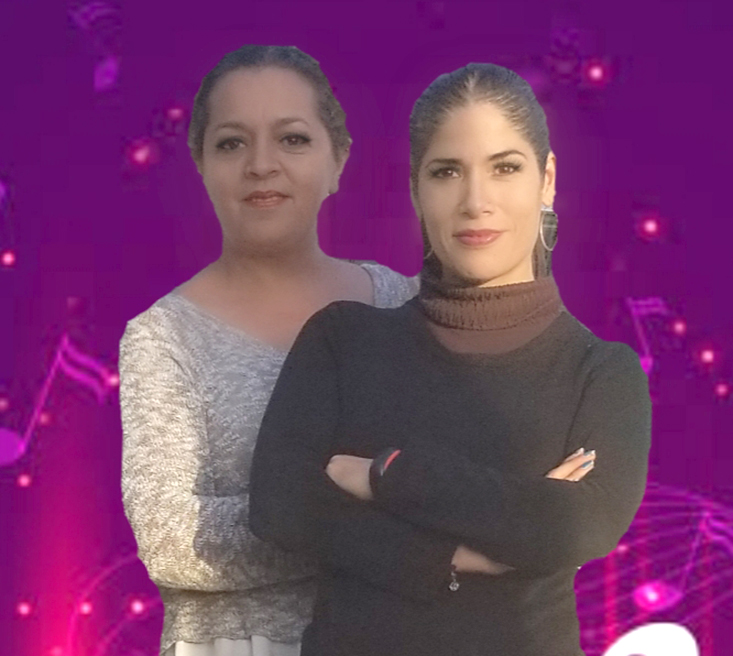 Rezzonante will perform original work and music by Joel Haynes, Sonny Fortune, Robert Glasper and more in a journey from pop to jazz to funk, fresh and unique that will have you rockin’ in your seat, Sunday, March 10, 5 p.m. at the Auditorio de la Ribera.

The band is comprised of Sofia Renee, a singer, instrumentalist and songwriter from Monterrey; Juan Manuel Ayala, a bassist, composer and musical director who is active in various jazz projects, including the Klaus Mayer Jazz Quartet, Ernesto Mercado Quartet and Kingsmith; Esteban Zamora, a drummer/percussionist and producer  who has been featured with pop and jazz artists from all over the world; Chapala guitarist Alvaro Martínez Medeles; and saxophonist and music teacher Eleazar “Chuko” Soto, a professor at the International Yamaha Academy in Guadalajara who has played at the top jazz festivals in Mexico. At present he leads the Rezzonante project and performs in the band Triálogo, as well as composing and recording. 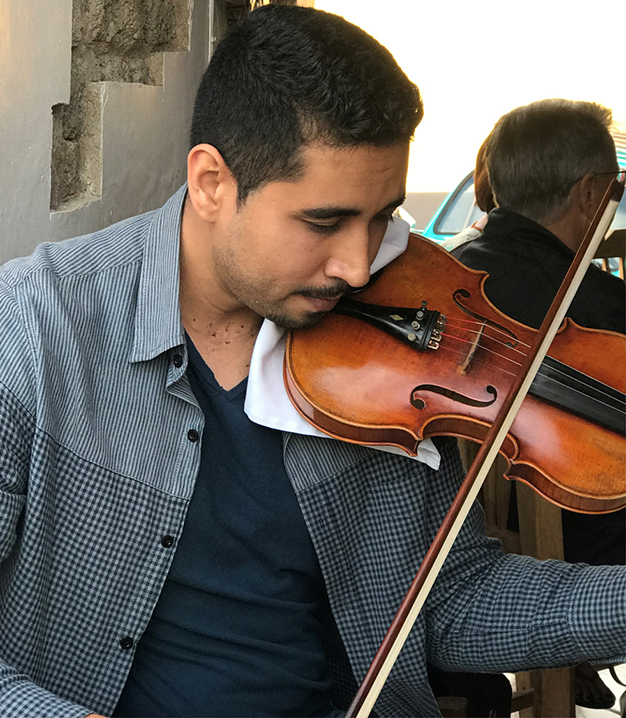 A benefit luncheon with cabaret performances will be held for violinist Victor Garcia, March 10, 11:30 a.m. to 2:30 p.m. at Manix Restaurant. This well-known and very talented, local Mexican musician that has recently been diagnosed with thyroid cancer. The luncheon will include a pig roast with all the trimmings, as well as several vegetarian options. The entertainment will start at 1:30 p.m. and includes performances by Ignacio Garcia, Patteye Simpson, Doug Voet, Suzanne Bullock, Mike Liesenbach, Karen Procter, Michael Reason and, potentially, Victor himself. Tickets, 550 pesos, are available at Diane Pearl. Call Manix to make a reservation after the purchase of their tickets, (376) 766-0061. Manix is located at Ocampo 57, Ajijic. Valet parking will be available.

A benefit for the students of the Centro Educativo Jaltepec will be held Sunday, March 17, 12:30 p.m. in the home of Linda Buckthorp.

The event will take place to the background of the music of Cole Porter, sung by Frank Sinatra.  The all-inclusive afternoon begins with Timothy G. Ruff Welch playing a medley of cocktail music while Jaltepec alumni serve hors d’oeuvres they have prepared. Bottomless glasses of wine and a three-course luncheon follow, finishing with a presentation by Bill Dingwall.

Buckthorp will transform her home into an intimate concert setting for 30 guests. Only 15 seats are still available. Tickets cost 1,200 pesos.