A million or so words have been devoted to account for the immense popularity in the Spanish-speaking world for the mythical screen character Cantinflas. This outpouring of analysis is particularly rich in the wake of the release of the film “Cantinflas” last week. 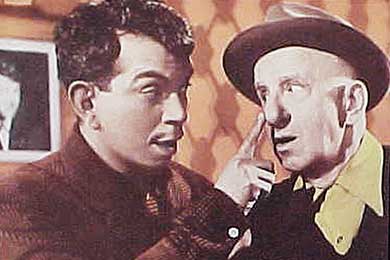 The creator of the internationally famous comic personality, Mario Moreno, who died in 1993 of lung cancer at the age of 81, defined the appeal of Cantinflas simply: “He’s a poor little guy with great feelings. But he doesn’t let anyone push him around. He just wants to help when he sees injustice, even though he’s probably the one who needs help. Still he wants to do great things, to intervene, to be important.”

This ethical and psychological stance is central to the international popularity of the Cantinflas character. It is equally central to the impact this fictional personality has had not only on Mexican comedy, filmmaking and the entertainment industry, but on Mexican society.
Cantinflas stirred Mexican audiences because Moreno gave his Everyman of the Lower Class visible social value. What Moreno’s peladito — poor little guy — did had results of some kind (a startling idea for the poor in the early 1940s) that the wealthy and the middle classes had to pay attention to.

This caught the affection of the emerging middle class that was created by the sudden economic growth Mexico’s economy enjoyed during World War II. New recruits to this economic class, whose families had been stuck on the pelado rung of the income ladder, saw in Cantinflas an acceptable version of their past. It was a version leeched of the past’s unrelieved grimness and bitterness, a version that burnished the nobility of the poor’s struggle against their condition and spotlighted their warm attachments to family, friends and others in bad straights.

It was fiction, but only to some extent. Moreno, who as a youth had performed in the carpas — tent shows that played the poorest barrios — knew well the tribulations of the poor and drew heavily on this experience to base Cantinflas’ cavortings solidly in reality.

The marvelously humorous verbal anarchy that Moreno invented for Cantinflas was responsible for much of this character’s success. There are a number of legends on how that came about, but clearly it is modeled on the Spanish language’s tendency for lushness of style, often over content, and on the irrepressible compulsion Mexican  political and military leaders  traditionally have for vagrant circumlocution.

Born in 1911, Moreno, like his contemporaries, had been subjected to an avalanche of political verbiage issued by competing factions in Mexico’s 1910-1917 Revolution. This pompous din did not ease with the end of the fighting. It became worse as Marxist double speak was added to traditional political bafflegab.

Yet Cantinflas’ riotous flights of verbal fancy were not to be confused, entirely, with nonsense. Within his acrobatic linguistic detours, he was most often mischievously poking fun at the person he was talking to or the subject he was talking about, usually both.

He was not the first to call attention to the absurdity of official speech. But he was the most successful at adapting it for use as both a weapon of considerable subtlety and a technique of tickling the public’s funny bone.

Among the many things his hardscrabble carpa times had taught Moreno was the lesson of poverty. He was certain he did not care to remain a poor man or the kind of artist waiting for money men to give him an opportunity to engage in his art.

Two years after he began doing well in films, he had the good sense to form his own motion picture company (called Posa S.A., which eventually became Cantinflas S.A.) That 1938 move gave him total ownership of the 47 films he made. That in turn made him a millionaire many times over.

However, such business acumen caused some of his less agile colleagues and several envious politicians to grumble. In fact, his popularity, which appeared to have no limit in the 1950s and 1960s, is said to have made some political folk so resentful that one presidential administration got all tangled up trying to pare down — with no visible success — his wide appeal.

Whenever asked about this, Moreno sideslipped the matter just as gracefully as Cantinflas bamboozled irresponsible bureaucrats in the film, “El Ministro y Yo.” That film, famous for its portrayal of a grotesquely — and therefore realistically — inefficient government agency, brings boisterous cheers from Mexican audiences every time it’s shown.

Moreno’s motion pictures, such as “El Ministro” and his final film in 1981, “El Barrendero” (“The Streetsweeper”), annually grossed more at United States cinemas than any other Spanish-language films of the time.” For instance, “Barrendero,” released north of the border in 1982, grabbed 3.5 million dollars (a considerable sum at the time) in its first run just in Texas and California.

In light of the fact that Moreno’s films were budgeted at around one million dollars, it is clear that the profits in rentals in all of the United States, in Mexico and the rest of the world for that single film made Cantinflas’ creator a very wealthy man.

When Moreno died, eulogies arrived from around the globe for the man who found a way to make the “little guy” weigh a lot in the world.