Several tons of rhetoric have been uttered and written about Miguel Hidalgo y Costillo, the Catholic priest who is known as the “father” of Mexico’s independence movement. Almost all concern the “Cry of Dolores,” known more simply as the Grito, his famed 1810 call for independence from Spain.

A number of popular versions of that event have Father Hidalgo celebrating a midnight mass for a “multitude” from the belfry of his small church in the pueblo of Dolores, then following it with a call to arms: “Viva la Virgen de Guadalupe! Viva la Independencia! Viva Mexico!” 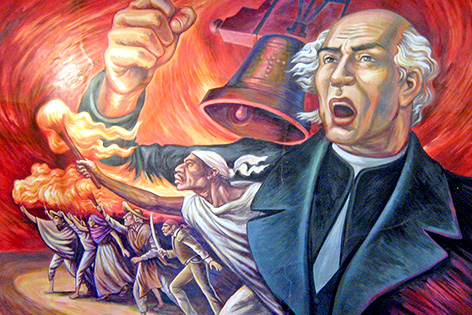 This is an inspiring and romantic image. But hardminded Mexican historians suggest it is not quite accurate. In fact, they say no one really knows precisely what Hidalgo said that early morning of September 16, 1810.

It is even unclear who set the revolt in motion by alerting Hidalgo that the plot of the Queretaro Literary and Social club (to declare Nueva España independent of the Spanish Empire) had been discovered by Crown authorities. Ignacio Allende, a creole (a Spaniard born in the New World), a professional military man and captain of the Royal provincial regiment at San Miguel el Grande (today’s San Miguel de Allende), is the top candidate for many historians as one of the messengers. Some chroniclers of the event suggest that he alone made the Paul Revere-like ride through the night of September 15 to Dolores to warn Hidalgo. Some say he rode from Queretaro, some say he set out from San Miguel. Other writers declare that Juan de Aldama, a captain in the San Miguel regiment, rode from Queretaro, where the vice regal authorities had begun arresting the conspirators, to warn Allende.

From there, according to this version, the two officers raced through the night to warn Hidalgo to hide. Others say Aldama alone carried the warning from San Miguel to Dolores, where Allende and Hidalgo had just concluded a meeting.

To hide, to fight

However they got there, Allende and Aldama seem both to have been with Hidalgo in Dolores the night of September 15-16. The two officers, trained military professionals, planned to go into hiding. Hidalgo, with no military experience, decided to go to war. One credible chronicle of the event describes Hidalgo telling Allende that the only thing to do now was to go “hunting gachupines.” (Gachupines means spur-wearers, referring to New Spain’s rulers.)

Aldama’s portrayal of the event says that the 57 year-old, balding, gray-haired priest quickly declared, “Caballeros, we are lost. There is no alternative but to go after the gachupines.” Aldama apparently thought this was a “hasty” decision.

When Hidalgo spoke publicly that morning (September 16) he did not address a multitude. Dolores was not a large pueblo. More probably, he roused his household, those peons who worked for him and his close friends in town. They, in turn, awakened others. The jail was opened, its prisoners released and the Spaniards of Dolores locked up. By this time daylight was approaching, and the cura of Dolores ordered the church bells rung, hoping that would hurry Sunday churchgoers from the countryside to an early assembly.

There are three contemporary accounts of what Father Hidalgo said in the early morning of September 16 to those who had been roused out of bed and those country folk who had wandered into the dim streets of the tiny town to see what the commotion was all about.

Certainly, Hidalgo did not shout “Viva Mexico!” simply because there was no Mexican state existing at that time. And most historians doubt that he mentioned “independence” or “liberty,” for Hidalgo himself later pointed out that the Indians and mestizos he addressed did not understand what those words meant. And since, by all accounts, the idea of utilizing the image of the Virgin of Guadalupe as a symbol of the independence movement did not occur to anyone until later when the insurgents were marching through the pueblo of Atoncillo, Hidalgo probably did not shout “Viva la Virgen de Guadalupe.”

Jose Sotelo’s contemporary account describes Hidalgo delivering a brief call to arms from the window of his home. Another contemporary report by Pedro Garcia says that Hidalgo told his few sleepy listeners that, “The moment for our freedom has arrived!” Long live America, for which we are going to fight!” Aldama indicates that there was no single dramatic conclusion to Hidalgo’s speech.

Other historians, working from contemporary testimony, say that Hidalgo said something on the order of, “Defend your rights! Long live Ferdinand VII! Death to bad government! Death to the gachupines!”

The contradiction in this call to arms by the insurgents then and later seems to have never occurred to Hidalgo, Allende or Aldama. They were calling on their followers and potential followers to kill gachupines in the name of a gachupin king.

Ferdinand II was the sullen, incompetent son of the weak King Charles IV, who had been forced off the Spanish throne by Napoleon and supplanted by the French leader’s brother, Joseph Bonapart.

Hidalgo, some historians contend, told his followers in the chill early morning of September 16 that the gachupines were plotting the worst treason imaginable: They were conspiring to deliver the Spanish Catholic Church and the Spanish Empire into the hands of the non-believing French, to recognize the usurper, Joseph Bonapart. This account says that the priest called on all loyal Americans and Catholics to defend the cause of Ferdinand VII and throw out the traitors of America. “Viva el Rey! Viva America! Muera el mal gobierno! (Death to bad government!).”

There is, however, little argument among historians regarding the cry Hidalgo received: “Mueran los gachupines!” (Death to the Spaniards!) This was to be the most accurate battle cry of Hidalgo’s six-month-long War of Independence.