Before 11 a.m., April 22, a reader called one of the REPORTER’s contributors about downtown explosions. Then relatives of staff members rang, asking about the sector Reforma blasts that had killed hundreds, they said, possibly thousands. 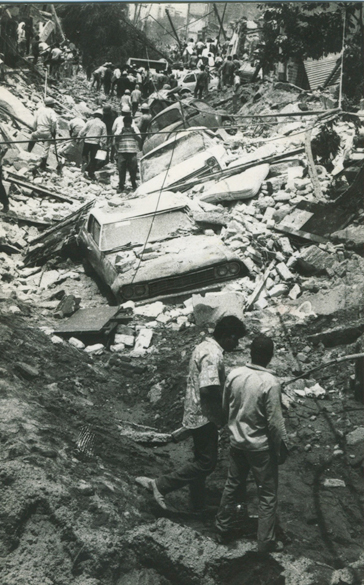 There is always a tendency among veteran journalists in Mexico to be skeptical of first reports of catastrophes. The magnitude is sometimes exaggerated by informants shocked by disaster. So it wasn’t until an acquaintance whose relatives live in the southeastern side of Guadalajara, where the explosions occurred, called to say police had cordoned off the area, that the extent of the catastrophe began to become clear.

Climbing among the ruins of  Calle Gante in Sector Reforma a short time later was a jolting experience, as covering tragic stories always is. The entire street, and all the houses along both sides, had been blown apart as far as one could see. Victims were still being pulled from the rubble. Volunteers, Red Cross, police and other rescue workers clambered and dug—often using bare hands—through the debris with quiet intense hurry. Their cooperation and dangerous hard work in heat and choking dust were admirable.

Questions were asked, pictures were taken; then it was back to the office to meet this paper’s extended deadline.

There, telephonic chaos seemed to have broken out. Calls from CBS, NBC, Associated Press, United States newspapers poured in. The fax machine began to beep and give a series of chittering births. Washington, New York (many voices from there), Houston, Baltimore and places in between were calling for a report, any report of absolutely any kind.