1.  Popcorn comes originally from Mexico. Called momochtli, it was first prepared in pre-Hispanic cities in the center of Mexico. But nobody knew what to do with popcorn until ...

2.  The color television was invented in Mexico by a man named Guillermo González Camarena.  He was the first person to note that Zorro’s mask and shoes were a bright orange.

3.  The oldest university in North America is the National Autonomous University of Mexico (UNAM) founded by Charles V of Spain in 1551. Alumni continue to have their meetings at the Old Posada in Ajijic.

4.  The first printing press in North America was working in Mexico in 1531. It printed the first student loan applications for the UNAM.

5.  Mexicans do not eat the worm in the mezcal bottle. It’s Mexico’s joke on naive gringos. Back in the day, a little worm was plopped in each batch of mezcal to see if the alcohol content was high enough. If the worm died, enough alcohol. If not, the little fella got one more “for the road.”

6.  Mexico has 32 UNESCO world heritage sites. One of the most in the world.  Under consideration for number 33 is La Floresta Castle in Ajijic, historic for taking up a lot of room for no apparent reason.

7. Mayan glyphs have yet to be deciphered or translated. That’s why we have no idea what happened to the Mayans. Our best guess is the gnoshing on raw habaneros.

8.  The Copper Canyon (Cañon del Cobre) in the north of Mexico is four times bigger than the Grand Canyon. But still perennially deforested by cutter ants.

9.  The first and only in the world Rocket Belt, a personal flying pack, fueled by hydrogen peroxide, was built totally from scratch by Mexican engineer Juan Manuel Lozano. It will become quite popular for soaring over undesirable walls. 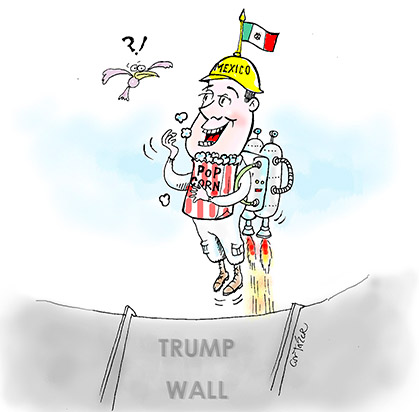 10. Mexico exports more manufactured products than the rest of Latin America combined. Not including Trump piñatas.

11. The largest pyramid in the world is the Great Pyramid of Cholula in Mexico. It is also the largest monument ever constructed by man without a rotating restaurant.

12. In Mexico, artists can pay their taxes with artwork. Mysteriously, they turned down my Popsicle-stick bridge.

14. Mexican General Santa Anna had an elaborate state funeral for his amputated leg. There was a mass, but no one genuflected.

16. Mexico is a Third World country. That does not mean a country that produces shoes and breakfast cereal from the same plant. “Third World” described unaligned countries during the Cold War. First and Second were the United States and its allies, and Russia and its “captivated followers,” respectively.

17. Today, the numbers have changed, the United States has gone to fourth or fifth world (at least 4.3). And Russia has become a quadratic equation.

18. Chewing Gum first popped here in Mexico. The Mayans again. They extracted sap from what was known as the sapodilla tree. It began to be exported to European countries and the United States, where the gum was first commercialized. Today, chewing gum is produced from other substances, which biodegrades over 4,000 years. So the gum you left on your first grade seat is, right now, rechewable.

19. Luis Ernesto Miramontes Cárdenas, a Mexican chemist born in Tepic, Nayarit, synthesized something called Norethisterone, which is the basic active compound of birth control pills.  Luis had 11 children. (I made that up.)

20. Mexico holds more free trade agreements than any other country in the world – 44.  According to The Financial Times, this is more than twice as many as China.  Now, if only somebody here could change a 100-peso note.