I wish to explain the new U.S. “tax bill and economic plan,”  drawn largely from past GDP, public debt and several Sudoku puzzles. 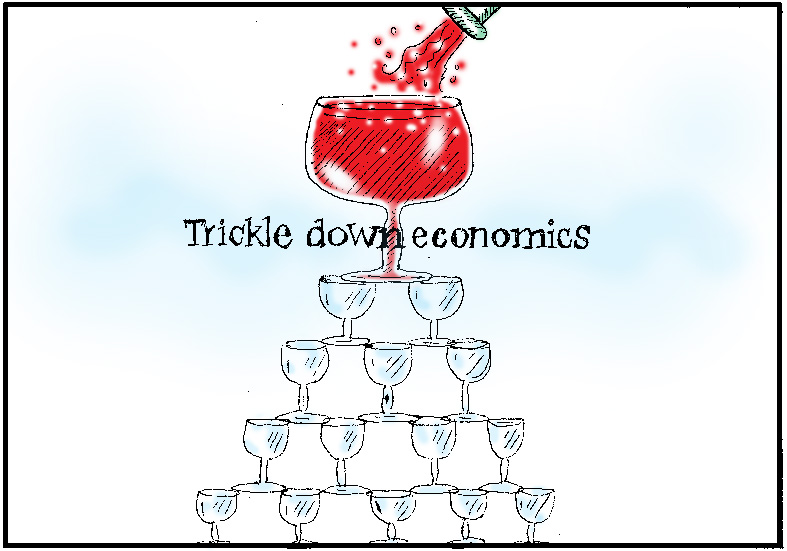 It seems fitting, because this Sunday will be the anniversary of the presidential inauguration of one of history’s most successful scam-artists. If you are a reader who happens to like the current U.S. administration and their economics, I will understand if you choose not to read further. But before you go, if you’re looking for even more economic genius, let me introduce you to Bernie Madoff.

But first, here’s my explanation of GOP economics for those of you still reading who think I don’t know what I’m talking about (because you’re frequent readers of my columns).

The way for have-nots in the United States (and, by implication, the world over) to move up economically, according to the current GOP, is by forcing struggling income earners to become more motivated. People are poor, conservatives insist, because they don’t have the personal motivation to be successful.  The implication here is that some 40 million Americans living at or below the (relatively high) poverty income level don’t want to be rich and successful. They just want to eat nachos, buy lottery tickets and safety-pin their pants up.

So what’s the GOP solution ... actually stated by several GOP congressmen and installed in the recent U.S. tax plan (and I’m not making this up): The poor are not poor enough.

According to GOP theory, mostly unspoken, you motivate the poor by taking assistance away, and reducing welfare programs, health subsidies, food stamps and retraining programs – entitlements they claim are enablers.  (Hey, getting millions of dollars handed to you from your father isn’t the only way to become rich.)

Then, according to conservative creed, once at the very bottom of the economic ladder, as in homeless and starving, the guy living out of a garbage bag is suddenly blessed by trickle down economics. From massive tax cuts to the rich, the impoverished guy learns a life-transforming lesson, and suddenly he realizes he’s responsible for his daughter not having her critical operation. And he sets out to become the Wolf of Wall Street.

We have sexism, racism, ageism, homophobia (also an ism), and now this U.S. administration and its leader have invented a new ism for us: “brokism.” If you’re broke, it’s your own fault and we don’t like you that way. So straighten up. That’s one of the reasons this administration flaunts its anti-immigrant ideas, and has such contempt for countries where dark-skinned people can’t afford to dye their skin orange.

Trickle down economics is a hoax. Yeah, a few people got jobs, and the rest ... get trickled on.  It does very little to redistribute wealth, and doesn’t sound very hygienic. They never tell you what color that trickle is. The State of Kansas tried it recently. It’s motto: Ad Astra per Aspera (To the Stars through Difficulties).  Well, they lived up to their motto; they’re seeing stars through economic disaster.

This idea about the lazy poor goes back to British economist Adam Smith, who said two centuries ago: “The real tragedy of the poor is the poverty of their aspirations.”  As in “Hey, lad,  what do you want to be when you grow up?” “Well, sir, I’d like to be a pickpocket and live in the sewers of London.” That’s how far back this economic nonsense goes.

Like drilling a hole in your head to cure your headache, as they did around that same time.  Mitch McConnell would argue, “Hey, the hole doesn’t upset your stomach like aspirin does.”

GOP economic rules can be summed up: Don’t just give a man a fish ... don’t teach him to fish either. A waste of tax-payer money.  Just throw him out of the boat.

I just read a note that somebody has stolen an important relic in Italy. Part of the brain of the St. John Bosco. There’s a fury all over Italy and parts of Europe to find it. Yet in the United States there isn’t a peep over the fact that brains are disappearing everyday in Washington.

There, I did all that without mentioning his name once – you know who I mean.  I want to have something to eat, without the acid reflux.