The Guadalajara Chamber of Commerce recently put on a display of a selection of paintings representing the most outstanding of Mexico’s 121 pueblos mágicos or magical towns, which have been recognized by the Secretariat of Tourism for the efforts of the local people to preserve their history, traditions and customs.

All the paintings are watercolors by Jalisco artist Jorge Monroy, whose mural “Under the Wings of Mercury” graces the foyer of the Chamber (Cámara de Comercio) on Avenida Vallarta in Guadalajara. 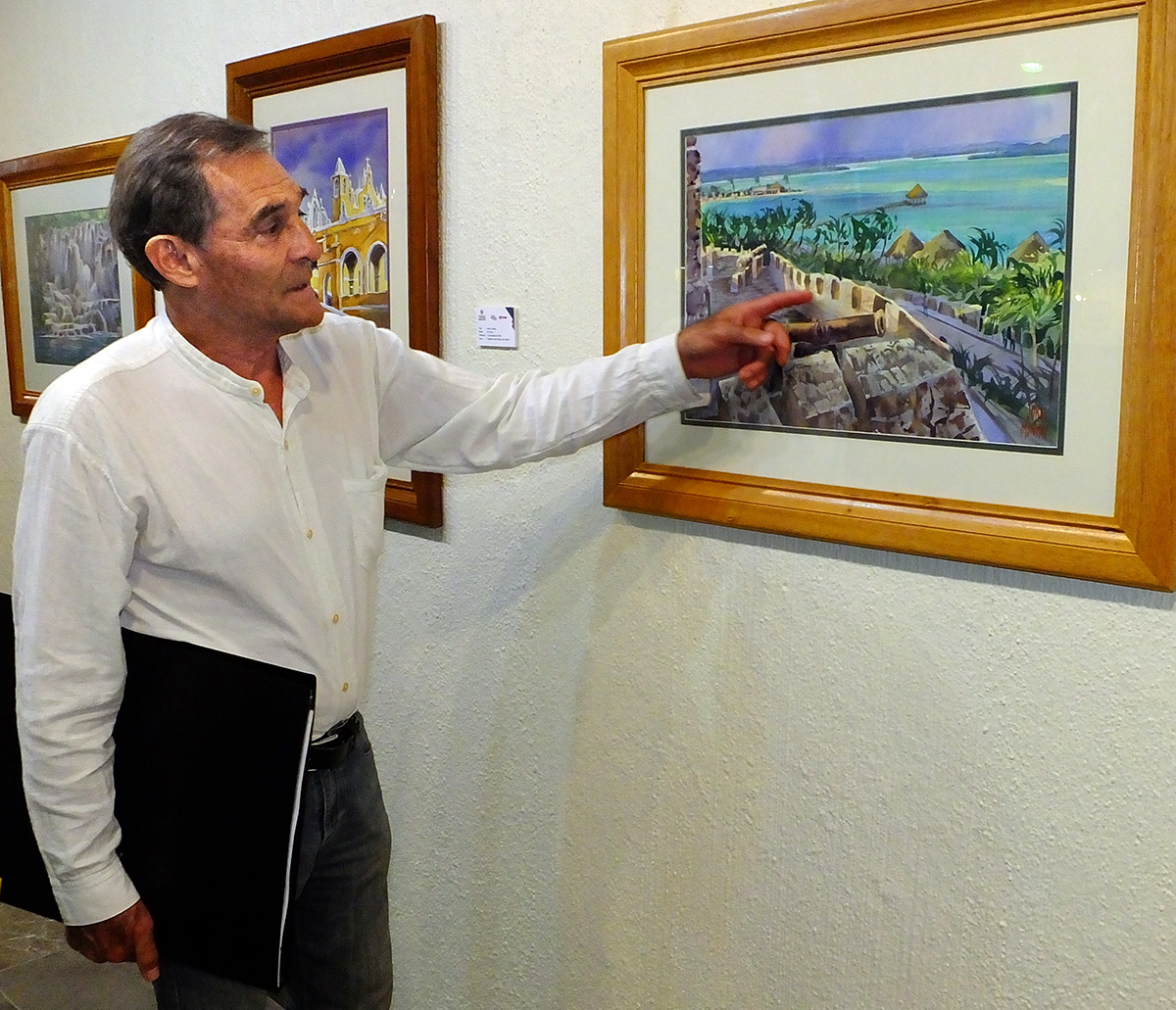 “Over some 20 years I have done more than a thousand paintings for the newspaper El Informador, without ever repeating myself,” Monroy told me. “All are now in the collection of the Jesús Álvarez de Castillo Foundation.”

The foundation recently lent the Chamber of Commerce around 50 paintings representing Mexico’s most beautiful magical towns, including all eight in Jalisco.

Accompanying Monroy through this outstanding collection of canvases, I discovered that the painter could not only speak about every one of these sites, but also recall minute details of his visit, down to what he had eaten for lunch when he was there and where he had eaten it. When I asked him to name his ten favorite pueblos mágicos, he refused, saying “each one is different.” I suddenly realized this was the same answer I have always given to people who ask me to name my favorite cave.

Monroy, however, was able to enlighten me about towns that have more attractions to enjoy other than quaint streets.”

Huasca de Ocampo in the state of Hidalgo, Monroy said, was the first town to be designated a pueblo mágico, back in 2001. Not only is the town itself beautiful, but it is surrounded by spectacular historical and natural attractions. In colonial times it was important for its mines and, in fact, mining still goes on there today. Great riches were generated for Spain and as a result, lavish haciendas were built. Two of the most notable are San Miguel Regla and Santa María Regla, both of which are now luxurious hotels. Then, just minutes away, you have the Basaltic Prisms, which are polygonal columns with five or six sides, ranging in height from 30 to 50 meters, among the longest in the world and much admired by Alexander von Humboldt in the early 1800s. The whole area is so extraordinary that it was recently incorporated into the Comarca Minera Geopark, a new member of the UNESCO Global Network of Geoparks. 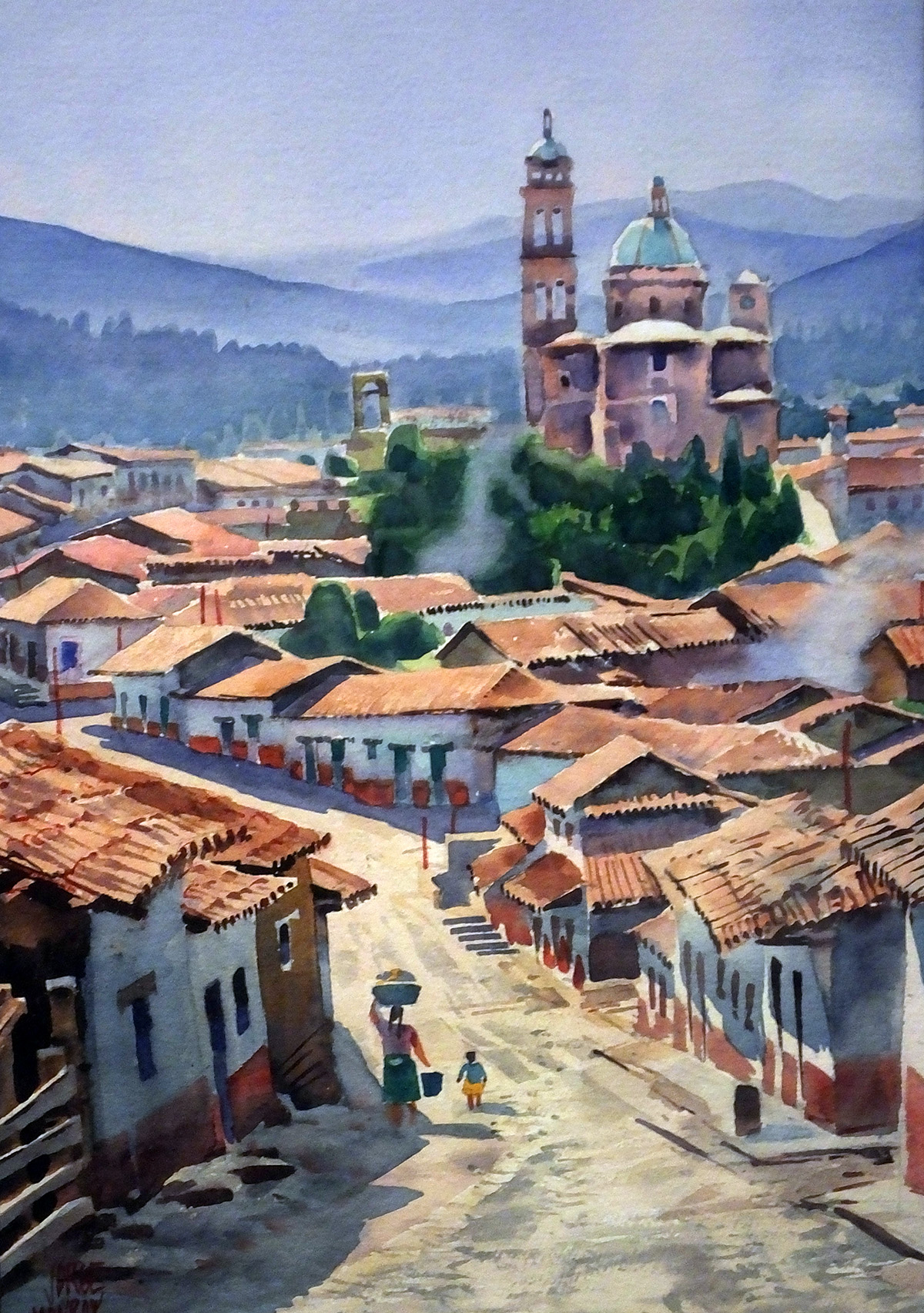 As we continued walking along the long corridor at the Cámara de Comercio, we came to Monroy’s painting of Coatepec in Veracruz. Its streets are beautiful and well-preserved, he told me, and it is located at so high an altitude that both the town and its surroundings are often shrouded in fog.

“This whole area is dedicated to coffee production and on the outskirts of the town you find fincas cafeteras, beautiful coffee plantations surrounded by exuberant vegetation” Monroy said. “Many of the local mansions have now been converted into hotels, and all around you find gorgeous waterfalls. One of the nicest in my opinion is the Cascada de Xico.” 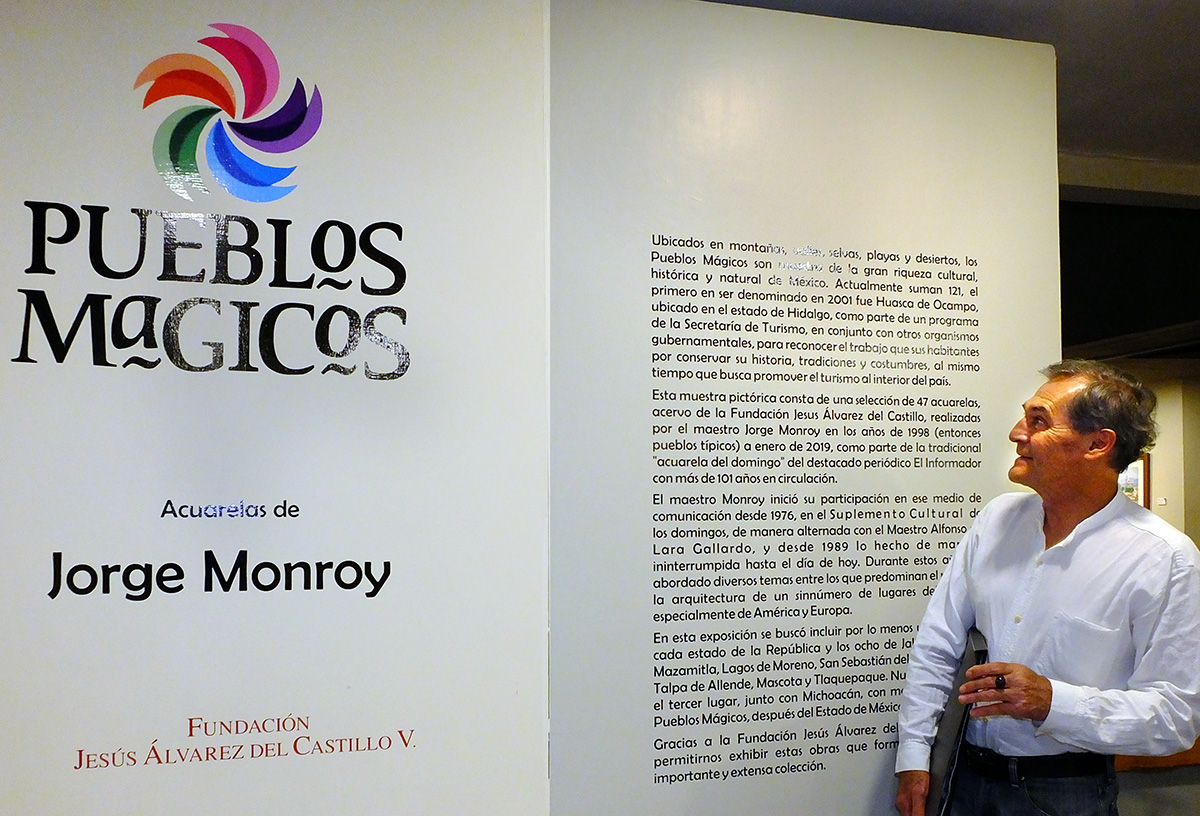 As we perused his collection of paintings, Monroy told me about many other places where the magic continues beyond the confines of the town.  “Outside Papantla you have Tajín, and there is lots to explore outside the old mining towns of Real de Catorce in San Luis Potosí, Real de Asientos in Aguascalientes and Mineral de Pozos in Guanajuato. Actually, a visit to any of Guanajuato’s many ghost towns is always an adventure.”

At the end of the Chamber of Commerce’s u-shaped art gallery we came to the last painting in the exhibition, showing the Magical Town of Bacalar in Quintana Roo. “All I can say is that this town is situated on the shore of the most beautiful lagoon in the world: la Laguna de los Siete Colores. Its beauty is simply indescribable, but I hope I have caught a little of it in my painting. Bacalar is enchanting all by itself: it was a fortress and the old cannon is still there. All around Bacalar there are amazing archaeological sites such as Kohunlich and Chetumal.

In addition, there’s the enormous Biosphere Reserve of Sian Ka’an which stretches all the way to Tulum; the dazzlingly beautiful Mahahual Beach and, just to the south, you have Belize. In fact, there are more than enough magical sites to keep even John Pint busy!

The Guadalajara Chamber of Commerce is located at Avenida Vallarta 4095 at the corner of Avenido Niño Obrero and is open weekdays 9 a.m. to 7 p.m., Saturdays 8:30 a.m. to 1 p.m.. The paintings will be on display until Wednesday, March 20 and there is no entrance fee.