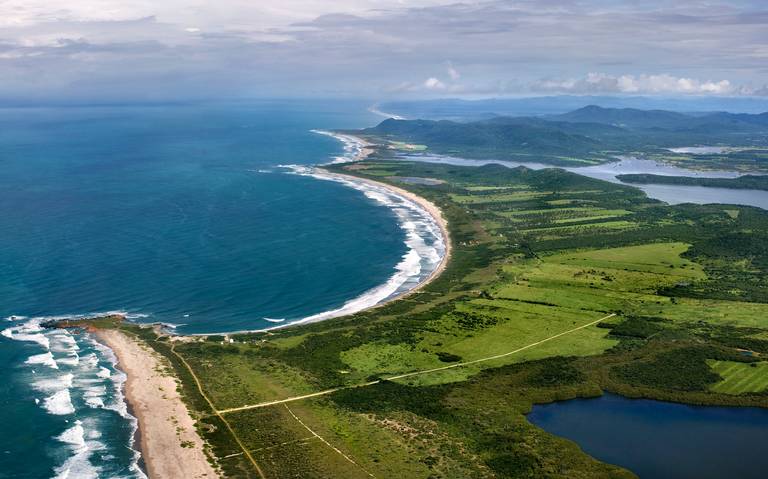 For decades, tourism development in the region, which boasts miles of unspoiled coastline, has suffered from poor planning and oversight and a history of shady developments.

One of the key points of the new master plan is a provision to create a “governing council” to oversee the development of the region.

“Our goal is to forge (consensus) between all parties in the region: politicians, local and civic groups, economists and academics,” Alfaro said this week during a visit to the area.

The governor said improving living standards for the local population and protecting the environment and natural resources will be key in the formation of the development plan for the region, which extends from Barra de Navidad in the south to Tomatlán in the north.  Costa Alegre covers 750,000 hectares of coastline in four municipalities: Tomatlán, La Huerta, Cihuatlán and Cabo Corrientes.

In general terms, the plan will consist of investing heavily in tourism and highway and hydraulic infrastructure, in addition to improving local education and health services, as well as maritime transportation.

Speaking in Chalacatepec, a pristine beach zone where a grand – and polemic – new hotel complex is planned, the governor said the plan maestro heralded a “new era” for the region.

Juan Cristóbal Bremer Villaseñor, a representative of Rasaland Investors PLC, the owners of 1,200 hectares in Chalacatepec, said his company’s project had a fundamental goal: “economic and ecological sustainability.” The development will provide plenty of new job opportunities for locals, he noted, while maintaining the environmental harmony of the zone.

Although Rasaland maintains it now has full legal ownership of the coastal land, some ejidatarios (communal famers) says they are still owed money for land they relinquished, and say they were badly shortchanged, receiving 150,000 pesos for land with a commercial value of three million pesos per hectare, one ejidatario told El Informador newspaper.

The Chalacatepec development seems in prime position to benefit from the construction of the new “Libramiento Sur,” the bypass running from the Puerto Vallarta airport through the mountains and bypassing the city, connecting with coastal Highway 200 just north of Boca de Tomatlan.  Alfaro said that once the bypass is finished, it will take just 50 minutes to drive from the Puerto Vallarta airport to Chalacatepec.

Bremer speculated that the better infrastructure would help detonate tourism throughout Costa Alegre, noting that seven out of ten passengers arriving at the Puerto Vallarta airport actually head into neighboring Nayarit. The new libramiento will be an even better incentive for tourists to experience attractions to southern Jalisco, he noted.

Alfaro also said the small airport under construction at Chalacatepec is basically finished and just waiting for approval to start operation from federal aviation authorities.   Only private planes will be permitted to land at the airstrip.

In related developments, esidents of the beach community of Tenacatita approached Alfaro during last week’s visit to the region, pleading for him to intervene in the decades-long dispute that has affected their lives.  The residents saw their livelihoods decimated when a private developer who claims ownership of the land adjoining the popular Tenacatita beach flattened their palapa seafood restaurants and barred them from the zone, in a move seen by many as illegal. However, previous state governments have tended to side with the developer, and have tried to maintain their distance from the dispute, which languishes in the civil courts.  The affected beachside residents asked Alfaro to do the decent thing, support their cause and allow them to return to their former businesses.