Lake Chapala residents had hoped to land the Olympics yacht races. They didn’t get them. The bid to host these games went to Acapulco. But the Olympics Organizing Committee was quick to recognize Ed Anderson, of Chula Vista, as the outstanding American yachtsman now living in Mexico and named “Mr. Sailboat” as an official of the races, which ran from October 14 to 21.  The naming of Anderson was a signal honor, not only to him, but to the Chapala Yacht Club, of which he is one of only a handful of U.S. members. “It is a real honor to serve,” he says. “In the U.S., I would never have been named, because there are so many sailboat men there.”

The selection of Acapulco was inevitable. It has more hotel and other housing facilities. Lake Chapala also needs a protected harbor. When storms kick up, there should be a breakwater, to prevent craft from slipping their moorings. Acapulco also has a crane to hoist big boats out of the water. And Lake Chapala is quite shallow. Its deepest point – between Alacran Island and Tuscueca on the south shore – is only about 35 feet. Offshore of Ajijic the lake is about 29 feet deep. Its shallowest point is between San Nicolas and San Pedro, where it is about 15 feet.

But Anderson points out that Chapala’s waters are ideal for certain classes of sailboats, such as the Finn, Flying Dutchman and 5.05, all of which can be towed by car.

As an official of the races, Anderson checks all competing boats in the Flying Dutchman class, one of five types of boats to be raced, to make sure they conform with all Olympic rules as to weight, size, contour, overall design and equipment.

He predicts the United States will take all the medals due to the sheer weight of numbers. There isn’t a state in the union – including Nevada – where there isn’t at least one yacht club.

Flat tires bringGDL to its knees

The students finally struck last week, when after a decent interval had lapsed following their peaceful protest against the increase in bus fares, they underlined their point by paralyzing Guadalajara’s bus transportation system, causing thousands to be stranded downtown and, in fact, in almost every section of the city and environs.

The method of attack was to let the air out of the bus tires, and in some cases to damage the tires. Since some buses were deflated in midstream, traffic tie-ups added to the general confusion and taxis were man’s best friend for a few shining hours.

Authorities reported that some 200 buses were immobilized but the bus companies reported over 1,000. The fact that many bus drivers opted to sit this one out, once aware that the students were on the rampage, may  account for the difference in arithmetic. During the height of the disturbance 50 tow trucks were used to pull disabled buses out of the way.

Although Raul Padilla Lopez, president of the Students Federation of Guadalajara (FEG), had previously called on students to maintain order, the tire deflators claimed to be secundaria and preparatoria students acting on order of the FEG.  The protest was against the new two-peso rate and the bus drivers who humiliate students who insist on their 50-percent discount.

Police arrested 156 students who were caught in the act, but later released them into custody of their parents on orders from Governor Flavio Romero de Velasco.

The legal speed limit on the Guadalajara-Puerto Vallarta highway, which passes through Ameca and Antenguillo and heads for Mascota, is 70 kilometers per hour. No one drives that fast because after Antenguillo, the road disappears under rocks, soil and weeds, then vaguely reappears in places that seem covered by pasture land. This is the highway planned ten years ago to link Guadalajara with Jalisco’s leading Pacific resort, but never completed. Beyond Ameca, it cannot properly be called a highway, say adventurous motorists who tried the trail, for in many spots the road surface no longer exists. The highway had been envisioned as a tourist link to the port city as well as an important factor in stimulating the economy of this extensive region west of Guadalajara. Today, not only is road construction stalled, but completed portions are so badly deteriorated and lacking maintenance, that much of it would have to be rebuilt if ever there is another surge of official energy to finish the job. 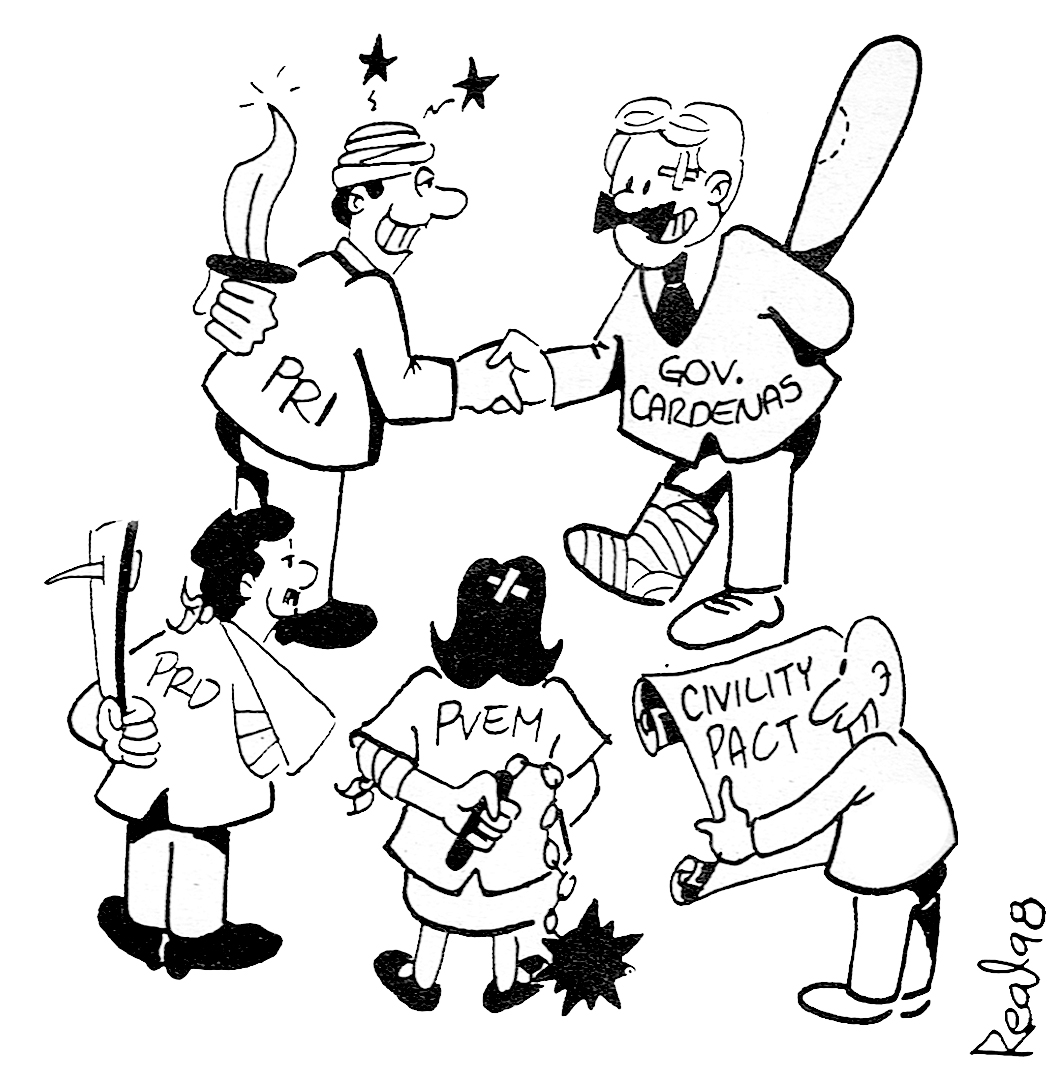 Jalisco Governor Alberto Cardenas and representatives of the state Congress patched up their differences this month, inking a “civility” agreement aimed at creating a more tolerant working relationship and pushing forward urgent business in the state legislature.

Relations between Cardenas of the Partido Accion Nacional (PAN) and the opposition representatives has deteriorated since February’s close election left no single party with an overall majority. Many initiatives, including a major plan to finance hydraulic projects, have log-jammed as bitter recriminations flew back and forth between the governor and opposition legislators. The civility pact aims to create an atmosphere of “maturity” between the two powers, putting “the interests of Jalisco above personal or party interests.”

Representatives from the four parties in the legislature, as well as the governor, agreed that the pact does not mean criticism of each others’ job performance is now taboo. The order of the day, according to the pact, will be to “avoid the use of force as a solution to controversies and advance the art of persuasion and the exercise of democracy as an instrument of solving conflicts.”

The motivating factor behind the pact has been the fierce public criticism of the attitude of the executive and legislative branches in the past eight months. Recently Roman Catholic Cardinal Juan Sandoval Iñiguez coyly suggested that the state deputies be paid on a productivity basis rather than on a fixed salary. They would earn very little, he noted.

Celebrating Halloween may be a strange and suspicious idea for many Mexicans. But the American School of Guadalajara has found a way to peacefully reconcile the quintessentially American holiday with its distant Mexican relative, Dia de los Muertos. Here, the two traditions have been celebrated side by side for decades.

“Educating students in a bilingual, bicultural and secular environment is part of our mission statement,” explains Janet Heinze, the school’s general director. “That does not mean that we don’t have values. We celebrate universal values and respect for all religions. So we have always celebrated both events together as cultural traditions, not as religious holidays. For our school, Halloween and Day of the Dead have become a symbol of the time we spend together as a community.”

Best of all for teachers, both holidays have something to teach. “Children love the magic of Halloween – dressing up and pretending to be what they are not,” said Heinze. “There are no prizes: its an event celebrating creativity. Meanwhile Dia de los Muertos is about respect for the past and about remembrance. Rituals and traditions are what keeps a society healthy. We need to treasure, respect and repeat all traditions that keep a sense of community alive.”