Guadalajara Mayor Eduardo Avina Batiz announced this week that the city has begun work on a municipal funeral parlor in the Sector Libertad. All funerals will be free to the poor. The 450,000-peso building will have four chapels, waiting rooms, office and its own carpentry shop for the manufacture of coffins. Interments will be in the municipal cemetery where a charge of 30 pesos will be made for opening and closing the grave.

The student body at the American School of Guadalajara now numbers 725, of which 62 percent are Mexicans, 34 percent from the United States and the rest from Europe and South America. According to director H.E. Holmdohl, applications next September are expected to reach 800, a number which cannot be accommodated under present conditions.

US changes negative image of Mexico

After months of often alarmist press reports, the tide of unfavorable publicity within the United States on Mexico seems to be turning. Newsweek’s January 17 issue devotes seven pages, including 11 color photographs, to “Mexico’s Sunspots.” The Washington Post publishes an article in which the practical advantages of travel here and the Mexican government’s desire to create an accommodating climate for North American travelers are balanced against tourist-scaring reports, rumors and their causes. Meanwhile, other journals throughout the United States plan similar pieces.

The Bank of Mexico has put a new ten-centavo coin in circulation, marking the gradual withdrawal of the one- and five-centavo pieces. The mint has a backlog of 20 million of the coins ready for market. The coins weigh one and one-half grams and are 15 millimeters in diameter. They contain 25 percent nickel and 75 percent copper.

Striking members of the Guadalajara Symphony Orchestra went back to work this week after Jalisco state government officials assured the musicians of a pay increase commensurate with salaries earned by Mexico City’s National Symphony Orchestra.

“I can see your face! I can see the mountains! I can SEE!” said the little boy as he jumped up and down and cried with joy. Such were the exclamations of over 3,000 underprivileged Lakeside residents who were fitted with glasses for the first time in their lives.  The recently completed sixth annual Mexican eyeglass clinic conducted in Jocotepec and Zacualco de Torres sponsored by the Canadian Foundation of World Development with the help of local volunteers provided visual aid or treatment to more than 4,500 people in two weeks.  Last November, a series of federal red-tape obstacles threatened to wreck the free eyeglass program when customs barriers were raised on the 10,000 due to arrive from Canada. After a month of negotiations with federal and state customs and tax official, this year’s program organizer, Benjamin Mora, helped clear the hurdles and the glasses arrived by courtesy of American Airlines, Mexicana and the Aduana.

Citizens from all along Lake Chapala’s extensive shoreline united for a peaceful protest in Guadalajara with the aim of drawing the attention of state officials to the complex ecological issues that effect Mexico’s largest lake. Nearly 600 fishermen, boatsmen, students, teachers, housewives, professional, merchants, farmers and businesspeople were among those who marched from Parque Agua Azul to the Plaza de Armas. At the front of the march four students, their faces hidden under peaked black hoods, bore on their shoulders a typical fishing launch. Behind the funeral cortege came marchers carrying placards bearing slogans such as “If the lake dies, Guadalajara dies.” Said march spokesman Javier Raygoza: “Our manifestation was for the state government to feel support from the citizenry to negotiate with the federal government.” 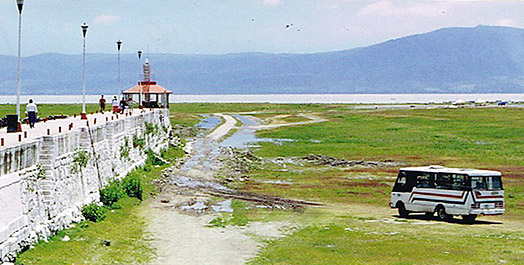 It’s cyclical stupid!  In February 1997, lakeside residents were up in arms at the lack of water in Lake Chapala.  They even marched in Guadalajara to draw attention to its plight. So distant was the water line from the shore that buses were needed to ferry visitors to the tour boats. What a difference two decades makes (photo below). 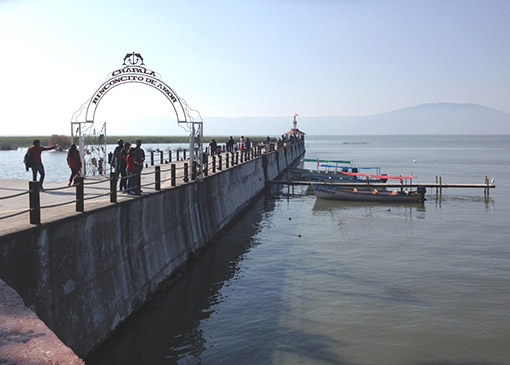 City bus riders took the law into their own hands when a 25-year old thief boarded a minibus on a major Guadalajara avenue and began to dispossess passengers of their belongings. The end result: one strangled thief and a stunned city.  Law enforcement authorities say witnesses aboard the bus have testified that the two male passengers responsible for the killing were only trying to restrain the thief. However, the two men fled the scene and their identities and whereabouts are unknown. Said Human Rights Commission spokesman Alfredo Martinez: “It’s a reflection of general public insecurity. People fear that it will be a waste of time detaining a criminal. They believe the criminals will get out of jail and then they will have to worry about reprisals later.”

Cardinal Juan Sandoval, Guadalajara’s polemic archbishop, has again angered civil libertarians, this time saying the Jalisco Human Rights Commission should “disappear.” Sandoval is upset that the rights commission is investigating alleged abuses at a Catholic-run shelter in Guadalajara for people with AIDS. “They should investigate the commission. It is a useless institution that just persecutes good people,” he said.

Just months after being forced from his home across from the U.S. Consulate General, dog lover Lawrence Gerard is again battling neighbors and Guadalajara City Hall. Gerard, along with 60 some stray dogs he cares for, vacated his Calle Libertad house in October last year, just days before city health officials acted on a court order to seize the animals. He then rented a new house in Guadalajara, but omitted to tell his landlord about the dogs. Gerard, a former priest from Philadelphia, with 20 years living in Mexico, says he is bracing for another legal battle but expects to do better this time since he has hired a new legal team.