The men of the Mexico Chapter of the Paralyzed Veterans of America (PVA) are not content to just sit around. Rather, the 100 or so members, all of whom have suffered injuries or diseases of the spinal cord, have done what almost every other group in Guadalajara said they would do first — they bought a clubhouse.

After three years of planning, the PVA purchased a fully accessible building with six rooms and two baths in the Ciudad Granja. The clubhouse is situated on over one-half acre of land with rooms utilized for offices, storage space and a gamer area. There will also be an exceptionally large room suitable for meetings and bingo. The group intends to have a ramped swimming pool.

The purchase of the clubhouse sets a precedent in Guadalajara and serves as a further bond of unity for the men on “wheels.”

The only chapter of the PVA on foreign soil, the group began to form in 1957 when a few “rebels” came to Guadalajara to “find new auras, since they had nobody and nowhere to go,” said George Ray, president of the chapter.

The men came down to investigate the warmer climate, find cheap help and perhaps to marry. According to Ray, over 90 percent are disabled veterans with 75 percent being injured while in service. After they are hurt, too many problems are created and what home life existed before, usually then fails, he said.

When the first men arrived in Guadalajara “it was almost like opening the frontier,” said Ray. Many Tapatios agree with this statement although they have said the men lived like it was the wild west. The group began to acquire a bad reputation as many people claimed that they came down for marijuana and cheap liquor.

Members of the group acknowledge that this is how things were, but also say it was because the men here had responsibilities only to themselves. But as more disabled U.S. vets came down, the commercial houses were established where they could live and receive help and in 1963 the PVA chapter was formed.

The group, which numbers upwards of 200 in the winter months, has advanced to a solvent organization with a net worth of over 30,000 pesos. The group has a service program, a special fund for anyone in financial distress and has held annual Christmas parties for more than 1,000 children.

Money for the clubhouse was raised by issuing bonds in denomination of 500 pesos. The chapter has pledged to pay ten percent interest on these bonds. 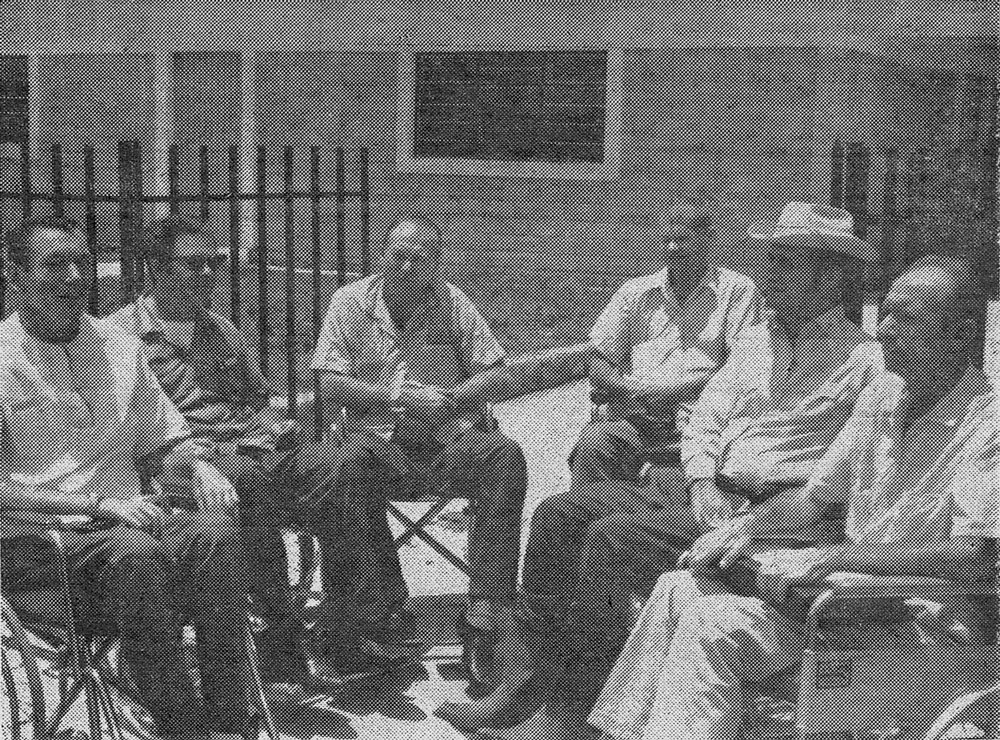 The operation of Action Radio, Guadalajara’s only English-language broadcasting station, has closed after eight years of CBS news and features and special local programs, which provided a much-needed community service. “All of us at Action Radio are deeply saddened by this turn of events,” said station manager Chuck Deare. He said the reason for the change is purely economic and aimed at improving Radio Comercial, the parent company’s financial position. Originally a 24-hour English-language broadcast, last year the station dropped its output to five hours.

Three children, aged one, three and six, have contracted AIDS from blood transfusions, according to Dr. Genaro Baiz Martinez, of the IMSS Centro Medico. The children were infected through blood that came from private blood banks. One of the children is a hemophiliac, the second needed blood after an accident and the third received the infected blood during an operation. None of the children were treated initially at the Centro Medico, but all were brought to the institution after being diagnosed.

Martinez declared that 100 percent of IMSS hospital’s blood bank is checked for AIDS. Government critics complain that IMSS is testing only one in ten liters of blood.

Woman dragged to death by rain

As a rule, rain water should flow underground into the city’s drains, but the drains here frequently back up. During a late July torrential late afternoon downpour that all but paralyzed the metro area, a drainage tube running under Avenida Americas filled, forcing water nearly a meter above the roadway. Ligia Martinez Burgos, 26, left her car on impassable Calle Montevideo in Colonia Providencia and apparently tried to cross the flowing tide of water on foot. She was dragged by the current toward the drain flowing under Americas and her body was found the following morning by firemen nearly a mile from where she had been swept away. Martinez is not the first Tapatia to have died under similar circumstances. In the 1970s two sisters were “devoured” by a sewage drain near today’s Expo Guadalajara. In 1994, a child was dragged by the current and drowned in Colonia Lomas del Paraiso. And in 1996, a woman disappeared down an open sewer near the Jalisco Stadium. Firemen searched for her, without success, for nearly a month.

Hastily moving forward with an ambitious urban regeneration project, Guadalajara Mayor Alfonso Petersen this week offered to buy homes and businesses adjacent to the city center’s Morelos Park for three times their market value. The tempting offer to property owners was Guadalajara City Hall’s final gambit in its plan to build the athletes’ village for the 2011 PAN American Games in a rundown part of downtown.

Petersen’s pet project could fall apart if just one of the 36 property owners refuses to sell. The home and business owners will receive three times the value of their properties if they sell them to city hall outright, and double their value if they accept an apartment or business space in the new complex, which will comprise eight, seven-story apartment blocks. Tenants will receive 50,000 pesos if their landlords sell the properties they are living in. The city will either relocate or compensate financially businesses during the construction process.

A handful of residents of the zone vowed not to sell or relocate regardless of the amount of money offered them. Petersen was given just three months to convince the residents to sell or find another site for the village by the Pan American Games committee.

Editor’s note: Petersen’s downtown project did indeed fall apart and the athletes’ village was eventually built – in haste – in 2010 on the fringes of the Primavera Forest, near the Omnlife Stadium.  The costly complex has since been plagued by legal issues and has been abandoned ever since the Pan Am Games ended in October 2011.