Just five years after being battered and bruised by Hurricane Jova, our pueblo was once again assaulted by Mother Nature.  Hurricane Patricia bore down on La Manzanilla with a speed and ferocity unlike anything that even the oldest residents in the town had ever experienced.

I, like so many snowbirds still stuck north of the border, could only wait helplessly, and pray for the safety of our friends.  Thanks to marvels of cell phones, pictures and videos slowly creeped out on Saturday morning. My heart ached when I saw the devastation.  The streets were filled with downed trees, tangled electric and telephone wires, all manner of debris, from broken glass to trailers flipped on their sides. Two of the beach front restaurants, Yolanda’s and Quinta Valentina’s, were gone, just gone, wiped from the face of the earth, as if they had never existed.  Homes left with no roofs, their contents destroyed. How would the people of La Manzanilla ever heal from this, I wondered. 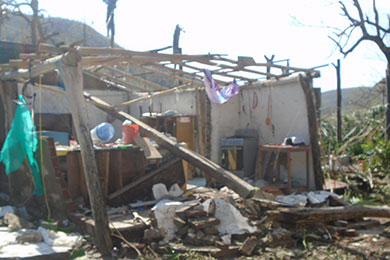 My question was answered the very next day, as once again folk came together as one.  Armed with machetes and saws, residents worked together on the daunting task of clearing the streets and homes. Pay loaders and back hoes rolled in as well to help. On Sunday, the CFE flatbed trucks rolled into town, loaded with generators, providing temporary electricity, while employees worked to restore it permanently.  The Mexican Navy and Army sent personnel to help wherever and how ever they could. The mayor of La Huerta, accompanied by the governor of Jalisco’s wife, came to town to assess the damage, and hopefully there will be some pesos coming from the government to aid those now homeless.

I was fortunate to get a phone call through to some friends yesterday. They told me even though everyone in the town is experiencing loss, there is still an air of gratefulness throughout the town.  No lives were lost, or serious injuries occurred, and as one resident stated, “we are still here, and we will flourish once again.”

Each year during the months of March and April, a “tropical depression” hovers over our village.  Not in meteorological conditions, but in the minds of the majority of the gringo community.  Winter friends begin to pack their bags and close their houses.  Amid many hugs, tequilas, and yes, even a few tears, they bid a sad adios to La Manzanilla.  All the while, assuring the hardy “year-rounders’’ left behind, that they will return in the fall.  And so they shall … but in the meantime, summer in La Manzanilla may be a little on the quiet side, but it is never dull.

The first ever, Miss Tiangues Hideous Bathing Suit Pageant was held this summer at the home of a long- time resident. Distinguished judges for this event included a resident artist and the owner of a popular restaurant in Melaque. Both contestants and judges attended in full hideous attire. Contestants were judged on overall appearance, originality of their bikini, poise, confidence and also talent. A lot of thought, creative design and wine went into both the bikinis and the performances. Each contestant sang and danced to music of their choice.  One hideous beauty rocked the stage with her rendition of Hungry Eyes, clearly becoming an instant favorite of the judges. In the end, however, the judges were unable to choose a winner, everyone was just too good! It was decided that the contestants’ names be tossed in a hat, and a winner was drawn at random.

Starting in November, live music will once again be heard around the town. Palapa Joe’s will kick off the season with the soft, sultry love songs on Wednesday nights, with La Manz’s own troubadour, Scottie Turner. More music there on Friday nights as well.  Starting at 8 p.m., our Lounge Lizards, Willy Mason on guitar and “Harmonica Man” Dan Crosby, who also has some great vocals, crank out the Rhythm & Blues. They can and do pack the house. Also returning to Palapa Joe’s as the season progresses will be Mustang Sally & Dave, The Slam Dogs, and the ever popular Open Mic Nights.

It has also been reported the “Elvis” will once again be preforming at Los Cabañas restaurant this winter.

Pedro’s by the Sea, and Martin’s restaurant will also be having live entertainment during the season as well. Dates, times for these upcoming events will be published as soon as possible.

So when you pack to visit La Manzanilla, don’t forget your dancing shoes.

It has become an unofficial tradition for Galeria La Manzanilla to kick start its Meet the Artist receptions with honorary resident and artist, Efren Gonzalez. Though born and residing in Ajijic, Gonzalez’s talent and whimsical charm has endeared him to La Manzanilla’s residents and visitors alike. This marks the 13th year that he has showcased his talent here at our Galeria. His bold use of color, and signature technique make his paintings a joy to view and to own. He is also a master of the art of meet and greet, instantly putting even the most un-art-knowledgeable person, like myself, at ease.  Ready and willing to answer any question, Gonzalez’s passion for art, of any and all kind, resonates through his words. He will deny that it is all talent, and stresses that practice, practice, practice has always been his mantra. While this may be true, in Gonzalez’s case, it is a labor of love and it shows.

Gallery owner Abigale has said the hurricane will delay her planned opening until about November 15.

The showcasing of Gonzalez’s latest works will be held on Friday, December 4, from 4 to 7 p.m.

He always packs the house, so come to the reception early. Galeria La Manzanilla is located on Calle Perula 83, a block and a half behind Palapa Joe’s Restaurant. Visit artinmexico.com for hours and upcoming events.

- Baseball games, ongoing each week, and at least one between the Division Players and the Olde Phartes.

- Night Under The Stars … and more!

Dates and information published as soon as available.