The organizers of the annual Bucerias Children’s Christmas toy distribution are sending out a big thank you to everyone who came out to support the program.

The fundraising event raised 108,000 pesos, which will allow this program to keep running strong again next season. 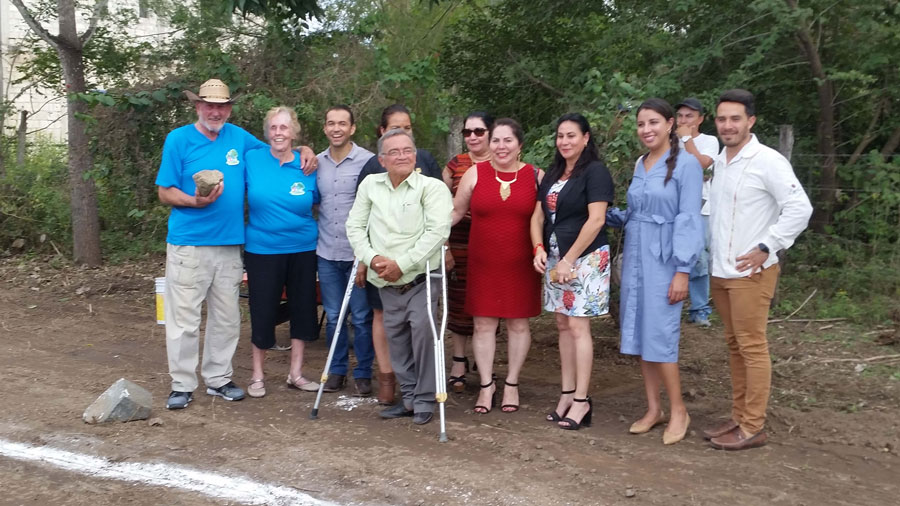 Group member Gwen Leather-Baer thanks all of the businesses that donated raffle prizes and all the volunteers who made the fundraiser run smoothly.

“A huge thank you to Glenn and Tanya, the owners of the Drunken Duck. You guys are fantastic. Your staff was amazing as always,” she said.

The finals of the 5th Riviera Nayarit Jump Circuit take place December 14 and 15 at La Patrona Polo & Equestrian Club in San Pancho.  This event seeks to encourage equestrian activities in the region. It began in March, with the first of five stages that continued through April, May and November.

The 13th Sinergiarte Collective Cultural Festival festival takes place in San Pancho from December 26-30, offering exhibitions and workshops for dance, theater, music, literature, performance art, photography, video, multimedia, painting, sculpture, martial arts, sports and other disciplines. The Sinergiarte Festival was created 13 years ago as a way to showcase and share the different kinds of art and culture created in San Pancho, hailed for its united, participatory and responsible community.

Bucerias residents Marilyn and Jim Moxin have been toiling since 2013 to improve the quality of life for the senior citizens in the Northshore area.

Starting out working with Abuelos de Bucerias, they soon saw that there were many more seniors who required extra help.

“In the fall of 2014, we formed our own non-profit, Asociacion Civil Bucerias Tercer Edad, and began the lengthy task of raising funds to build a care home, primarily for low-income Mexican senior citizens.” 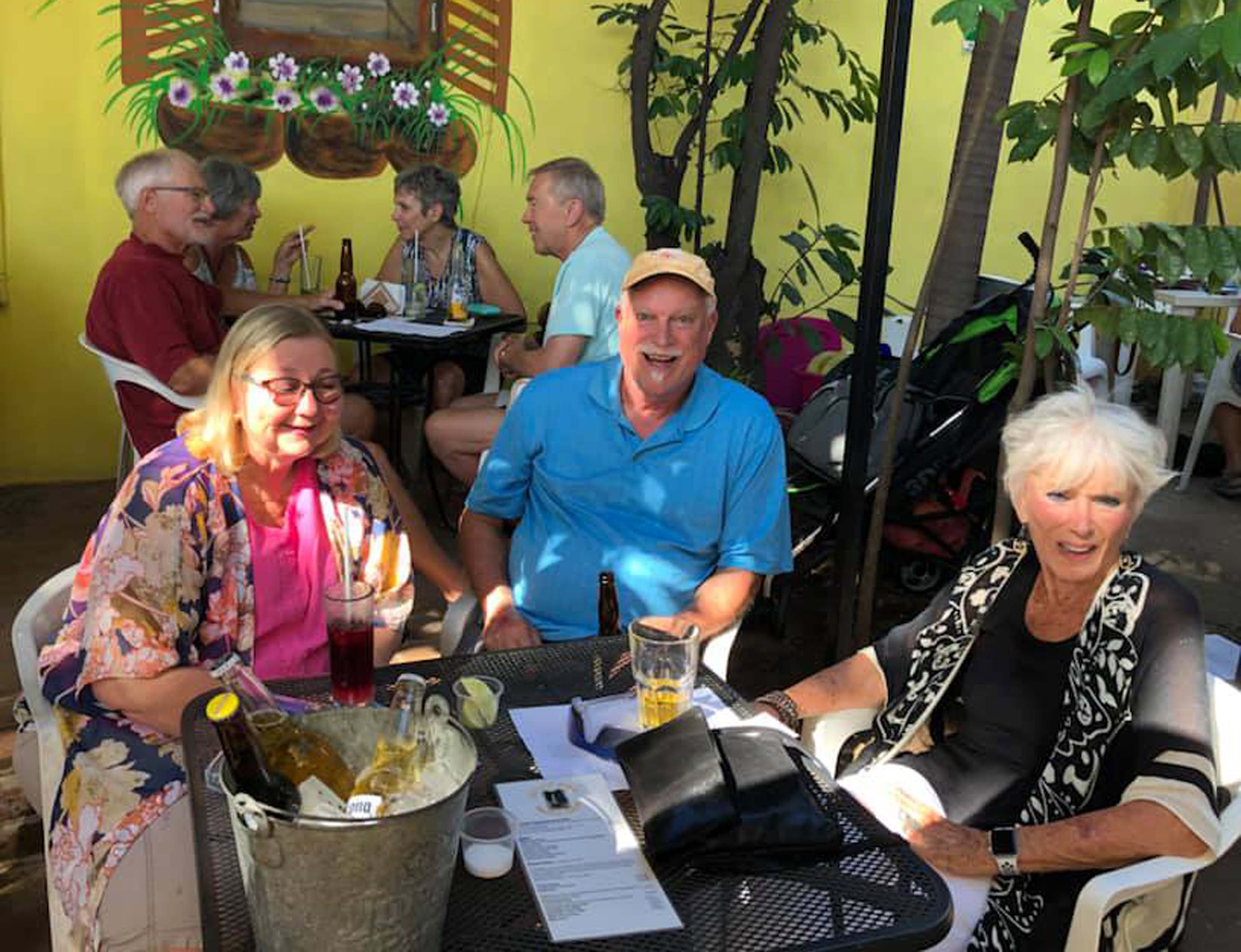 The Moxins dedicated their time to raising the 3.5 million pesos needed to build such a facility. So far, they have raised 1.2 million pesos, meaning much more fundraising is required.

The couple sold items at the La Cruz and Bucerias high season markets and held many fundraising events, as well as approaching foundations and corporations in Canada, the United States and Mexico for grants and donations to the cause.

Along the journey, they met many senior citizens who needed more immediate quality-of-life assistance.

In addition to the senior home construction project, they distributed wheelchairs, walkers, crutches, canes, clothing and bedding, which they accrued from generous donors.

No matter how good the intention, construction projects in Mexico are not easy to finalize. Permit delays and a surveying error on land leased from a local non-profit group provided some obstacles to accomplishing the goal.

The ground-breaking (rock placing) ceremony took place December 7, on the chalk outline in the dirt location of the home.

The home will consist of 17 double occupancy rooms with an attached bathroom.

There will be a dining and recreation wing, which will include a kitchen, laundry and storage space/bodega.

A courtyard will provide a relaxation space and rows of waist-high garden areas to grow vegetables and allow for hobby gardeners.

Included in the thank yous list was the College of Architects and Engineers, Los Arroyos Verdes owner Guadalupe Dipp, builders/developers Carlos and Jorge Grimaldi, Jose Luis Cervantes, the head of the handicap group, the many volunteers who produced and sold the fundraising items and the many donors over the years.

After a six-year hiatus, organizers of the Bucerias Art Walk are bringing the International Bucerias Street Festival back to life.

The festival, which last took place in 2013 after a four-year consecutive run, is set for Tuesday, Wednesday and Thursday, February 5, 6 and 7.

The festival will welcome more than 15 chalk artists from all over the world, including Denmark, Los Angeles, San Francisco, Durango and Guadalajara, as well as some homegrown artists from Puerto Vallarta and neighboring Mezcales.

The chalk artists will produce their drawings starting on Tuesday, between Galeana and Benito Juarez, for the festival’s three-day run.

Also slated, for the first time, on Tuesday, is the Bucerias Business Day, when area businesses will display their products and services.

Back by popular demand, on Wednesday, is the Taste of Bucerias. This will allow festivalgoers to taste signature dishes from restaurants around the bay.

Finally, the Bucerias Block Party, on Thursday, will feature music, dance and art.

For 2,500 pesos, you can purchase chalk, pay for a stipend and help with travel costs. All the money goes directly to the artist.

Read upcoming columns for more information about the Chalk Artwalk, Bucerias Business Days and the Taste of Bucerias.  The event will benefit Paws ‘n Claws Spay and Neuter Clinics, as well as the San Pancho Battered Women’s Shelter.

About one month ago, Lee Witkin asked her Facebook friends on for ideas on how to make some money. She received lots of great ideas and liked one in particular.

She says: “Throughout my life, I’ve had many passions, but creating delicious gourmet food for others to enjoy was paramount.  I owned a restaurant in New Orleans for many years, but retired when my kids were young and moved to Colorado.

“My husband Norm and I lived in the Colorado Rockies at 8,000 feet (2,500 meters), which meant cold and snowy winters which, as we aged, meant increased health issues.  In 2017, we made the bold and adventurous decision to move from Colorado to beautiful and warm Riviera Nayarit.”

Based on the feedback, she immediately went out and bought a freezer and has obtained eco-friendly, biodegradable containers, to start making and selling soups and stews “to the folks down here who are missing a taste of home.”

She says: “All of my offerings are made with the highest quality, freshest ingredients available, including the most important ingredient, love.

Witkin says that with the encouragement and support of local artists, and her husband, she has started painting again – in particular, abstract painting in acrylic on canvas and canvas boards.

Witkin held a food tasting December 13 at Hacienda de Arte, the gallery that is showing her artwork. She hopes to set up another soon.

The name of Witkin’s new business is the Artist’s Palate. See artistspalate.net for more details.