This summer when Maria Cristina Hall begins teaching a unique Course in Professional Spanish for Returned Persons (Curso de Español Profesional para Personas Retornadas) in Mexico City, it will mark the third year that the dual citizen and her fellow professors, Adriana Ortega and Víctor Amaro, have offered the course to Mexicans who have returned or been deported from the United States. 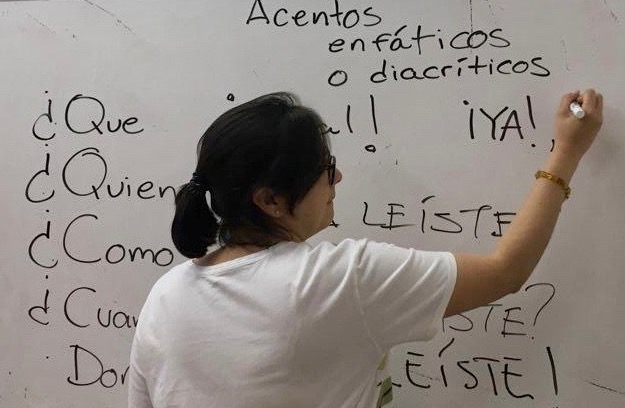 Hall, a twenty-something poet and translator who is fluent in English and Spanish (as well as Catalan), started planning the class with her colleagues as a result of two conferences she gave at the annual International Book Fair in Mexico City. Her presentations had focused on what she describes as the “American exile” and “what it’s like to be Mexican in the United States.” A young man who shared his testimony at the conference suggested that Mexicans with limited Spanish who had been deported from the United States as a result of the aggressive policies of presidents Obama and Trump, as well as children and spouses who had voluntarily returned to accompany their deported relatives, desperately needed instruction in the Spanish language in order to be more employable.

“Returned people often work in call centers, which need workers fluent in English, or in tourism at beach resorts. But to break into other professions, they need better Spanish. So this course teaches punctuation, formality, accent marks and so on. We also teach Mexican-American literature, how to write a resume or have a job interview in Spanish and the political context.

“We believe Spanglish is a legitimate language,” Hall emphasized, while pointing out that the course is given in Spanish because employers want people who can write and spell Spanish in professional contexts.

Hall said that, although a plane carrying deported people arrives at the Mexico City airport (as well as at other locations in Mexico) every Thursday—where they may be met by someone connected with her course and with activist organizations for deported people—her classes do not have a large number of students.

“We have about seven to 10 students a year,” she explained. “It’s not easy to come to the course. We used to meet three times a week, which is hard for working people. That’s why this year we’ll be offering the course only on Saturdays for four hours, and we’ll specify the subject each time.”

The classes are free to the students, she noted, although the original idea was to have the students pay in order to build commitment. When that did not work, organizers turned to crowd funding via Facebook, which was successful. Some solidarity organizations aimed at deported people, such as Otras Dreams in Accion (ODA), have also helped.

Although some people help with the classes on a volunteer basis, some are paid. “We’ve decided it’s not sustainable without funds,” explained Hall, “and this year we’re hoping that ODA may fund us.”

As an example of a student who completed the course and became active in the community of returned Mexicans, Hall mentioned 27-year-old Rossy, who used to live in Indiana, attended a public university in Mexico City after her arrival here and was unemployed. After the course, she published her writing on Words Without Borders, an online magazine, and started going to the Mexico City airport every week to assist deported people.

Another course student is Oscar, who was brought to Los Angeles when a few months old and recruited as a child into a gang known as 18th Street or the Children’s Army, which uses youngsters without criminal records as drug dealers.

“Oscar decided he wanted to stop being in gangs. He went to the Tec de Monterrey and took our course when it was offered there the first year. It gave him more of a community. Now he works at a beach hotel and we keep in touch. He’s interested in finding free legal advice for deported people.”

The idea of an unjust “American exile” still figures prominently in Hall’s view of current Mexican-American relations, formed during her study of political science at Columbia University. “Mexicans do all sorts of crucial work in the United States – construction, farming, restaurant work …” she lamented, yet are increasingly subject to aggressive deportation.

Donations to support the course may be made at paypal.me/odamexico in pesos or dollars. It is important to write “Spanish course” in the description of the donation – otherwise the funds will go toward another project.