The first time I tried to find Tanuki, open only two months, there was no visible address or sign, just a door on Calle Argentina opening into what appeared to be a small restaurant with blonde wood decor. 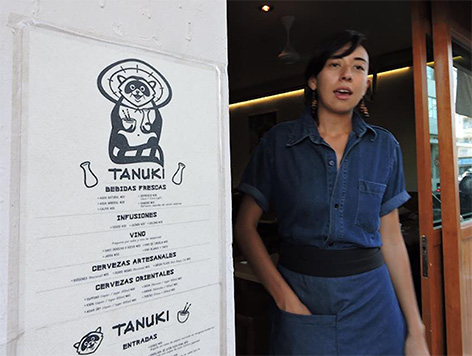 No friends inside either. The people I was to meet had suggested Tanuki, saying they’d read it was the only place in Guadalajara that serves okonomiyaki, which they got to like while living in Japan. But where were they?

They were sitting in another Japanese restaurant across the street — the locale is apparently a “little Japan” — until they figured out they were in the wrong place.

Soon after we finally settled in at 7:15 p.m. — only about an hour after Tanuki’s opening — the ten tables and ten-seat sushi bar (which doesn’t serve sushi) were packed, one with a group of happily inebriated, young Japanese men ordering from the extensive selection of Asian drinks and the rest with an in-the-know bunch of Mexicans ordering from the small menu with confidence and receiving intriguing dishes, including a winter stew (oden) that was not on the menu.

We ordered with confidence too, with cheerful assistance from the young waitress, who seemed happy to explain each dish in Spanish — not necessarily an easy task when dealing with a tableful of gringos whose Spanish ranged from good to “ma-ma” (Japanese for “más o menos”). However, her task was made easier by the small size of the menu proper: okonomiyaki and yakisoba in various configurations, plus a nice variety of appetizers and drinks.

My companions got a Hiroshima style okonomiyaki (Osaka style is the other option), which is a base of shredded cabbage, eggs, yakisoba noodles and usually pork bellies (or sirloin or seafood), all fried, a bit like a large omelette or frittata, and topped with sauces and condiments such as shaved bonito flakes and red, pickled ginger.

Okonomiyaki means “grilled whatever,” showing how adaptable it is, and Tanuki offers several varieties of it, including one with everything (“mix”). The price ranges from 130 to 180 pesos, so this is clearly not Japanese food of the startlingly expensive kind.

Since I had never gotten into okonomiyaki while living in Japan, instead I ordered yakisoba: a mound of beige noodles, a wide variety of vegetables, tuna, condiments and sauces, which is not dissimilar in appearance to okonomiyaki. It comes with a choice of pork belly, beef or shrimp (or “mix”) and costs about the same (130-198 pesos).

I was not looking forward to the plentiful use of dubious vegetable oils that I expected, so I was pleasantly surprised that my yakisoba had the distinct aroma of sesame oil. It also had a generous amount of shrimp, with everything set off by a tasty, sweetish okonomi sauce.

As an appetizer, my companions ordered edamame, steamed green soybeans in their pods. I could never get excited about edamame but my friends were happy with it and I found other appetizers I liked better, such as sweet, buttered corn served in a tiny cast-iron frying pan. I ordered kimchi with great anticipation, since I make it at home. Although what I was served was well presented (a mound of fermented cabbage topped with sesame seeds over soft tofu), the taste was not tangy, but way over-fermented. Perhaps nobody had tasted it in a while. I sent it back and was not charged.

My companions declared the okonomiyaki good, though perhaps Mexicanized, and said they would return.

I went back a few weeks later with a vegan friend and, despite the fact that there was nothing specifically vegan on the menu, the staff was accommodating. They served him a noodle dish similar to my yakisoba, but with tofu, which was a little tough. Still, we gave a thumbs-up to Tanuki, as a intimate place with good vibes and well-prepared, relatively inexpensive and authentic offerings.