When your first opportunity to eat currywurst is inside a massive, drafty suburban shopping mall in Guadalajara, Mexico, you may find yourself meditating upon the un-predictable ways the strands of our complex human universe are interwoven. Also, reflections on the au courant issue of cultural appropriation may occur, being that this dish (an already-Frankenstein-esque German street food staple created by a Berliner housewife using local sausage, ketchup, and curry powder courtesy of British soldiers) is prepared by Mexicans in the tiny kitchen of a Mexican-owned business.

Aldo Altamirano, born and raised in Mexico City, is the loom master responsible for drawing this sturdy filament of German culture over the Atlantic Ocean, across Mexico’s midriff to the pearl of Jalisco, where it snakes up two flights of stairs to the top floor of Centro Magno, a large shopping mall a few kilometers west of downtown. In his capacity as the owner of Samadhi Café - and of an enterprise importing and distributing quality goods from Europe - Altamirano avails his public of hard-to-find artisanal beers, many of which are highly esteemed by the world’s top beer sommeliers, or cicerones.

Altamirano’s interest in German culture began in 1996, when he started working as a DJ for a college radio station in Mexico City.  There, he ran a program called Ex-perimento, which mainly aired modern European music: electro-pop, New Wave and the like, much of which came from Germany. He then started funneling his increasing fascination with that music through the promotion of a regular series of concerts around Mexico City, featuring bands he and his associates and fellow teutophiles flew in from Europe. 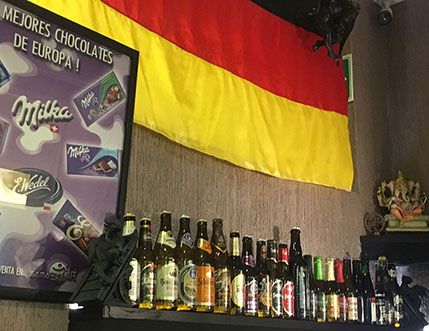 Then, in 2006, Altamirano opened the first Samadhi Cafe, a shrine to good beer and German bar food, sans lederhosen or any of the other tired, familiar trappings of Disney-fied German-themed pubs. That first location, in the Colonia Narvarte neighborhood of Mexico City, has since had to shutter due to issues with a couple of his partners. However, he assured the Reporter that all CDMX branch’s furniture and equipment is standing by for an eventual re-opening, the exact date of which has yet to be determined.

Samadhi Café’s current iteration, however, is alive and well.  In fact, Altamirano doesn’t consider an expansion within Guadalajara to be out of the question. When that may occur is, again, an open question. For now, he’s putting the horse before the cart, doing his best to challenge his small but dedicated public with a list of beers that, with a couple of exceptions, is in a state of constant flux.

Chief among those exceptions would have to be a label-less brown bottle sitting anonymously cheek-to-jowl with about 20 other brands. The only clue to its identity is written in old-fashioned lettering on its small cap. Trappist Westvleteren 12, admittedly not German (it’s brewed in the Flemish town of Vleteren by, natch, Trappist monks), is nonetheless Samadhi Café’s headliner. Named several times the best beer in the world, this dark, strong brew (10.2% abv) is highly allocated and thus quite expensive. However, through the import and distribution wing of the Samadhi company, Altamirano manages to shave a couple hundred pesos off of the retail price.

In addition to the illustrious pantheon of suds, Samadhi Café cooks up an all-organic menu of crepes both savory and sweet, bagels, and the aforementioned currywurst, the components of which are imported from Germany and elsewhere in Europe in the same scrupulous manner that governs the importation of beers.  Rounding out the menu is a large selection of teas, coffees and assorted desserts and oddities which may need some explaining here in Mexico but probably elicit delighted recognition from visiting Continentals.

To hypothetical accusations of having appropriated what some might see as another country’s cultural patrimony, Altamirano offers a passionate rebuttal which makes clear his commitment to doing right by the cuisine and beverages of the culture he’s become so closely acquainted with since 1996.

“I love my birth country deeply; I haven’t left it for that reason,” says Altamirano. “But I’ve also developed a passion for German culture.  With Samadhi Café, we’ve brought our love for German food together with its music (we almost always play tunes from Europe and Germany in the restaurant). We import seasonal specialties and offer them in alignment with the German festivals at which these foods are eaten.”

Driving his point home, he added, “I believe that a country’s culture is enriched through familiarization with the cultures of other countries, vis a vis music, art, cinema, literature, and gastronomy.”

Keep your eyes peeled for the further adventures of Aldo Altamirano and Samadhi Café on the landscape of Guadalajara’s protean restaurant and bar scene. They have two Facebook pages, one for Guadalajara and one for Mexico City. Samadhi Café is located inside shopping center Centro Magno on Avenida Vallarta 2425, Colonia Arcos Vallarta, Local F14 (second floor).