Gourmet dining has almost as much to do with how you feel when you walk into a dining establishment as it does the food and service.

It’s almost a philosophy, one that may go back to the Greeks and Romans, who felt that the environment had to add to the fare itself. This often meant a salon, which was undisturbed and service that was ever-ready. And protocol called for careful a

At Elegante, the new restaurant at Calle Constitution 59 in Ajijic, there’s an uncanny sense of confidence and efficiency among the staff; an attentive team captained by a schooled chef; the environs offer a nice choice of where and in what type of space you’d like to dine; and the owner comes to your table to welcome you. These niceties start before you reach for your napkin. The impeccable setting is stark modern with a black/white simplicity, bright spaces and cozy quarters and rooms for whatever your mood. There is nothing to distract from the fine dining and your own personal table chat. 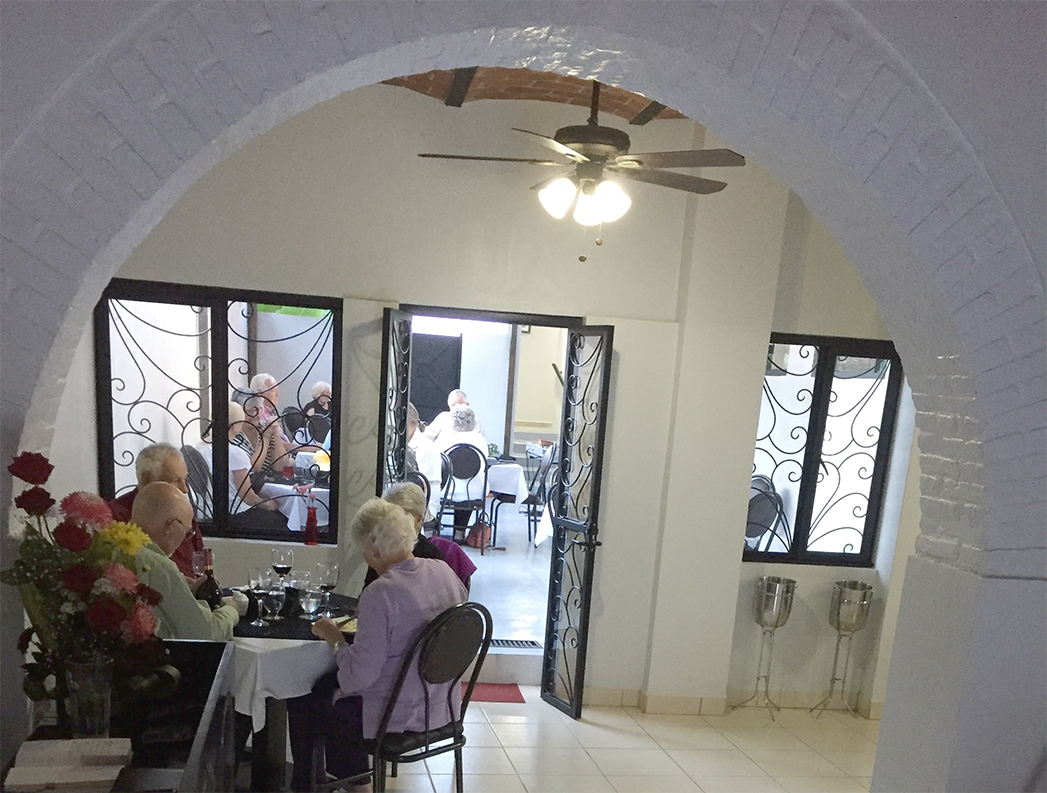 Some of the basics behind successful upscale dining is knowing your competition and fashioning a menu of discerning dishes to be able to fill a niche at Lakeside.

And after three weeks from opening, this venue is already gathering a regular crowd.

The menu had an aristocratic style, despite the fact that it was short on offerings. It was still totally qualified for just about any custom or craving with supremely prepared and dressed offerings, each with an original and delightful panache.

The appetizers couldn’t be ignored because they were among the most popular: Shrimp cocktail, baked brie with a berry compote, a delicately seared tuna with lime soy vinaigrette, grilled pineapple and fried wontons made it easy to begin.

A Black Angus filet mignon tops the menu. It’s fashioned with a demi-glace cabernet mushroom sauce, dressed with a truffle and shrimp mash. One gets the feeling it’s a specialty of the house, since I noticed it on just about every dinner table.

I also saw something I’d never had before: a blackened salmon dish. I ordered it. It came with a crusted veneer of fresh ground black pepper and other toasted Cajun herbs, covered with a buttery shrimp and herb dressing. Below the blackened top layer, the underside was still moist and rosy.

Vegans need to just ask for a robust house salad and then specify what they would like in it. My companion had a kaleidoscopic dish with tomatoes, sweet red peppers, cucumbers and strawberries over leafy greens topped with avocado and fried onion rings — made to the diner’s request — with a choice of dressings

The most crowded page on the menu featured the list of drinks, and there wasn’t much missing. The wines by the bottle were unpretentious and reasonably priced and so were the stronger spirits. The Greeks and Romans loved variety, but it was second priority to invention and creativity.  Missing from the restaurant’s elegance may have been gentle classical music to go with the other refinements.