It’s hard to get your head around the Palacio de las Vacas (Palace of the Cows), except to say it doesn’t have much to do with cows and it isn’t minimalist. 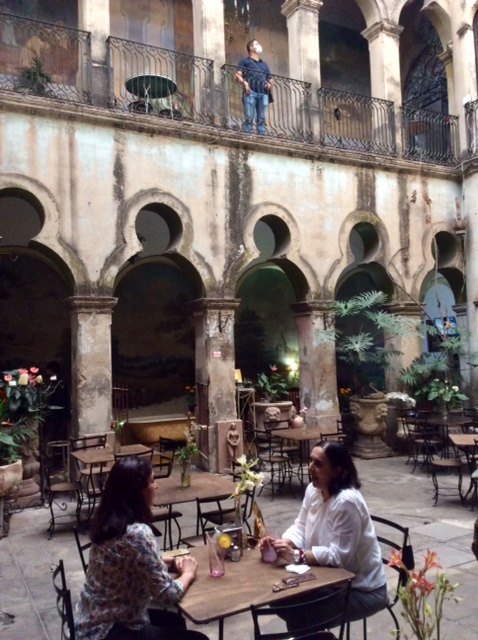 One of my first uncertainties was: Is it even open? On the narrow, downtown Guadalajara street of San Felipe, nothing obvious distinguishes the Palacio from its neighbors, unless you can stand back and get a good view, which you can’t. I passed two apparent entrances and saw their two sets of grillwork were firmly chained closed with shiny, new padlocks. My stomach was growling and hope for a much-anticipated pizza was fading.

It can’t be closed; I just read a newspaper announcement and phoned ahead. But look, there’s another entrance and it’s open!

Inside, one is almost immediately impressed by the size, opulence and well-tended seediness of the Palacio. Gurgling a few feet from the entrance is a fountain big enough for an adult alligator, surrounded by plants, pottery and classical-appearing sculptures. The area is overhung by an inscription announcing that this was a palace between 1850 and 1910, when perhaps Mexico’s longest-running president of all time, Porfirio Diaz, was in power.

The building, like others Diaz constructed around the country, showcased his love of art and all things French, which he demonstrated by constructing elaborate structures and – after a zillion dubiously engineered “elections” to office – retiring or, better said, fleeing to Paris, where he spent his final years and was interred in the Montparnasse cemetery. Besides being reviled for his tendencies toward luxury and autocracy, Diaz garnered notoriety for the construction of railways and mines, which might have been positive if they hadn’t displaced so many people and contributed mightily to the Revolution of 1910. (The word is that some historians are now attempting to resuscitate Diaz’s reputation and – who knows – he probably had some good points.)