If you read last week’s account of several days spent in Oaxaca City exposed to what a San Francisco-trained chef – Julio Aguilera of Oaxaca-cathedral-adjacent El Destilado – likes to sink his teeth into on the city’s wide spectrum of gustatory options, plus an account of his restaurant’s 12-something-course tasting menu, then you may recall where we left off. 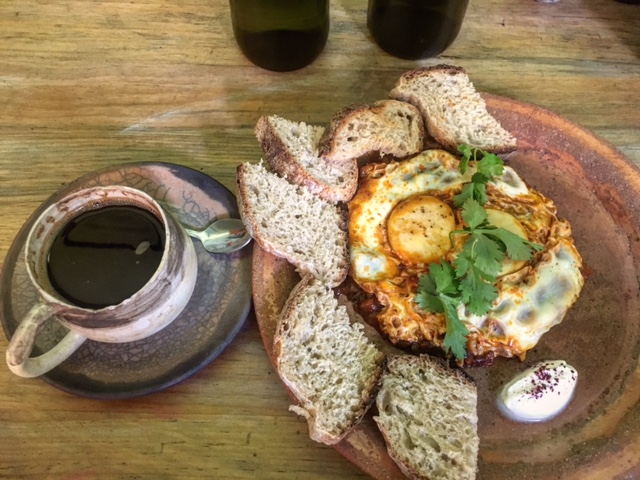 It was day two and Julio, his friend Rebecca and I ate a late breakfast at Ita Noni, an affordable local eatery of around ten years specializing in all things masa: comestibles (tamales, tetelas, memelitas, et al) and at least one drinkable (tascalate, made from anatto seed, cacao and, of course, corn).

The ponderously heavy fare – stuffed and/or topped with rich, dark chicharron maybe, or beans, definitely cheese, perhaps rajas for the perfunctory healthful option – sat in my already-abused viscera as Julio and Rebecca waved a hasty goodbye from a cab which swiftly accelerated away to the west, leaving me alone and pregnant with a rolly-polly baby of dense masa under a hot southern Mexican sun, unsure of what to do next.

Eating, naturally, was out of the question, nay suicidal, so I opted to walk in the direction of the city’s heart, located about 20 minutes to the southwest from Ita Noni’s position in the northeast Reforma neighborhood.

It’s a heart that works overtime to circulate through its metropolitan bloodstream an ever-increasing infusion of tourists from abroad and from within Mexico itself.  Everywhere are signs that expatriates and vacationing and/or seasonally transient Occidentals have long made their presence ubiquitous in this folksy city, one whose indigenous character is rapidly proving to be its fall from what may or may not have been the grace of a simpler, more “authentic” time.

A time before dog masseurs and chi-enhancers, and certainly an era before the arrival on the Oaxaca City food scene of Boulenc, a bakery-cum-restaurant which doubles as a social nexus for the city’s permanent or transient population whose purchasing power far outstrips that of the majority of Oaxaca’s locals.  It’s also where I ate a very late lunch after peeling several layers of shoe rubber off my threadbare knock-off Vans while rubber-necking the town’s rich lode of visual charms.

If the wildly diverse array of dishes printed on Boulenc’s menu had been prepared haphazardly and without the guidance of a discerning palate, I would have gladly damned the place to the hell reserved for half-baked restaurant concepts which try and spread already-meager talent over too large a slice of cultural bread.  But the shakshouka – a spicy middle-eastern egg-and-tomato dish – dispelled any concerns that Hernandez and company were investing as little time in perfecting their bill of fare as a stoned high school junior dedicates to researching a paper on, say, the Polish-Cossack War.

Did I feel a pang or two of guilt lobbed at me, perhaps, by the spirits of my deceased, extremely left-wing, gengtrification-hating grandparents? If I did, they were obliterated by the explosion of bright-orange egg yolk from my shakshouka’s perfect sunny-side-up egg over a piquant tomato sauce made with harissa and chipotle. 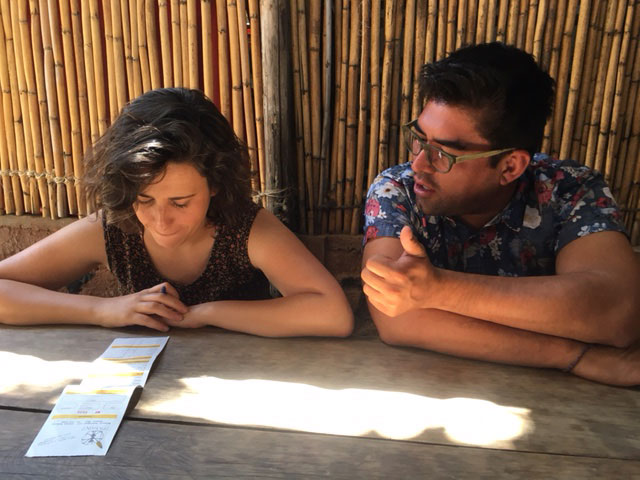 Chef Julio Aguilera had made no bones about recommending Boulenc, and why should he? He’s a chef, not a social activist. Good is good. And neither does Aguilera show hesitation in wielding his  far-ranging, capacious culinary education.

To explicate Aguilera’s polyglot approach to cooking we jump to the evening following my lunch at Boulenc, to course six of El Destilado’s tasting menu: a preparation of dorado (mahi-mahi), encrusted with dehydrated plantain skin, bits of Baja abalone and pickled mushrooms cooked in dried shellfish, luxuriating in a generous sauce-pan-full of emulsified brown butter.   The techniques and ingredients in this one dish – a small but important part of a toe-curling 12-course tasting menu – make manifest a culinary restlessness and a knack for successfully grafting together disparate flavors.  His modus operandi, then, is thoroughly in line with many chefs of his generation: Dr. Frankensteins in the kitchen whose edible monsters are the result of varying degrees of successful synergy between disparate elements sewn together and brought to life by flame, rather than a lightning bolt.

The dorado, by the way, was paired with a very light, crisp and acidic red wine, produced by a Tecate, Baja California winery called Bichi.  This tipple was part and parcel with the rest of the pairing program, which included a couple of other Baja wines, pulque and house mescal; where the food was a composite of international influences, then, the quaffable accompaniments were fiercely, proudly Mexican.

Pride in the local wasn’t missing in the food at Origen, a restaurant just half a block from the buzzing Zocalo where I ate on Aguilera’s recommendation at 9 p.m. the previous evening, having finally processed and, ahem, eliminated my corn-heavy repast at Ita Noni and the more modest one at bakery/restaurant Boulenc. 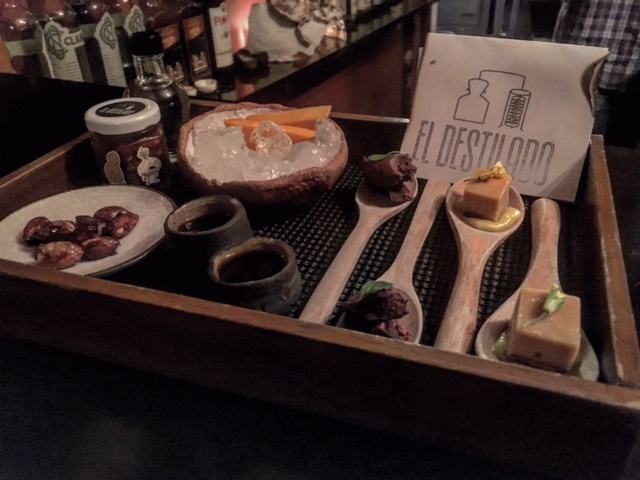 Aguilera’s recommendation made sense. Like him, Origen chef Rodolfo Castellano spent time at prestigious kitchens in San Francisco, including Peruvian superstar chef Gaston Acurio’s branch of his worldwide La Mar chain, and Jardiniere, a French-centric legend on the fog-wreathed city’s fine-dining scene.  He also cooked at the French Embassy in Mexico City, where he presumably honed his Continental chops on the fine edge of many a French diplomat’s fussy, unforgiving and dismissive palate.

Origen’s food, an unapologetic amalgam of flavors and techniques from Mexico, the United States, Europe and Asia, didn’t disappoint, but one dish left me almost slack-jawed with pleasure: a bowl of honey-comb tripe, oh-so-slowly cooked to oozingly tender, sensual perfection in salsa chintextle.

While the sweet bread tostada with black beans and purslane and pig’s foot terrine which rounded out my meal at Origen were hardly sub-rate, they quickly bowed before the tripe, this humble-seeming, homely-looking dish of stomach lining transformed by the magic of slow, patient braising in a staple of Oaxaca’s gastronomy, a paste made from, among other things, dried shrimp, dried avocado leaves, garlic and pumpkin seeds. Chintextle, incidentally, was also used to glaze the succulent, toothsome sweet breads presented during course three of Aguilera’s tasting menu at El Destilado the following evening.  It’s not a sauce that, as far as I can tell, has reached the ear of your average foodie dilettante the way huitlacoche has, but perhaps that is due to change soon.

There’s a lot of fuss made in some quarters of the massive culinary edifice of Oaxaca’s culinary establishment about preserving tradition, and the danger that foreign-trained chefs such as Aguilera and Castellano pose to the old food ways.  But these concerns seem a tad hysterical if you take a closer look at what goes into these chefs’ respective cuisines.

Not to mention to actually sit down and try their food. One thing those who spend an inordinate amount of time raising a hue and cry over a supposed threat to tradition and/or morality have in common is a propensity to judge that which they fear without actively engaging with it.  Having tasted in five days of belly-bloating excess a wide range of what Oaxaca has to offer, guided by the sure hand of an open-minded and discerning culinary professional trained in a cosmopolitan Californian city with almost every food imaginable at its fingertips, I see no reason why “high” and “low” can’t coexist peaceably in one of Mexico’s culinary meccas.