When I told a family friend I was moving to Mexico their eyes lit up and they exclaimed, “You have to go to Merida!” Since coming to this country, whenever I’ve brought up this city it’s been met with enthusiastic comments about the beauty, food and surrounding nature. 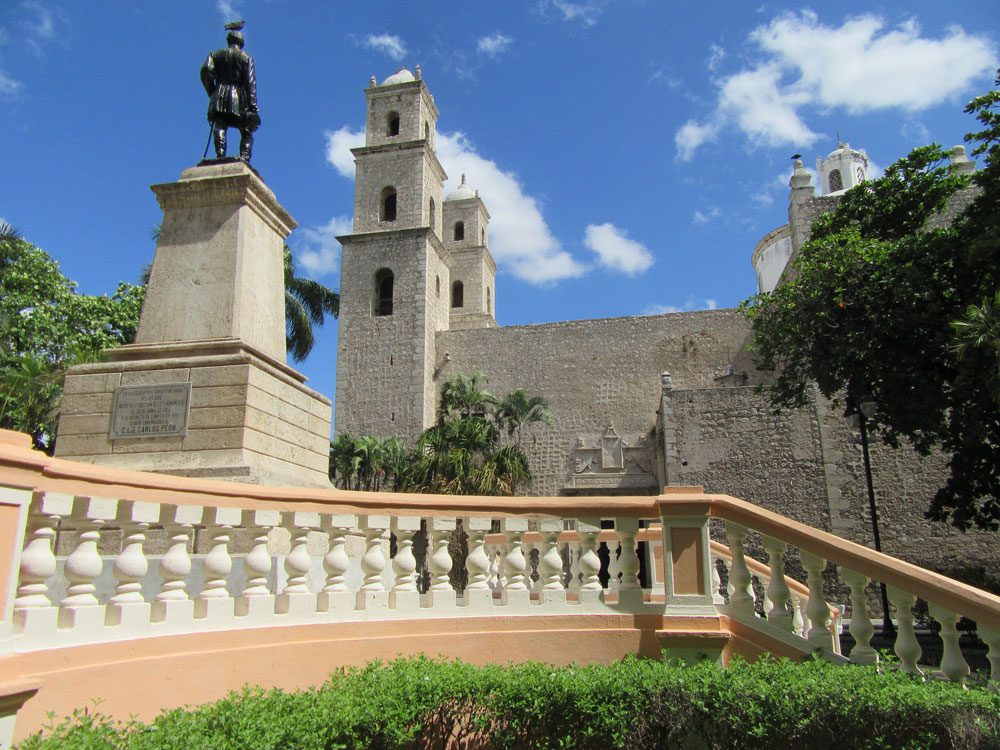 So, with my head filled with so many positive recommendations, I decided Merida would be a fitting place to spend my birthday this year.

And after an easy two-hour flight from Guadalajara, I quickly discovered that the charming capital of Yucatán was indeed an ideal choice for a getaway.

The first thing I noticed was how the colorful streets are filled with 18th and 19th century colonial buildings that have stood the test of time – although some only just. It could be argued that the edifices have lost their beauty from years of neglect but I loved their fading opaque colors, the spider webs of cracks in the corners and the tropical plants dangling down off the rooftops and crawling up the window grills.

Merida has been strongly influenced by Spanish, French, Dutch, Lebanese and Mayan culture. It is said that at the turn of the 20th century Merida was home to more millionaires than anywhere else in the world and the upshot of such affluence is documented in the luxurious mansions that line Paseo De Montejo, the city’s main avenue. Sadly, these magnificent constructions have grown further and further apart from each other as they’ve been replaced with significantly less impressive shops and restaurants. 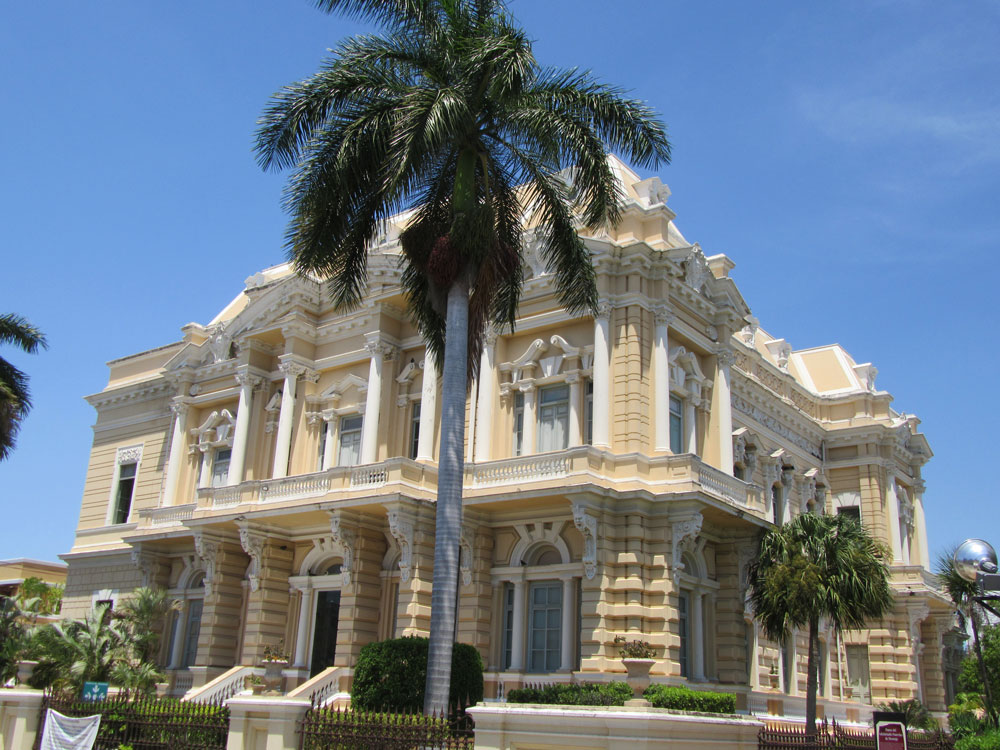 Merida is sometimes called “The White City,” although the reason is unclear, perhaps because of its numerous limestone covered buildings, or even the low crime rate. Some claim the moniker is due to the cleanliness of the place but I wouldn’t bank on this. Although cleaner than Guadalajara, I wouldn’t exactly call Merida spick and span.

Merida is the cultural center of Yucatan and houses a slew of art galleries, museums, movie theaters and shops. Chief among the museums is the Gran Museo del Maya, which has 1,100 preserved Mayan artifacts in an award-winning modern building. Truthfully, the Mayan display pales in comparison to the famous Museo Nacional de Antropología in Mexico City.  Coupled with the fact that one of the permanent exhibitions was closed during my visit (meaning I was done after 45 minutes), I ultimately preferred another Mayan museum, the Palacio Canton, located in a gorgeous colonial mansion on Paseo De Montejo.

About 60 percent of the inhabitants of Merida are indigenous and consequently it has the highest population of Mayan ethnicity in any of Mexico’s big cities. Not only was this noticeable with the museums dedicated to Mayan culture but information signs around the city even featured the Mayan language, in addition to Spanish and English.

Due to the various influences of different cultures, the cuisine of Yucatan is an incredible cornucopia of different flavors and origins. I’d got the bus from the airport to the city center which takes about 30 minutes and felt rather peckish as I stepped off, so my hungry eyes were on the alert for tempting street-food snacks. One that I kept coming across surprised me as it was amiddle-eastern dish called Kibbeh, a sort of pastry made from bulgur wheat with meat and spices stuffed inside. 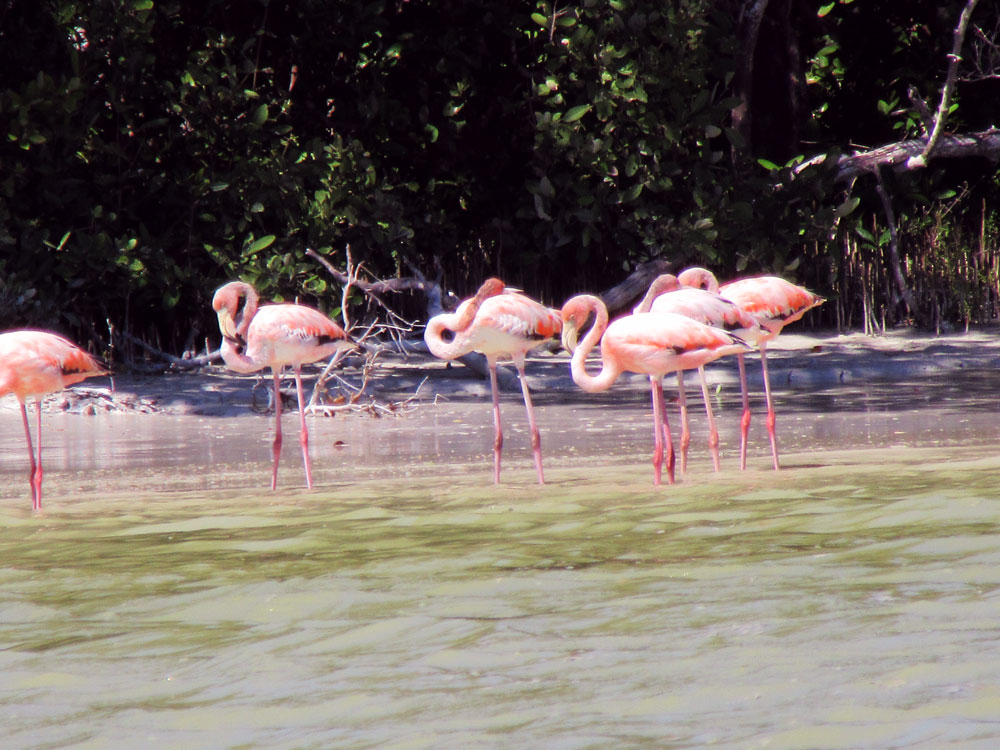 Hailing from an island with a lot of middle-eastern influence in its cuisine, I was eager to try this familiar looking dish. Although the recipe had been adapted here in Merida, I was impressed by how this dish and food from other cultures have been preserved in the Mayan cuisine of Yucatan. A similar surprise was the use of Edam cheese, originally from the Netherlands, in some of the dishes. Aside from these surprises, many of the dishes were as you might expect to find in the south of Mexico: conchita pibil (marinated pork dish), sopa de lima (chicken broth with lime) and papadzules (egg tacos drenched in pumpkin seed sauce).

As I was on my way to La Chaya Maya – a highly recommended restaurant – for my first lunch in Merida, my travel companion was seduced by a fast-talking local who convinced him that one of the best restaurants was only a block away. We hesitantly followed him to La Prospe Del Xtup, which featured a beautiful inside courtyard with a fountain. We were relieved when they brought out some delicious complimentary entrees which happened to include more Kibbeh!

A later visit to La Chaya Maya ended up being a bit of a letdown, but we may have ordered incorrectly. The eatery was thematically decorated and there were women making hand-made tortillas in plain sight by the entrance doors. For dinner we went to Apoala – also highly recommended – which was a little pricier but had delicious options and great service. Here, I tried lobster pozole for the first time.

One of the main things I’d been looking forward to seeing during my trip was the nature of Yucatan, particularly the Celestún biosphere reserve – famous for its flamingos and other wildlife.

Celestún is about 50 minutes from Merida by car but we opted for the more economical option of the bus, which took just over two hours.

To ensure we got there early, we had a 5 a.m. start. On arrival, we jumped off the bus along with a French couple who had the same idea – or at least half of the couple because the driver started to make off with the French girl still on board until we banged alongside it for him to stop! 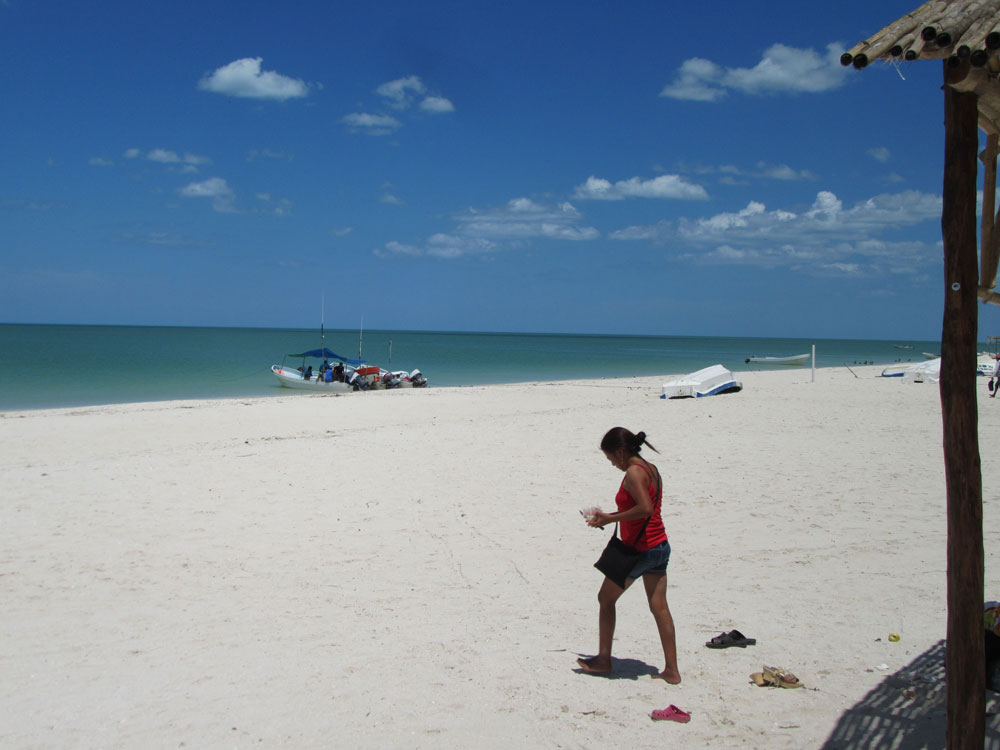 The four of us decided to team up to split the cost of the boat tour that would take us up the estuary to see the flamingos and explore the mangroves. Flamingo season is from December to early March, so we weren’t sure if we were going to spot any in April but we wanted to take the chance. The price floored us, at 1,800 pesos per boat, which even divided by four was a little steep. So we waited an hour for others to come along and help split the cost. Eventually a Mexican couple and their baby joined and we set off. Sure enough, after turning around a river bend we spotted a pair of flamingos. The tour guide noted they were young ones because of their size and pale pink color. We couldn’t get too close, so our camera lenses and binoculars had to suffice. Nonetheless, we were so thrilled that we just snapped away and gawked at these awkwardly beautiful creatures.

In the mangroves we saw other exotic birds, including woodpeckers. Giant termite nests loomed above us in the trees and we eagerly gazed at the water below hoping to spot a crocodile (no such luck). We stopped at one point to take a dip in the “ojo de agua” or waterhole – a delightfully refreshing break from the heat. The beach of Celestún was only ten minutes away so we also had a swim in the beautiful green sea where the Gulf of Mexico and Caribbean meet. Fortunately,  this pristine beach hasn’t yet been devastated by tourism.

Overall I found Merida has everything you could want from a short trip.  There’s plenty of culture and history to absorb, divine cuisine that inevitably leaves you stuffed yet craving more, and breathtaking natural beauty. After leaving I could easily understand why so many people had been so animated when recommending it and I felt ready to do the same.