When news of the September 19 earthquake reached lakeside, the point men for Chapala Sunrise Rotary’s relief effort, President-Elect Hector España and Past-President Walter Thornton, came up with a game plan. 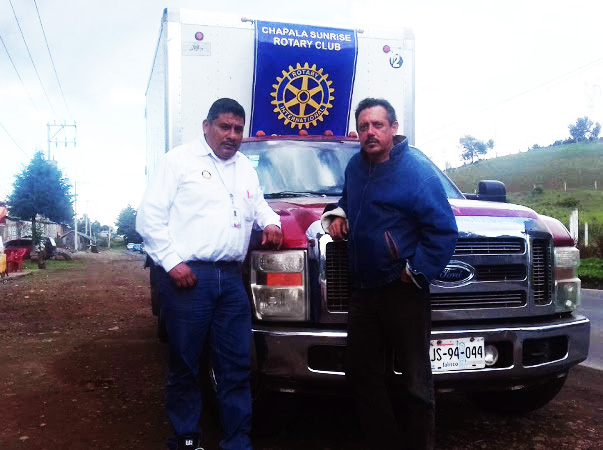 They decided to collect supplies and deliver them directly to the hardest-hit area, making sure they reached earthquake victims rather than a local government warehouse.

Their mission was accomplished on all fronts, but not before a long and arduous journey that both men say they’ll never forget.

Thanks to the word of mouth and generosity of countless Lakeside patrons and volunteers, by last Saturday España’s restaurant, Manix, was filled with food, water, clothing, toiletries, tents – virtually anything that could be of use to families left homeless in the aftermath of the devastating quake.

By 10:30 p.m. a rental truck dispatched from Guadalajara had been packed with three tons of supplies. The two Rotarians then headed south to Ajuchitlan, Morelos, an area near the epicenter of the quake three hours south of Mexico City.

The journey came to an end 19 hours later just short of their destination, despite the rental truck breaking down near Michoacán (a replacement was sent out), a GPS malfunction and an unplanned detour. The cobblestone street had become impassable due to damage from the earthquake and mudslides.

After slogging a few miles through pouring rain and deep mud, España arrived at the village before Ajuchitlan where he saw people cutting down trees to build shelters. Together with grateful villagers he returned to the truck to begin unloading the supplies.

Ultimately, the supplies from lakeside reached people in the villages of Axiochapan, Ajuchitlan and Santa Maria de Ahuacatitlan. España and Thornton say they were moved by the sight of many smaller relief efforts along the way, by average citizens in cars filled with food and water.

The pair returned home exhausted, fulfilled and grateful to the many Lakesiders who donated goods, time and money to bring the relief effort to fruition.