To those who left the ice and snow of the northern United States and Canada, possibly the last sport they would have expected to find in this sunny utopia would be ice hockey. However, those from the snowlands and other areas who crossed off hockey from their list of sports, either as a spectator or player, can write it back in, as it is alive and flourishing in Guadalajara.

The driving force behind the sport locally is Aurelio Herrera, manager of the Pista Hielo on Avenida Mexico, whose immediate aim is to produce a four-team league, and eventually Mexican players capable of entering the professional ranks.

Coaching the local talent is Bill Rand, who played for City College in New York, assisted by Ed Lyon, who wore the magic number 9 for the University of Tennessee Knights, and later at Hamilton College, Utica, N.Y. (For the uninitiated, NHL legends Gordie Howe and Bobby Hull wear number 9).

A problem facing all players, particularly the Mexican beginners, is the lack of and high cost of equipment. Sticks have a habit of breaking, and in turn the pocket book of a number of enthusiastic learners. If you have friends heading this way from the great white, ask them to bring some used equipment along.

Call tt the Secret Service, the Safety Commission or the Special Investigations Department — it has been known by each of those names at one time or another — it no longer exists, having been wiped out last week by Jalisco Governor Flavio Romero de Velasco. Said to be the first state to do so, Jalisco has terminated the role of what was most commonly referred to as the Secret Service, and turned over what might be described as its “legitimate” work to a newly created branch of the regular judicial police. The governor’s dramatic move was based on the fact that the Secret Service, with all it implied, was unconstitutional.

The existence of that repressive body is an intolerable contradiction to the spirit of the 1917 Constitution, which provided for the protection of human rights, and it is inconceivable to have to admit 65 years later that the expressions of the Constitution in that respect are a dead letter, commented Romero de Velasco.

One report called the now defunct organization a “gestapo” and spoke of “torture chambers, refined cruelty by which victims said the things that were wanted of them, and inhuman situations.” Now detention of persons suspected of a crime is forbidden unless they are caught red-handed. The records of some 30,000 people that the feared and hated Secret Service had detained, were turned over to the office of the attorney general. 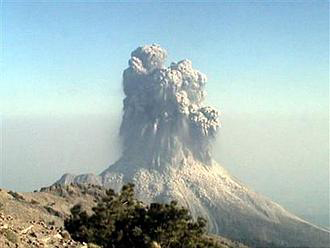 Two weeks of intensified tremors have fueled speculation of an imminent eruption — one that could threaten the lives of thousands of Jalisco citizens.

While scientists are reluctant to predict the exact timing of an eruption, those living close to the rumbling Colima Volcano are busy preparing emergency evacuation procedures.

Despite its name, the Colima Volcano actually lies well inside Jalisco state boundaries, about 80 miles to the south of Guadalajara, and not in Jalisco’s neighbor to the south, the state of Colima.

Every day for the last two weeks a helicopter has flown a team of French volcanologists over the fiery crater, which now emits a permanent plume of thick white smoke. The Mexican Army is preventing the curious from scaling the 3,280-meter peak, which, according to government officials, does not represent an immediate danger to the surrounding population.

Despite these assurances, churches and schools in villages surrounding the volcano have been besieged by people seeking information on emergency evacuation procedures to be used if the volcano explodes.

Experts say the worst-case eruption would involve a 50-mile radius around the volcano covering an area inhabited by some 200,000 people. The five-million-year-old volcano has erupted 29 times since 1576, the last time in 1913, when thousands of acres of agricultural land were covered with lava, but no loss of life was recorded.

Rodriquez Carillo, 88, a resident of the village of Tonila — only six miles from the volcano — remembers fleeing the erupting colossus on foot as a ten-year-old in 1913. “Nothing happened then, so why should anything happen today when we have all this prior information?”

A band of armed robbers pulled off a daring bank heist at the BBVA-Bancomer branch in Ajijic Friday, March 16, making off with a sizable booty in a carefully scripted plot that nearly unraveled due to a close encounter between the criminals and an unsuspecting, elderly, foreign resident, who blocked their getaway for nearly ten minutes as he tried to park his car. Anxious to hustle the obstacle out of the way, they shouted and flashed their weapons. Understandably flustered, the driver inadvertently stalled and was unable to restart the motor. The desperate thieves finally pushed the car through the Colon-Ocampo intersection, freeing the getaway vehicle to round the corner and speed off on Calle Constitucion. Police say they got away with some 800,000 pesos.

Scholars have debunked the “irrefutable evidence” provided by thousands of web sites predicting that a cataclysmic event will occur on December 21, 2012 — the day the Mayan calendar supposedly ends.

And the widespread perverse fascination with this possibility is encouraging Mexican tourism authorities from trying to lure doomsday prophecy believers, mystics and the merely curious to the country for next year’s “grand event.”

More than 4,000 hotel rooms have already been booked in the Yucatan peninsula in anticipation of the December date. State authorities forked out eight million pesos to launch a promotional campaign. Federal tourism chiefs may give short shrift to the mythology, but they’re not apologizing for jumping on the bandwagon.

“There’s much interest, more than three million web sites are talking about what’s going to happen in 2012,” Tourism Secretary Gloria Guevara said last week. “Mark the 21st of December in your calendars. It’s important to be in Mexico on this day.”