Long-term government investments have been allocated to develop the northeastern section of Lake Chapala, between the town of Chapala and San Pedro Itzican, according to Jalisco Governor Alberto Orozco Romero who spoke October 5 at a regional development assembly in Atotonilco, Jalisco.

The main government investment of 16.4 million pesos will be enough to completely finish a 38-kilometer stretch of highway between San Nicolas Ibarra (just east of Chapala) and Poncitlan, where the new road will intersect with the Guadalajara-Ocotlan highway, said the governor.

When the new road is finished, all the Jalisco side of Lake Chapala and most of the Michoacán side will have paved access routes.

While Mexican exchange controls are buffeting businesses all along the U.S. side of the border, this year’s two devaluations of the peso are allowing foreign-owned “in-bond” plants south of the border to thrive and increase in number. Mexican labor is now attractively cheap for Mexican-based maquiladoras, which assemble goods with imported parts and then ship the completed items back to the U.S. No import taxes by either the Mexican or U.S. are levied on the goods moving back and forth and the U.S. charges a tax only on the value of the Mexican labor added to the products.

Not six months ago, many of the owners of the in-bond plants were outlining plans to move their Mexican facilities to Taiwan, Hong Kong or South Korea because Mexican wages were increasing and the peso was greatly overvalued.

The two devaluations earlier this year—in February and August—have dropped the exchange rate from 26 pesos to the dollar to 70. Today, Mexican border-side workers are earning about 156 dollars a month, which is almost the same as those in Taiwan and Hong Kong.

Now, according to a border businessman, various plants are looking to open up shop in Mexico asap. 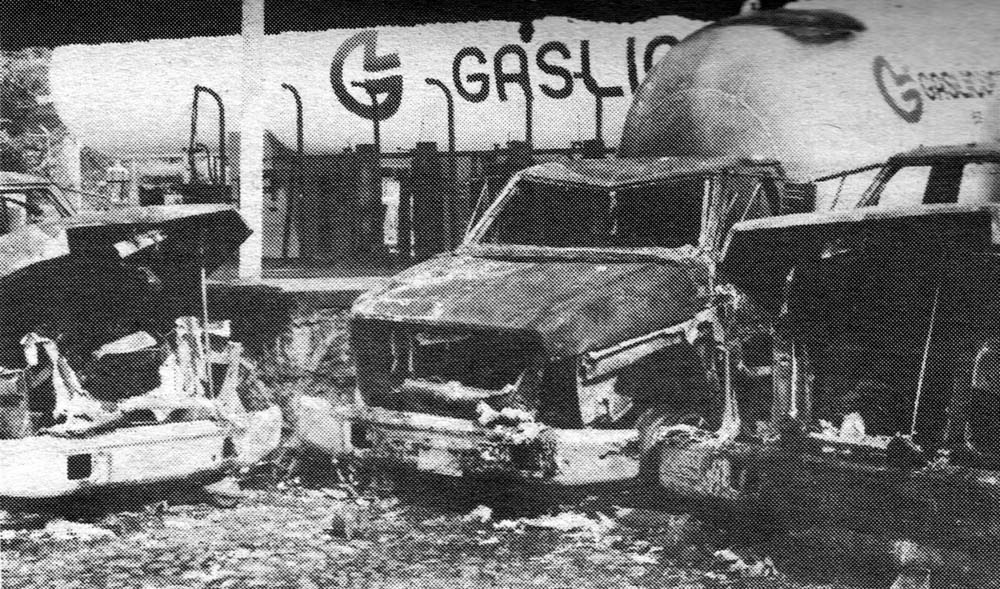 Approximately 1,000 residents of Ajijic were evacuated October 6 after a gas tank exploded in the Gaslicuado plant located on the Chapala-Ajijic highway, The night watchman on duty suffered first-degree burns.

Concerned that the fire could spread and ignite the two 127,000-liter stationary tanks located just behind the central working area of the plant, authorities ordered the evacuation of residents from the immediate area. Firefighters from Guadalajara extinguished the fire and secured the area by 11 p.m. when evacuees were permitted to return to their homes.

Gringo jailed for corruption of minors

A 72-year-old U.S. citizen is behind bars in Chapala after police discovered evidence indicating he kept nine young women, including two minors, at his Riberas del Pilar home in exchange for sexual favors. Arlin Arthur Mauer faces a possible five-year jail term if found guilty of the charge of corrupting minors.

After Chapala police picked up a 14-year-old Jocotepec girl for drunken and disorderly conduct, she was turned over to social workers at the local Family Development Center (DIF). There she revealed that she was living at Maurer’s rented home, where she received cash, clothing, food and lodging in exchange for allowing the accused to photograph her naked from the waist up.

With a warrant to search his home, police arrived unannounced  and discovered that nine young women, all aged 22 and under—among them a minor and U.S. citizen—were living with Mauer in circumstances like those described by the Jocotepec girl. With photographic, video and computer equipment, more than 30 video tapes and scores of photographs were confiscated as evidence, including numerous images of Mauer’s ‘guests’ depicted partially nude and scenes showing him engaging them in sexual acts.

Mauer, arrested on charges of corrupting minors and inciting prostitution, was incarcerated in the Chapala jail and denied release under bond.

Rosa Estela Lares, the agent in charge of investigating the case, told this newspaper that Mauer was brought before local authorities on similar charges several years ago, but as a first-time offender got off with payment of a modest fine. This time he may be subject to imprisonment of up to five years and expulsion from Mexico.

One hundred years on from the sinking of the Titanic, the supposed heroism of a Mexican passenger has been dismissed as a tall tale.

For 30 years, Alejandro Garate Uruchurtu has been spreading word of how his uncle Manuel Uruchurtu gave up his seat on a lifeboat to save the life of British passenger Elizabeth Ramell. As a result, in February 2011 Uruchurtu was honored as a “Chivalrous Hero” by the Sonoran History Society, in a first step toward recognition as a national hero.

Garate even claimed the selfless act had earned his uncle recognition in the U.S. Senate, citing evidence unearthed by researcher Robert Bracken. But Bracken, treasurer of the Titanic International Society, denied this claim, declaring, “I have never written a word nor found any material on Ramell and Uruchurtu.”

“I also have no knowledge of any ‘act of heroism’ recognized by the Senate of the United States,” added Don Lynch, an official historian of the Titanic Historical Society, established in 1963. The only mention of Uruchurtu on record was among the passenger list, Lynch said.

Mexican author Guadalupe Loaeza has decided not to republish her book, “El Caballero del Titanic,” having based it entirely on the questionable testimony of Garate, who also wrote the preface and receives a percentage of royalties.

“He has been feeding this legend for 30 years without a single document [of proof],” Loaeza said.