An ice skating rink in the Villa Nova development in Chapala will open in November. The rink will measure 75 feet by 55 feet and will also house a coffee shop and ice cream stand.

Hwy to be widened

US nun behind bars, voluntarily

U.S. nun Sister Antonia Brenner, 55, has voluntarily committed herself to La Mesa Penitentiary in Tijuana. She terms herself a “prisoner of love.” Sister Antonia lives in a cell in the women’s sector of the jail. Each morning she, dressed in the traditional blue flowing habit, answers the roll call at 7 a.m. After raising 7 children, Antonia Brenner became a nun and began her ministry attending to the prisoners spiritual needs.

Her dedication has transgressed the boundary of objective onlooker. “It is important to let the prisoners know,” says Sister Antonia, that she is not just a church official that talks “at” them from behind a desk.

“I could not do my work on a nine-to-five basis. This is not a job or work assignment to me; it is my calling. The prison is my convent.

She makes it a point to eat what the inmates eat, to sleep where they sleep and to answer the roll call each morning. She however, has unlimited access in the prison and walks freely unescorted between the men and women’s sectors. She attends not only to their worldly concerns—a typewriter, mail delivery or medicine—but attends to them spiritually in a rehabilitative sense.

The crucial testimony came from two ex-Jalisco State police officers turned bodyguards for Guadalajara drug baron Ernesto Fonseca, Jorge Godoy and Rene Lopez Romero. They said that Zuno Arce had met with drug kingpin Rafael Caro Quintero in 1984 to suggest that they kidnap Camarena Salazar in order to resolve DEA intrusions into their lucrative drug operations. They also placed him at Caro Quintero’s house at Lope de Vega 881 in Guadalajara where Camarena was tortured and eventually killed in early February 1985.

Zuno Arce, who had fled Mexico to live in San Antonio, Texas, was arraigned as a material witness in the trial of Juan Bernabe Ramirez in 1989 before being subpoenaed before a grand jury and charged with complicity in the kidnapping and murder.

Quotes on Lake Chapala from 2002

“The lake is still empty even though heaven has been generous in sending rain. What’s the cause? Man and his torpidity and his ambition…a lack of appropriate legislation…irresponsibility and corruption have resulted in an ecological catastrophe of enormous dimensions.”

—Guadalajara Cardinal Juan Sandoval in homily delivered during Virgin of Zapopan pilgrimage to Chapala in August.

“Emptying all the water from the Solis and Allende dams, and indeed all of the dams in Guanajuato, will not contribute to saving Lake Chapala.”

—Guanajuato Governor Juan Romero Hicks, commenting on the prospect of future water transfers for the lake in October.

“[The Lerma-Chapala basin] is the clearest example of the unsustainable use of water … It’s a living lesson of what should not be done.”

—Environment Secretary Victor Lichtinger, speaking in Guadalajara at an international conference on environment and sustainable development.

“Chapala is an illusion. Agricultural production is a reality … Blood may run, but water no!”

—Slogans of Guanajuato farmers protesting renewed water transfers from dams in Guanajuanto to the Lake, at the Consejo de Cuenca meeting in Metepec, Estado de Mexico in November.

“Why are we fighting? We are all Mexicans, we all need water, we need one another. Those of us living around the lake need you to produce our food. You need us as consumers.”

Two dozen bold souls gathered along the waterfront Malecon and stripped down to skimpy swim wear before making a mad dash for the chilly waters before them. But knee-deep mud soaked by an unseasonal downpour the previous night made for mucky conditions better fit for crocs and swamp critters than for ursine beasts of the icy far north. Nearly half of the swimmers promptly sank into the thick black goo, looking every bit as if they were being swallowed up by quicksand. 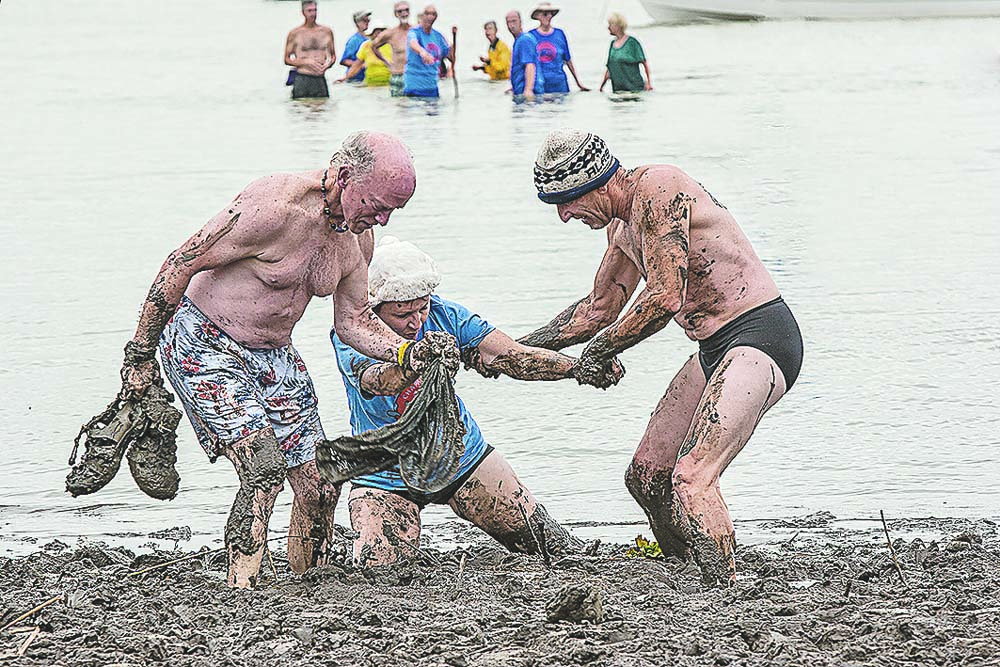 As those who the managed to avoid the trap helped liberate their cohorts from the miasma, scores of on-lookers–including a good number of astonished Guadalajara tourists–took in the peculiar scene. Soon enough all were frolicking in the waist-high water, cheerfully splashing about in the company of a pair of native herons and a large flock of bright yellow rubber duckies.

It was all a great hoot as well as a financial triumph for a worthy cause. Margy Kassier, president of Cruz Roja International Volunteers, reports proceeds of 230,000 pesos, more than triple last year’s net and the best take in the four-year history of the polar plunge. Raffle ticket sales brought in about two third of that amount, with the rest coming from sponsorships of the dippers.

Kassier took advantage of the event to publicly recognize Polar Bear plunge founders Pedro and Yvonne Kertesz, awarding them official titles as Papa and Mama Bear. She extended special thanks to the Beer Garden Restaurant as venue host and members of the Lake Chapala Kayak Club who helped round up sponsors and paddled in from Ajijic to encourage the swimmers.