Barely two months after stating he would temporarily exempt Mexico, Canada and the European Union from the steel and aluminum tariffs (25 and 10 percent, respectively) recently applied to China and other countries, U.S. President Donald Trump has decided to include those entities much earlier than expected in what may be the start of a protracted trade war. 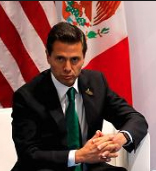 Neither the two neighbor countries nor the E.U. are happy about this about-face.Mexico’s government has reacted in kind, announcing Thursday that it plans to levee its own duties on products from the United States, including pork belly, apples, grapes, blueberries, cheeses, and, yes, steel.

“Mexico reiterates its position against protectionist measures that affect and distort international commerce in goods,” read a statement issued by the Mexican government.

The trade fracas between the United States and its regional “allies” coincides with the renegotiation of the North American Free Trade Agreement (NAFTA). Many analysts believe Trump is using the possibility of his country’s withdrawal from the agreement as leverage in getting his own way in the deal.  The Mexican government says any coercive measures are “unacceptable.”

Immediately affected by Trump’s decision was the stability of the Mexican peso, which dropped to nearly 20 to the dollar Thursday after the Trump administration announcement.

It’s worth remembering another occasion where the United States implemented stiff trade tariffs: In 1930 Congress passed the Smoot-Hawley Act, which saw duties on imports soar by 20 percent.  The move has since been seen by many economists as having deepened – rather than mitigated – the Great Depression.