In multilateral meetings around the world, policies related to junk food, mother’s milk and access to medicines and vaccines — all widely thought to have been moving in a direction favorable to underdeveloped countries such as Mexico — have taken a turn in the opposite direction. 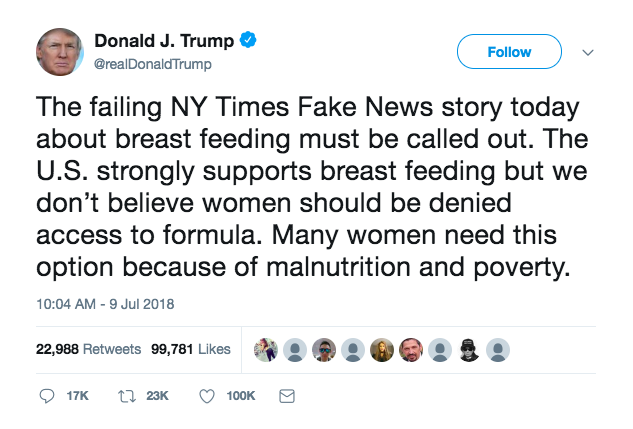 The reversals occurred at the 71st U.N. World Health Assembly in Geneva and during NAFTA negotiations in the western hemisphere and have been spearheaded singlehandedly by the United States under the banners of curtailing “free rides” for small countries and of promoting big business, intellectual property rights (for large pharmaceutical companies), free speech (for advertisers), free choice (by consumers of mass-produced food) and even science (alternative science).

One such reversal — a U.S. attempt to thwart warning labels on sugary and junk foods such as soda pop — has been building both in Geneva and in the NAFTA talks between Mexico, Canada and the United States. (President Donald Trump is a longstanding critic of this 1994 trade agreement, which principally reduced Mexico’s high tariffs on imported Canadian and U.S. products.)

This spring, for example, the United States succeeded in weakening the World Health Assembly’s advice to developing countries such as Mexico that are afflicted by soaring obesity (spurred by sky-high consumption of junk food produced by giants such as Nestle, Coca Cola, PepsiCo, General Mills and others).

Similarly, in the NAFTA renegotiations initiated by Trump, the Office of the United States Trade Representative is trying to prevent Canada and Mexico from putting improved consumer warning labels on these foods. Many health authorities note that newer, more graphic warnings, such as those pioneered in 2016 by Chile – which also banned Tony the Tiger – have been very effective in deterring people from buying unhealthy foods. This U.S. pressure against following Chile’s lead comes after months of earlier pressure on Mexico not to heed the health recommendations of the U.N. and its own national health institute, the Instituto Nacional de Salud Publica, on combatting diabetes, which in 2017 caused twice the number of deaths here as did murders – currently at a record rate.

Other health measures in the cross hairs of the Trump administration (as well as the Obama and Clinton administrations) are efforts to make lifesaving vaccines and drugs, such as medicines for tuberculosis, more easily available — that is, generic and cheaper — in underdeveloped countries. U.S. resistance to making medicine more available is usually couched as a way of protecting patents, intellectual property rights and the desire of pharmaceutical companies to recoup research investment.

Similarly, the United States once resisted liberalizing restrictions on H.I.V. medicines. (When public protests finally won out, the development of generic H.I.V. drugs is said to have stopped the epidemic.) But increasing the availability of other drugs is still being prevented by big drug companies, often acting through U.S. government trade representatives, who have made well-attested economic and political threats against health advocates in Latin American countries such as Mexico, Colombia and Ecuador. These health advocates say Trump is turning the screws ever tighter.

A third health issue coming under fire is one that was thought to have been settled decades ago — the promotion of mother’s milk instead of commercial infant formula, especially in poor countries. The United States made a harsh threat against Ecuador at the spring U.N. health meeting, where many delegates reported (anonymously, for fear of U.S. reprisals) that they were stunned, intimidated and puzzled by intense U.S. pressure against recommending breast milk.

As Ecuador was set to introduce a seemingly innocuous recommendation of mother’s milk (crucial to infant health in countries where clean water is scarce), U.S. representatives threatened economic retaliation and even the withdrawal of military aid (crucial in the Ecuadorian government’s fight against violence caused by the drug trade in nearby countries).

The international breast-milk brouhaha ended with a strange twist involving Russia, recently suspected of duping, blackmailing or bribing Trump to do its bidding as it hews to old, Cold-War goals to weaken U.S. stature and alienate U.S. allies.

After World Health Assembly delegates were left aghast at the strong-arming of poor countries over mother’s milk, Russia stepped in as the hero, apparently the only country not intimidated by the United States.

“It is wrong when a big country tries to push around some very small countries,” the Russian delegate told the New York Times. The delegate then introduced the breast-milk recommendation, thus undoubtedly winning the respect lost by the United States.