Since the onset of summer rains, swaths of aquatic weeds have sprouted up in Lake Chapala’s waters. 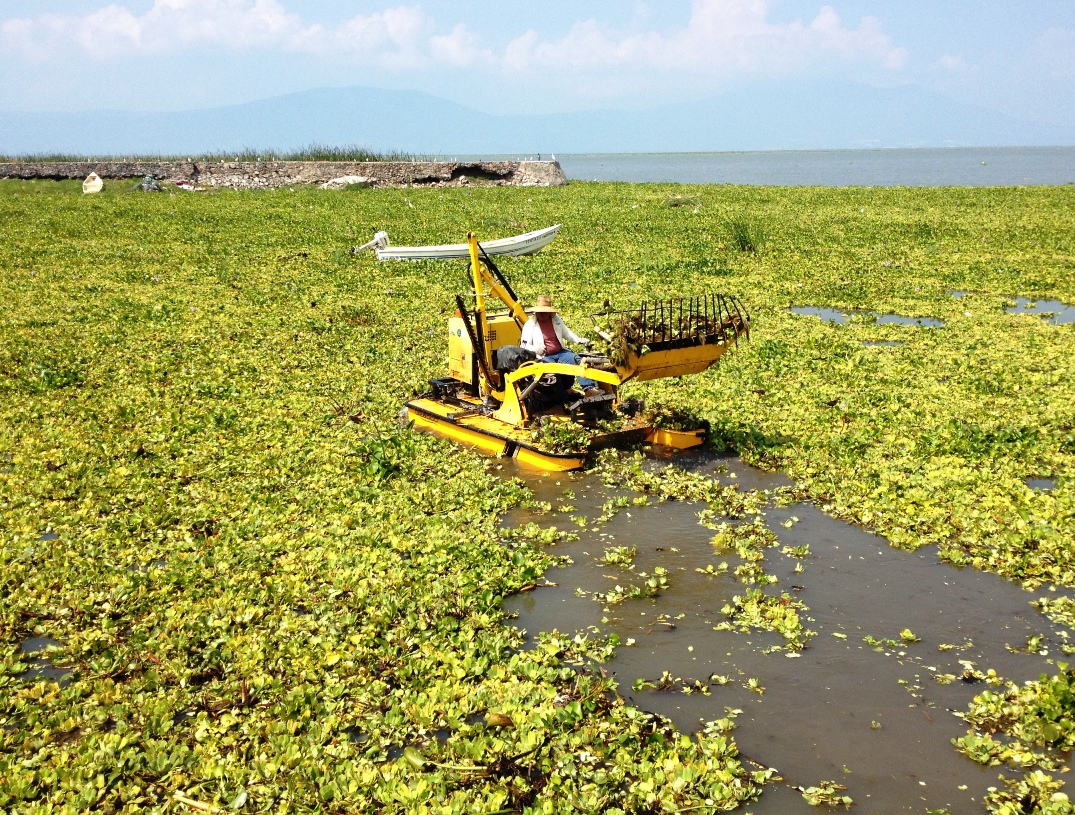 Under a program funded by the state legislature, operations are now under way to control excess reproduction and buildup of lirio (water hyacinths), repollo de agua (water lettuces) and tule (reeds).

The weed containment project is run under the aegis of Aipromades, an association of 14 municipal governments in the lakeshore region formed in 2009 to address environmental issues of common interest. Since early this month, a crew of nine workmen employed by the association has been clearing the pesky plants from the prime tourist zone along Chapala’s waterfront.

The labor has involved mechanical collection of the weeds with a Weedoo TigerCat aquatic harvester imported from Florida, manual extraction of plants deposited on the shoreline and hauling away debris  with tractors and trucks.

The clean-up has also included retrieval of tons of man-made wastes, including at least 70 nets discarded by local fishermen, as well as litter and construction materials dumped by tourists and inhabitants.

Interviewed this week by the Guadalajara Reporter, project supervisor Juan Manuel Vargas Godinez explained that work in Chapala will be suspended and moved to the east end of the lake, targeting the influx of lirio carried by the swollen waters of the Lerma River at the twin towns of Jamay and La Barca and the Zula River at Ocotlan. To beef up the effort, a second and larger harvester has recently been purchased from a Swedish outfit and will be added to the Airpromades fleet.

Vargas noted that the so-called Chapala Limpio program is focused at limiting excess spread of lirio — a prolific plant introduced to Lake Chapala more than a century ago — and the tule and repollo species native to its habitat. He stressed that patches of tule are left intact or contained at San Antonio Tlayacapan and other points along the lakeshore where they serve natural functions for breeding fish and nesting birds.

Chapala Limpio was launched in November 2016 with a four-million-peso investment in equipment and manpower earmarked by Jalisco legislators and channeled to Airpromades through the Jalisco Environment Agency (Semadet). Five million pesos was allotted last year to upgrade operating gear. Another million went to the 2018 funding package, covering salaries for Aipromades employees headquartered in Chapala.