Artist and writer Gloria Palazzo, a 25-year resident of Mexico, died August 12 at the Casa Nostra care home in Riberas del Pilar, at 89 years of age. 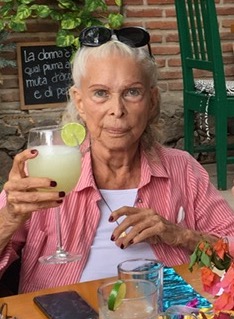 Once her children had flown the nest, Gloria moved to Arizona, finding work in the Grand Canyon Visitors Center. She later joined the U.S. Peace Corps, living and working for two years in Ecuador.

Her lust for adventure continued. Gloria moved to Guadalajara in 1996 and became apprenticed to British artist Pasha Graham Powell, learning how to create unique masks from reusable materials. Powell, who lived for many years in India before relocating to Mexico, would scour the streets for all kinds of discarded bits and bobs to make his masks.

Through her relationship with Powell, Gloria became integrated in Guadalajara’s British community, attending their monthly parties on a regular basis. After seven years in Guadalajara, she moved to the lakeside area, buying a house in Riberas del Pilar, which she completely renovated, filling its nooks and crannies with her many works of art.

During her years at lakeside, Gloria was very active in the Ajijic Society of the Arts and showed her work in many local exhibits. She also joined the Writers Group, penning multiple articles for the Ojo del Lago magazine over a 10-year period. Gloria had the ability to “see humor in the everyday mundane things of life,” publisher David Tingen said. She was nominated in 2011 in the best humor category in the 2011 Ojo de Lago awards.

Ever on the lookout for new experiences, Gloria also embarked on a round-the-world trip as the only passenger on a cargo ship freighter.

Friends remember Gloria’s radiant personality, fierce desire for personal improvement and knowledge, and genuine interest in the welfare of others. Said close friend Sharon Sibson: “Gloria was an amazing woman who inspired me with her talent, tenacity and relentless strength.”

Friends also highlighted the excellent care that Gloria received during her final weeks and months at Casa Nostra.

She leaves behind three sons, one grandson and two great grandchildren.