Chapala was chosen as one of 13 venues for inoculations against the SARS-CoV-2 virus scheduled April 28 through May 4 for teachers and administrative staff of Jalisco’s public and private educational institutions. 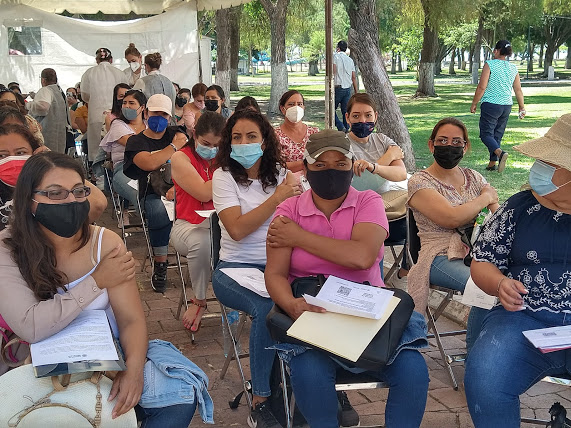 The city’s La Cristianía Park headquartered vaccinations for academic personnel employed in Chapala, Jocotepec and nine other municipalities in the Southeast Region, plus neighboring Ixtlahuacán de los Membrillos. Finely tuned logistics implemented early Wednesday, April 28, translated into efficient, trouble-free operation of the clinic for the 1,065 individuals scheduled to attend on that date.

According to site coordinator Oscar Diaz Zambrano, regional delegate for the state’s Education Department (SEP), operative wrinkles were worked out during trial runs on Monday and Tuesday. Opening up promptly at 8 a.m. on Wednesday, the first group of patients quickly got through checking of their registration documents to get their jabs within 25 minutes. Large tents were placed outside at the park’s entrance, as the initial waiting area, with three tented vaccination modules located inside the gates.

The program for application of single-dose CanSino vaccines was organized entirely by SEP and the Universidad de Guadalajara, without involving the federal government’s Servants of the Nation. The local clinic was  supported by 70 SEP employees and another 50 staffers from Chapala City Hall.