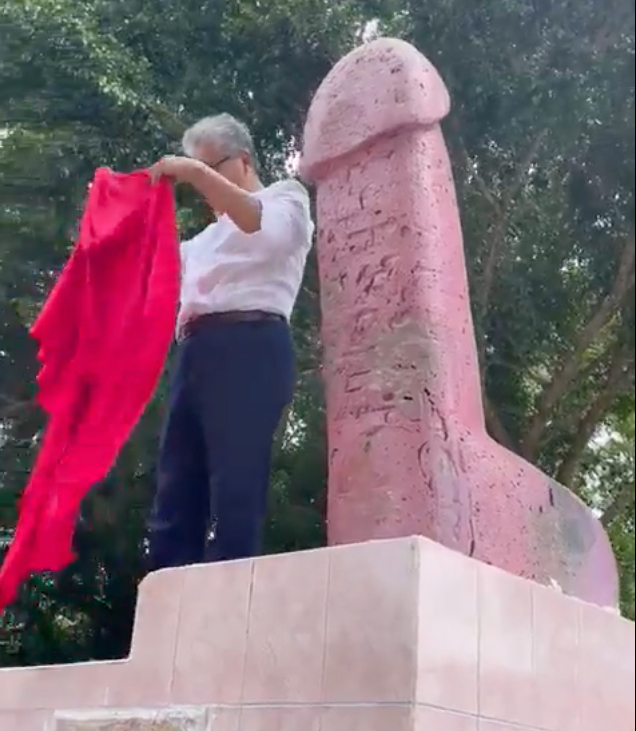 Known for her love of life, sense of humor and breaking of taboos, she made a request to ensure no one would forget her after she passed away.

She asked astonished relatives that her tomb be adorned with a statue of a large penis.

Last week, after funeral services were completed, a 280-kilogram, 1.7-meter tall male reproductive organ was unveiled at the resting place of Doña “Catita” in the cemetery of Ignacio Zaragoza in the Veracruz municipality of Misantla.

Writing on his Facebook page, Orduña’s grandson Álvaro Mota Limón said his grandmother was “a woman with a different vision than everyone else  … an icon of value, respect and courage and not morbidity.” He said “Doña Cata always questioned whether people were ashamed of said reproductive organ,” and that she believed there should be “a special day to celebrate the male reproductive system since it is the main instrument of pleasure. Just as there is a day for the lawyer, doctor and teacher, the phallus deserves one too.”

In an interview with Vice News, Mota Limón, who has two master’s degrees and has served as town mayor, said his grandmother, who had an impoverished upbringing, often used the metaphor of a penis, the slang word verga (roughly translated as “cock”) to stress on her offspring to never give up, face problems head-on and accomplish what they wanted in life.

Orduña’s grandson said full permission was granted by the city to erect the statue, and that the majority of town dwellers have given their approval, although a few “closed-minded” people have voiced discontent.

The sculpture creation process was overseen by local engineer Isidro Lavoignet, who called it the “strangest project” he has ever undertaken.