January ended on an extraordinary high note for some of La Manzanilla’s residents.  On Sunday, January 27 aquatic enthusiasts participated in the Nadando por Ellos swimathon to raise funds to improve the quality of life and dignity for five of the pueblo’s poverty stricken elders.

Too old to generate income and some with no family to provide basic care, these folks live in tragic conditions.  Lety Hernandez, owner of Estudio Maymara, could no longer stand by and do nothing.  She and her husband Conrado headed the team of volunteers to organize this amazing event.  They included lifeguards, as well as other helpers, in boats, kayaks and paddle boards 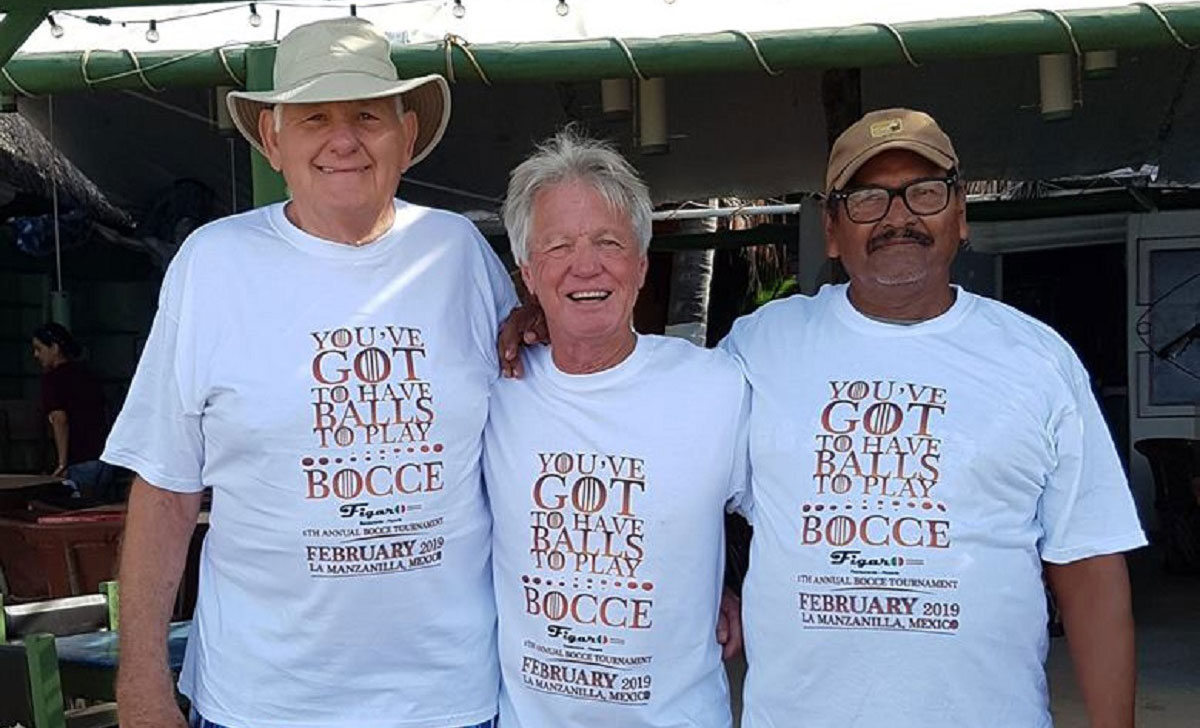 always within reach of the swimmers in case of distress. A grand total of 115,881 pesos was reached, a huge success for the second year in a row.  The sum will be divided equally among the five recipients, and will be administered by Hernandez.  She will meet with them individually to discuss their immediate needs, which include medicine, food, new mattresses, etcetera.  The balance of their funds will then go into a bank account to be used as needed. This is a wonderful outcome made possible by the members of the community.

I went to a Garden party …

The Fiesta fundraiser for the ejido organic youth garden on Wednesday January 30 brought 80 happy people together for great food and music and raised 18,180 pesos after expenses, enough to contribute to next year’s start-up and care for the garden over the summer.

Many thanks to the cooks behind the excellent tapas and Muy Rico for their donated edibles; Michel at Don Raoul’s restaurant and Catalina Foundation for loaning enough chairs; key volunteers Carmen and Ben on beer patrol; Catherine and Martin for their tireless support with the students; Antonio the garden wizard who keeps it going all year; Peter and Linda the Garden Godfather and Godmother; Jacob Twersky, the woofer on this watch; Raoul and Angel, musicians from Barra/Melaque who entertained us so tunefully; Rene and Denis, Pat and Stan who support the garden for their whole holiday; and others who are overlooked in this short list but know in their hearts that this program is helping to forge a healthier, more vital future for Mexico.

Catherine Collins, one of our major supporters, and mother of program founder Davidson Collins, now living in Mexico City, read Davidson’s inspiring message informing us that Mexico now has 100,000 organic gardeners, and the number is rapidly increasing.

The call is out for the community to bring more kitchen compostables to the garden or the garden stand at the tianguis on Fridays, to continue to build the soil, and volunteers now or next year, people who love being in the dirt, growing things, giving back to lovely La Manzanilla, and working with the kids. Look for the organic produce on Fridays, and donations are always welcome.

So many events are happening this weekend as well as in the week to come that your head will be spinning.  Just check out the following  list of choices.

The Writers’ Group has grown so much in the last couple of years that they have had to split into two subgroups and meet in two separate venues.  Both groups do still meet on Saturday mornings from 10:30 a.m. to 12:30 p.m., at Restaurante Martin’s and La Playa Restaurante. Members from both groups do participate in the Spoken Word Charities series.  This Thursday evening, 14 members will read an eight-minute segment of their literature at Casa Luz, Boca del Rio 75, from 5:30 p.m. to 7:30 p.m.  There will be wine and finger foods available after this popular event.

The 5th annual Bocce Ball Tournament has become so popular that the committee decided to make it a two-day event.  This weekend, February 9 and 10, Figaro’s Restaurant will once again be hosting the competition, beginning at 9 a.m. with breakfast. The completion will be fierce, so come out and cheer for your favorite team.

Come and participate in an informal discussion of death and dying with facilitators Eva and Rhema. This is an opportunity to have an open conversation about our thoughts of death and dying in a safe, confidential environment. Held on Tuesday, February 12, 3-5 at Casa Luz.  Refreshments will be available.

Paws for the Cause

Cisco’s Amigos will be hosting their annual fund-raiser for the upcoming spay and neuter clinics being held in La Manzanilla in March.

Paws for the Cause will be held at Palapa Joe’s Restaurant on Tuesday, February 12, starting at 6:30 p.m. Tickets are 250 pesos and are being sold at Palapa Joe’s, The Helping Hands Bookstore and the Lab.  There will be door prizes and fun stuff to be raffled off as well. Music will be provided by the Something New Band.  So bring your dancing shoes and something yummy to share.

On Saturday February 16, at Quinta Valentina’s Restaurant, you will be able to enjoy a meal, dance the evening away to the Ol’ Country Boys playing country, rock and blues. You will also have the pleasure of knowing that you have helped Second Chance Dog Rescue continue to take care of many of the abandoned dogs here in La Manzanilla. Tickets are 250 pesos and are available at the Helping Hands Bookstore, and Otra Vez on Saturdays and Sundays from 10 a.m.-1 p.m. and also from Scottie Turner. The ticket price includes raffle tickets for some cool door prizes. This is going to be a sell-out, so don’t wait too long to get your tickets!