Friday, February 24 is Flag Day in Mexico and ceremonies will be held in villages, towns and cities throughout the country.  Here are some interesting facts about the tricolor, as Mexico three-colored flag is often referred to.

1. The concept of fixing a special date to honor the flag arose in early 1930s at the suggestion of a Mexican army officer, but the idea didn’t catch on right away. It was Mexico City bank employee Ricardo Benito Ramirez Spindola who inadvertently set the wheels in motion on February 24, 1935,  when he set up a flag display on the doorstep of his home, and in the company of some work companions, mounted a color guard to mark the anniversary of the Plan de Iguala, the proclamation that led to Mexico’s independence from Spain.

2. The proper manner in which citizens are to salute the flag during public ceremonies is to stand at attention with their right hands held horizontally, palm down, over the heart. Men are expected to remove their hats. 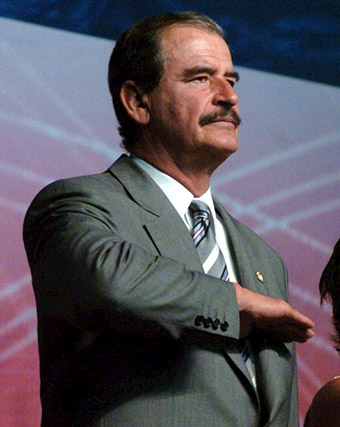 3. It is obligatory for all schools in the country, both public and private, to have a Mexican flag on their campuses to be used for civic acts. The law requires Mexican schools to hold flag ceremonies every Monday morning and on days marking the start and finish of the academic cycle.

4. According to most human rights organizations, the right to set fire to a Mexican flag is guaranteed under the Constitution as an act of free expression. However, some legal experts say flag burning is not specifically mentioned in the Constitution and can be considered an administrative offense under an article that determines “ultraje a las insignias nacionales” (insulting national insignia) to be “una perturbación del orden público” (breach of the peace).

5. Laws dictate that citizens should always handle the Mexican flag with care and due respect. Contrary to common practice in the United States – turning the national banner into any kind of personal apparel is considered a crass sign of disrespect. In 2008, Mexican pop singer Paulina Rubio was fined for posing nude wrapped in the flag in a photo shoot for a Spanish magazine.

6. By law, the Mexican flag must be flown daily at the Congress building in the capital, all the nation’s immigration offices, Port Captain offices, international airports, consular and diplomatic missions abroad, and in the Plaza de la Constitution (Zocalo) in Mexico City. 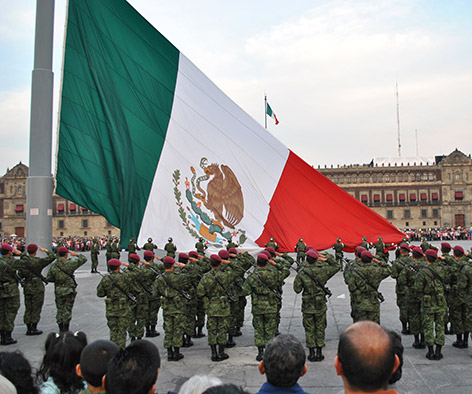 7. The coat of arms on the Mexican flag has been modified at various times in Mexico’s past. Nonetheless, it has included the same features throughout: an eagle, holding a serpent in its talon, is perched on top of a prickly pear cactus; the cactus is situated on a rock that rises above a lake. The coat of arms is derived from an Aztec legend that their gods told them to build a city where they spot an eagle on a nopal eating a serpent, which is now Mexico City.

8. Both Mexican historians and ornithologists have become engaged in a running debate over the true identity of the eagle depicted in the national emblem. Based on common depiction in the modern era, one side label the bird as the golden eagle (Aquila chrysaetos).  The other camp claims it is really the Northern Crested Caracara (Caracara cheriway), a more homely species known as the sacred eagle, and known in the Aztec culture by the name iztaccuauhtli.

9. According to most historians, the famous chiles en nogada dish was created in the colors of the Mexican flag to entertain Agustín de Iturbide when he passed through the city of Puebla after signing the act sealing the consummation of Mexican independence from Spain in 1821. The story goes that Augustinian nuns came up with the plate to celebrate their “saint’s day” – August 28 – by creating a dish that featured chiles (green), pomegranate (red) and walnut-based cream sauce (white).  There are a few alternative versions, but this one remains the most popular in Mexican text books.