“I doubt if anybody would call me boring,” quips Kelly Hayes-Raitt, after making a presentation to some 50 people at a meeting of Democrats Abroad in Ajijic. 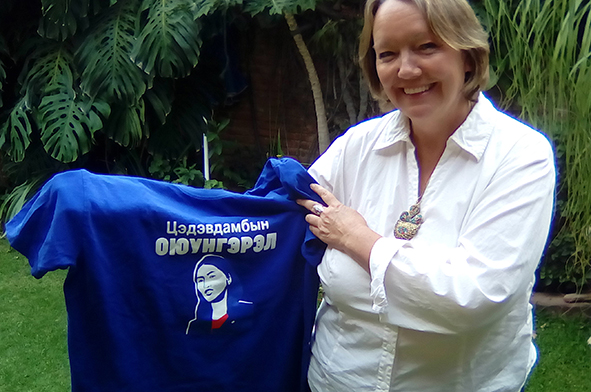 She has been asked if a thirst for adventure motivates her sojourns to countries such as Mongolia, China and Vietnam, just described in a speech whose only visual aids were a hand-drawn map of Asia and a bright blue t-shirt publicizing the election campaign of a female, Mongolian member of parliament.

But, although adventure is clearly a product of Hayes-Raitt’s lifestyle, one soon discovers that her underlying motivation is something quite different. It isn’t even, primarily, the opportunity to live for free as she house and pet sits in exotic locales (including for several months in Ajijic for the past seven years), a subject that is the focus of her upcoming book, “How to Become a House Sitter – Insider Tips from the House Sit Diva.”

She reveals her true motivation in comments, at first puzzling, that came at the end of our interview, after I thought we had already covered all the important points.

“I’d like to mention about going to Baghdad in 2003, five months before the U.S. invasion, and then going back three months later to find the people who had touched me so deeply. And going in 2006 to the Middle East to work with refugees in Damascus, Beirut and the West Bank of Jordan.”

Clearly this was not your average adventure seeker and Hayes-Raitt soon clarified what is at the heart of her itinerant lifestyle. She is writing another book, she said, parts of which have already appeared in anthologies and received literary awards. Its title, “Living Large in Limbo—How I Found Myself Among the World’s Forgotten,” describes her experiences working with refugees.

“My burning desire to write this book is what propelled me into full-time house sitting. I’m doing it to have the financial freedom to write about refugees.”

And she gets most of her writing done during her seven months every year in Ajijic.

While aspects of Hayes-Raitt’s unusual lifestyle may sound attractive to many, her unusual background goes a long way toward explaining how her life took on a form that probably, in the final analysis, would suit only a few people.

“I’ve been a political activist all my life. My mother was an activist and she pushed me around in a baby carriage as she was working on campaigns. I worked on Shirley Chisholm’s campaign in New York when I was 12 years old and I graduated from high school knowing I wanted to be a professional campaign manager.”

For 30 years, she worked as a political consultant in California, concentrating on environmental issues along with women’s rights and civil justice. One of her most memorable campaigns was an unsuccessful one to defeat a ballot proposal to kill bilingual education in California. (The measure was finally overturned in 2016.) She also ran unsuccessfully for the State Assembly in Santa Monica in 2006.

Now she focuses mostly on writing and publishing her two books, as well as on a column about social justice in a community newspaper in west Los Angeles. Although she has plans to house-sit in Senegal and Malawi this summer, house-sitting does not always take her to places whose names cause the eyes of most North Americans to glaze over. She recently house sat in London, where she started a romance with a local man, and she has also taken care of homes, apartments and/or pets in such desirable locations as Berlin and Amsterdam.

Asked if house-sitting is difficult to set up and do, Hayes-Raitt quips pleasantly, “Read my book and find out!” The title will be available in late May via becomeahousesitter.com and later on Amazon. Background and updates on her upcoming book on her experiences with refugees are at an in-depth site, livinglargeinlimbo.com.

Hayes-Raitt plans to be at her local house-sit in Chula Vista, near Lake Chapala, where she is “a slave to Cha-cha, a rambunctious, rescued pit-lab,” until May.