This is a complaint of verbal abuse and threats of physical harm by a U.S. citizen residing in Chapala. 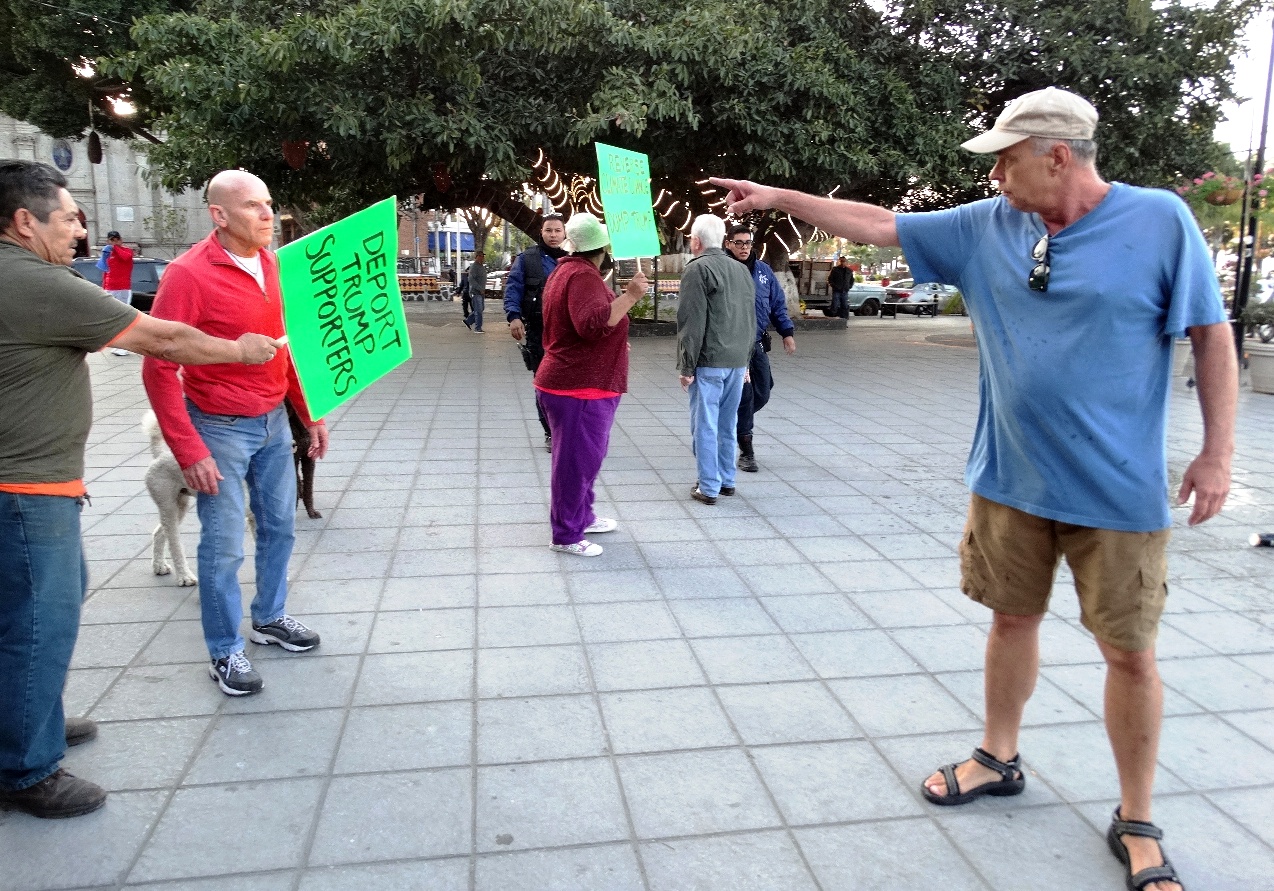 Since the November 2017 election, this individual has demonstrated erratic and, at times, violent behavior. The latest act of revenge against those he opposes was chronicled recently on the front page of the Guadalajara Reporter.

The man in question is the gentleman in the red shirt, with the bald head.  I have been present when he has threatened bodily harm to others. His general practice is to try and intimidate those who he deems not in agreement with his political beliefs, using verbal insults.

This latest incident shows that the level of his aggressiveness is increasing, and in my opinion will lead to a much more serious incident.

None of this reflects well on the United States or its citizens who choose to reside here in Mexico.

There is a fairly large group of Americans who support and can confirm what I am about to tell you.  Most of us are retired, in our 70s, and want to live in this beautiful and peaceful town without having to be afraid of a crazy bully.  We need something to be done about it.

The reason is that an American is going to get hurt or killed here in Chapala. We are a diverse group of Americans: Republicans, Independents and Democrats.  Most of us are friends and get along well.  However, there is one American living across from the Red Cross who has become extremely crazy and dangerous, and even more so since the 2016 U.S. elections. There are several people, including a 77-year-old woman, who are totally terrified of this idiot. Although recent problems seem to be political, he has been in arguments with many other Americans and Mexicans over various other issues.

The day after the election, this man openly attacked an Australian in the Chapala plaza.  He charged at me a few days later on the Chapala malecon, until a group of friends intervened and calmed things down.  Over time, he has become worse. He has spit three times at an 80-year-old man, and he also assaulted the same man with his bike.

Over this past weekend, he made up protest signs, saying things like, “If you support Trump, get out of Mexico.” His car has the same sign.  Although everyone has the right to protest, they don’t have the right to harass and threaten others.  In these protests, he was using innocent and poor Mexicans to confront Americans.

Other than talking to the local police, I wonder if the U.S. Consulate has any suggestions on how to handle Americans harassing and threatening other Americans in a foreign country?  If nothing is done here, someone will surely get badly hurt or killed. We need a solution before this happens.

I have often asked myself why, if you voted for the current U.S. president, you should not be taken to task for living off and taking advantage of this country that has welcomed you with open arms?

I want to state clearly that the actions of the individual paying his employees to disseminate his political message is completely wrong.  I believe it was a stunt and showed cowardice on his part. However, this is a very isolated incident and as much as we may disagree with almost every position of this (U.S.) administration, there is a method we will use to save our country.

We will vote and we will continue to carry out peaceful protests.

We are not the white supremacists or nationalists. We are the party of hope. We bring a message to the world of peace and partnership. And we especially support our adopted country with volunteerism and economic support of local business.

If you are like many conservatives and support fiscal responsibility, small government and, unfortunately, the denial of women’s rights, then vote for that. Don’t vote for or support a failed, bankrupt reality TV star.

Whatever has happened to the Ballet de Jalisco? After having performed to sold-out houses for the past two years, there are no performances scheduled this season!

What’s the point of being a professional dancer if you don’t perform? This talented company of 30 dancers continued to work six days a week from January 7 until mid-February before they saw a pay check.  Out of loyalty to their director and one another, they have stuck to their rigorous practice schedule.  But not knowing if, or when, they will ever get to perform again has left the entire group nervous and depressed. Some of the company’s top dancers are beginning to look to Mexico City and abroad for positions where they will be appreciated for what they do best – perform!

I have watched Guadalajara go from a city without a ballet tradition to one with enthusiastic fans who fill the theater for every performance.  I have watched the company (missing only two productions when I was out of town) from its very first performance. I have seen the dancers, as individuals and a group, evolve into a highly professional, talented and cohesive company, able to make a mark on the world stage.

Is all that work for nothing? Has the director simply prepared the dancers to reach their professional aspirations on other stages in other cities and countries?

I truly hope not. That would be a terrible loss for Guadalajara!