Chinese food in the Americas was basically improvised by Chinese immigrants in the late 19th Century. Recipes prepared by immigrants were based on available ingredients and the Westernized tastes of Americans.

The earliest wave of Chinese food such as chop suey, egg foo young and lo mein were actually inventions from Cantonese, Szechuan and Mandarin recipes for Americans. 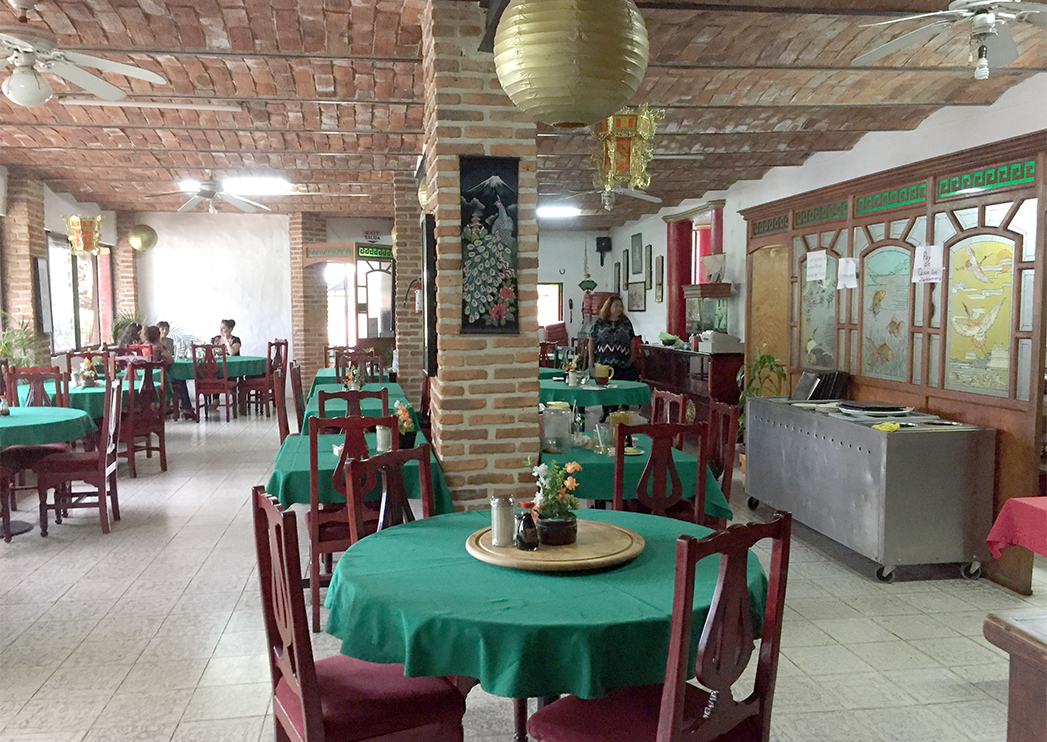 Ajijic’s Min Wah’s menu, like most North American Chinese menus, contains most of that same immigrant hybrid fare, including some dishes with a Mexican accent. But the menu also has original Chinese dishes as well: Peking duck, lemon chicken, Mongolian chicken, etcetera. There’s also a large assortment of favorite appetizers, including crab puffs and combination plates, as well as 12 soup offerings (something Campbell’s couldn’t even match). Another whole menu lists the Chef’s Specialties: orange beef, sesame chicken, soy bean noodles with pork and much more.

My companion ordered the Mongolian beef. And they didn’t fake it. I was told it was just as it should be: a keenly whisked marinade of soy sauce, broth, red pepper, ginger, brown sugar, hoisin sauce dressed a seared and shredded flank steak with sauteed onions and a side bowl of rice.

I have two favorite Chinese chicken dishes (more accurately, American-Chinese), chicken with cashews and vegetables and orange chicken, both of which are excellent at Min Wah. I opted for the chicken with cashews and asked for extra vegetables. The keys to this dish are the fresh vegetables and cashews cooked in sesame oil until firmly yet gently soft. I ordered noodles instead of rice, but received fried noodles, not the expected boiled rice or wheat noodles. Anyway, the oval plate came with chunks of spiced chicken crowded with the cashews and vegetables and prepared to just the right tenderness.

A version of the same dish with almonds and no chicken was also prepared with the same presentation and freshness for my third companion.

Chinese food can become too common and unadventurous, but Min Wah’s menu is broad enough to give diners the experience of much greater choice. That said, while the restaurant features fish swimming in a small pond at the entrance and in a glass tank inside, there were oddly no fish dishes on the menu. But they did offer eight variations of shrimp recipes. I do hope they will add one or two fish entrees, since fish is becoming the healthy meat of choice for many and because Chinese cooking can do marvelous things with fish and other seafood. No MSG is used in any of the dishes, even if requested.

The setting is faux-Chinese, but tidy and spacious with comfortable seating. There is also a separate bar at Min Wah with a vast selection of beers, wines and spirits. There is plenty of parking at the tri-corner up the mountain at Al Tepalo 96.

And anyone in Ajijic who has not tried this extensive Chinese menu may be missing a chance for something exotic and even what is considered authentic Chinese. They also have a condensed luncheon menu, but with several exotic specialties each day. The service is notably spot-on and the reasonable prices could be based on the de-valued Chinese yuan.