As Guadalajara and Jalisco enter into their warm season, typically between April and June of each year, residents and seasonal visitors should take precautions to avoid heat stress.  What’s more, the University of Guadalajara’s Institute of Astronomy and Meteorology reports that even in the current period, temperatures are hitting markedly high levels (33° C or 91.5°F in the month of February).

Mexico´s largest governmental health care agency, the Instituto Mexicano del Seguro Social (IMSS), warns of the danger of fainting spells during the warm season.  According to Hector Morales Villaroel, head of emergency health care services at IMSS Jalisco, fainting spells should not be taken lightly.  Fainting spells are typically provoked by prolonged exposures to high temperatures. Morales notes that women (particularly pregnant women) and senior citizens are more likely to be affected.  While a fainting episode by itself is not technically a disease, it may be an indication of other underlying, serious medical problems such as heart failure, diabetes, neuropathy, and particularly with seniors, degenerative disease.  He advises anyone having a fainting episode to immediately visit the nearest emergency room for care and diagnosis. 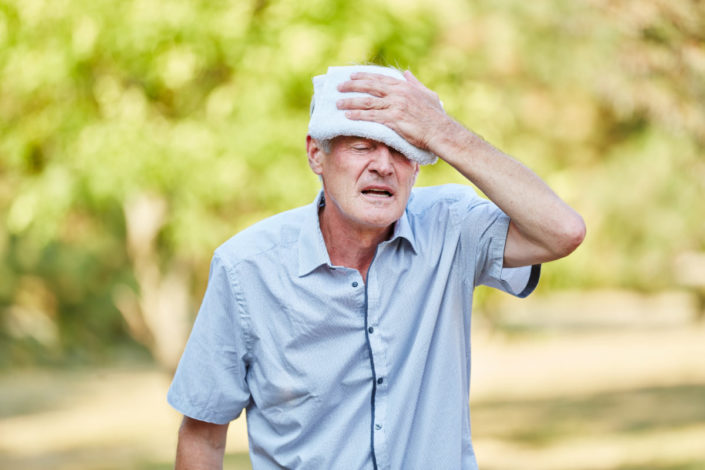 Medical pathologist Dr. Olga González Rascón agrees that prolonged exposure to heat can lead to health problems, particularly dehydration, especially where direct sun exposure is involved. González reminds us that prolonged and frequent exposure to the sun may not only result in heat stress, but also may lead to serious skin cancers (basal cell, squamous cell and melanoma).  She adds that in addition to seniors, people at younger ages may be affected, such as children.  She advises everyone to drink liquids and those at risk to avoid being outdoors between the peak heat hours of noon and 2 p.m.

Turning to seniors, special care should be taken.  Dr. Rosa Maria Urzua Esteva is a physician who focuses her practice on geriatric patients.  A life-long resident of Jalisco, she is aware of the particular risks associated with heat stress for people living in the Guadalajara area.

“We see a lot of problems here with seniors during the warm season,” she says, noting that special care should be taken starting no later than March of each year and extending into July when the rainy season returns to Guadalajara and cools temperatures a bit.   Just this week, Urzua reports seeing three patients for heat stress, all exhibiting the classic symptom of cognitive dysfunction, typically caused by low or high blood sodium levels.  Two of the patients had mild urinary infections, a trigger event for heat stress, along with mid-day walks and car trips. Urzua observes that seniors sweat less, do not drink as much, and because of this, retain residual urine in their bladders leading to urinary tract infections, often few little or no prior symptoms.

Family members, who often become alarmed because of the senior’s unexpected disorientation, need to be keenly aware of the risks involved in order to safeguard their relative.

“Hydration is number one,” says Urzua.  She prefers water for this purpose with limited administration of electrolytes.  The amount a patient drinks should be measured and the urine should be checked for volume and concentration.  If volume remains low or urine concentration does not disappear, fluids should be administered continually, even if in smaller, more tolerable amounts.   Seniors should also bathe regularly, Urzua advises, so that sweat glands open, skin temperature decreases and seniors will be inclined to drink more fluids.

“Don’t disregard fluid intake because it can cause dehydration that can lead to a thrombosis (blood clotting inside the vessels),” she says.

Given that many seniors take medication, this creates an added risk of suffering heat stress.  Medications that increase the risk of experiencing heat stress include: antidepressants and antihistamines that reduce sweating and therefore increase the risk of overheating, beta blockers taken by heart patients that limit the capabilities of the heart and lungs to adapt to heat stress, amphetamines and stimulants that raise body temperature, diuretics that promote fluid loss, and opioids and sedatives that effect a person´s ability to recognize symptoms and body changes before it is too late.

The signs of an imminent fainting spell are many and varied, but generally include: headache, dizziness, profuse sweating, nausea and vomiting, muscle weakness or cramps, hot, dry or pale skin, shallow breathing and behavioral changes, such as disorientation and confusion.

Apart from the precautions mentioned above, there are many things you can do to avoid being affected by the heat.  These include:

• Stay in air-conditioned or well-ventilated areas

• Do not overdress; dress lightly

• Know the warning signs and risk factors discussed above

Always keep in mind, every person is different and no two people will be affected in the same way when it comes to heat stress.  So, when experiencing such symptoms or even when in doubt, seek medical help sooner, rather than later.  It could save your life or that of someone you love.

Dennis Morris is a graduate of the Universidad Autonoma de Guadalajara (UAG) School of Medicine.