Although meat is a mainstay of Mexican cuisine and vegetarians are generally not at home here, the discriminating seeker of good quality, grass-fed or organic beef, pork and lamb — especially city dwellers — may come up almost empty.

“The topic is important because with organic agriculture you can get about the same yield per acre as with conventional agriculture, but raising beef is harder. A cow raised naturally in a pasture needs more space than a cow that is confined to a stable and fed grains and additives. So raising organic beef doesn’t appear to be as efficient.”

Organic meat is likewise an important but perplexing concept to ranchers raising free-range livestock in family operations that have used the same techniques for generations.

“North of the border in the 1960s, everyone used to raise organic meat, but we didn’t know it was organic,” joked a semi-retired rancher who raises grass-fed cows and sheep east of Guadalajara. “Hormones arrived in the 70s. Now the U.S. FDA approves five of them, but they’re no good. Meat today looks and tastes different. Beef used to be rich and red and beautiful — not gray red, not burgundy.”

But organic certification is not a panacea, the rancher pointed out, because it is very expensive — out of range for many Mexican ranchers except the biggest.

“And the requirements are unbelievably stiff. You must have sterilized soil. I doubt anyone could truly meet them.” Still, despite the difficulty of finding meat raised without hormones and antibiotics, the demand is great among foreigners residing here, the rancher said, noting that their scaled-down operation must turn away customers and is only able to supply its owners and a few friends.

Maria Elena de la Torre, one of a few Chapala-area sellers of grass-fed meat, likewise notes that her ranching relatives seem to view certified organic meat as a perplexing concept. 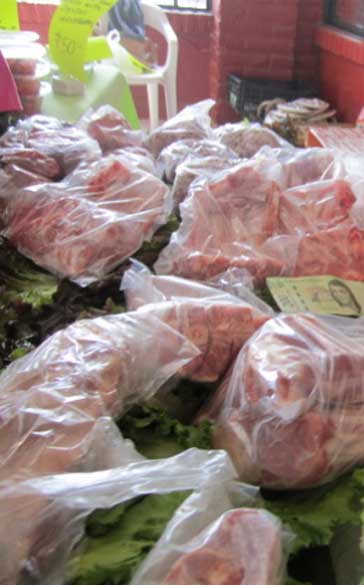 At the weekly Lake Chapala Farmers Market (Tuesdays 10 a.m. to 12:30 p.m.), she enthusiastically sells beef raised by her relatives on a ranch where practices have been the same for generations. However, as she doesn’t hesitate to point out, “my uncles never tried to get certified. They’re not interested. But their animals are grass-fed and don’t get any hormones, antibiotics or clembuterol,” a cheap, anabolic steroid that is dangerous to humans and illegal in Mexico except as an asthma medicine, but is reportedly in wide use here as a means to bulk up beef during the few months before slaughter.

Revealing what is perhaps a little known secret, De la Torre points out that around her uncles’ ranch near the village of Potrerillos, “there are lots of people raising livestock the way we do.” All these ranchers sell their meat daily in the Jocotepec market, she said. “My uncles’ carnicería (butcher shop) is called Los Betos. Another one is called Los Mariscal. In fact, a lot of restaurant owners from Guadalajara go there to buy meat.”

Likewise, at the many markets in Guadalajara — Abastos, Alcalde, San Juan de Dios and Atemajac, which specializes in meat and contains about 15 carnicerías, as well as in small individual butcher shops scattered around the city – one finds promising hunting grounds for meat of better quality than that which the huge rastros (slaughterhouses) and centros de acopio (storage facilities) bring to supermarkets. Still, a caveat emptor philosophy and some Spanish is necessary.

One such butcher, Carnicería La Calma (33-3632-5244), on the south side of Guadalajara, has its own, small, livestock-fattening operation in a nearby town, where it buys “skinny calves,” according to a spokesman, and fattens them for three months with pasturage, alfalfa, oats and molasses but “no hormones, clembuterol or antibiotics, unless they are sick.”

Market forces are reportedly the reason that clembuterol and other dangerous substances are used, especially in big livestock operations that supply giant Mexican meat outlets.

An agriculture and livestock official from Aguascalientes was quoted in La Jornada saying that ranchers who don’t use clembuterol to bulk up their cows “are plain and simple out of the market, because if they don’t do it, they aren’t able to sell their product.” Similarly, an official from Veracruz, one of Mexico’s biggest livestock-producing states, “calculated that more than 50 percent of the meat consumed in Veracruz has clembuterol.”

Besides being relatively inexpensive, clembuterol is utilized because it rapidly increases an animal’s muscle mass — the same reason athletes may use it — instead of adding fat or marbling to meat, which health-conscious consumers believe they must avoid.

Athletes, in fact, comprise another group, in addition to foreigners and people suffering from cancer, who seek organic or grass-fed meat and avoid grain-and-additive-fed meat.

“Sporting clubs are sometimes our customers for certified, organic meat from the United States,” said Luis Gonzalez, of the premium-meat importing firm Comnor (tel. 33-3650-3900), which claims over 500 clients in the Guadalajara area, including the Superlake market in Chapala. “Athletes need the healthiest meat,” he explained.

Another reason athletes need this clean meat is that clembuterol has been detected during anti-doping tests in the blood of some Mexican soccer players, who said they had not used it for body-building but accidentally ingested it for dinner. So now players have more reason than ever for avoiding it and their teams are willing to pay a premium for certified meat. (Gonzalez notes that his certified organic, imported meat costs 295 pesos per kilo, must be ordered in boxes of 25 to 35 kilos and paid in advance, and can be delivered to Guadalajara or Chapala.)

Argentine and Sonoran meat has a good reputation in Mexico, yet Gonzalez says that, although there are a lot of Argentine people and restaurants in Guadalajara, “there isn’t any meat from Argentina. It’s too expensive to transport. They say U.S. meat is better.”

With meat from Sonora, the northern state that borders Arizona, the situation is even more complex.

“The best quality meat in Mexico is from Sonora,” said Carlos Martinez, a Guadalajara veterinarian who worked for a government agency in Durango connected to SAGARPA, Mexico’s principal food regulator. “And in Mexico, most livestock raising is done traditionally, in pastures.”

“Restaurants open here in Guadalajara saying ‘Our meat is from Sonora,’” said Gonzalez of Comnor, “but they buy their meat from the United States.”

Even stranger, the “U.S. Beef” may actually be from Sonora, says Gonzalez. “All the good meat from Sonora is for export to the United States. They send the carcass there, where it is packaged and sent back to Mexico as ‘U.S. Beef,’ and with a higher price.”

Alternately, “a large number of calves produced here in Mexico go to the United States when they are 6 months old and weigh 380 kilos.” They are purchased very cheaply, Martinez said.

“In the United States, they fatten them using intensive processes in small corrals. We send whole animals north and we get processed cuts back. The Mexican sellers profit very little,” he lamented.

“Nobody really cares about health,” he added. “All the care about is the weight of the animal and the money.”