Can a “review” of a restaurant that is a “reviewer’s” favorite hangout and right across the street from home make any pretense of being objective? Obviously not, but neither, in said reviewer’s totally unbiased opinion, should such circumstances exclude Saint Malo from these pages. 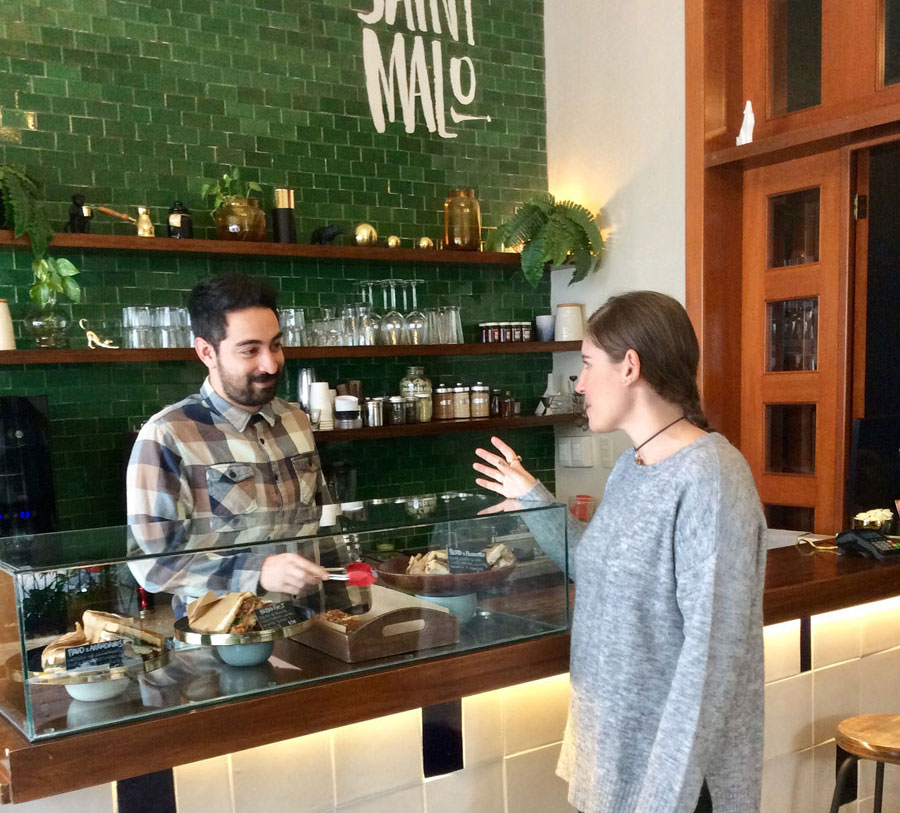 The first clue that something good was incubating was about two years ago, when a handful of carpenters and gardeners began bustling around behind elephant ear philodendrons in the front garden of a small and beautifully designed but vacant house under a jacaranda tree. This was followed by a sign with the enigmatic logo, “Saint Malo,” auguring a happy development to neighbors who thought the quiet street was a little too quiet yet were unenthusiastic about two new, nearby towers that impinged on the street’s homey ambiance.

Other characteristics of Saint Malo proved to be as enigmatic as its name, which comes from the Brittany coastal town, Saint-Malo, and seems a conglomeration of French and Spanish meaning “bad saint.” For example, the inspiration for the restaurant’s menu, with its breakfast Tartines, Pan Frances de Brioche (85 pesos) and Croque Madame (105 and 120 pesos), seems to be clearly French. But you don’t have to look far to notice other influences: an Israeli Shashuka (poached eggs in spicy salsa for 95 pesos), dips such as Tzatziki (Greek), Hummus (Arabic), Pesto (Italian) and Jocoque (Mexican) and hard-to-pin-down treats such as Brie and Mermelada de Tocino (bacon marmalade) for 55 pesos.

The restaurant’s young co-founders, a couple who also happen to be architects working out of an office adjoining the restaurant, laughed and threw up their hands trying to explain the apparent confusion.

“We feel a little like ‘swindlers,’” said Fernanda López, “since we don’t have any typical dishes from Saint-Malo – they serve crepes and oysters there.” She explained that, although her partner Jorge Rodriguez had actually visited the French town (while she was studying architecture in Australia and getting inspired by eclectic neighborhood coffee shops there), the two of them chose the name during a brainstorming session that included other city names.

“The name was very randomly selected … we liked ‘Saint Malo’ because for those who speak Spanish and don’t know the town, it is very ambiguous and catchy, since ‘saint’ means good and ‘malo’ means bad.” (The Encyclopedia Brittanica, however, explains that the town got its name from a Welsh monk, Maclou or “Malo,” who fled there in the sixth century.)

Aside from the catchy name and eclectic food, the quality of the food – and the coffee – are outstanding. Many of the people I have enticed to come to Saint Malo, so convenient for me, have remarked on the taste and presentation of the offerings. My coffee-hound sister declared Saint Malo’s was the best she had in Guadalajara, including her adored Starbucks.

Probably the reason for the outstanding flavors is that almost everything on the menu is made at the restaurant, from scratch.

“The only thing we don’t make in our kitchen is the bread for the tartines and sandwiches,” said López. “We have a great bakery chef that bakes the loaves especially for us. The Strudel with cream cheese and nuts is made by Jorge’s mom, and the spicy oil [condiment] and the blue cheese ice cream we serve with the apple tart.”

If a “reviewer” must find some flaw, perhaps it is that there is nothing on Saint Malo’s menu you could describe as heavy – no steaks or other other big-hunk standards. The largest portion of protein I’ve had there was the seared tuna, for 50 pesos extra – an option on the Ensalada Nicoise (80 pesos). And that portion was generous. Also, in cold weather – and most of Saint Malo’s 10 tables are outdoors under umbrellas – I sometimes wish for hot soup, even though alongside the menu’s tartines, sandwiches and salads, are warm dishes, such as some dips and the delicious Pizzeta Mediterranea, served on pita with great kalamata olives and basil (80 pesos).

Perhaps the best quality of Saint Malo is its hard-to-define good vibe. Maybe it happens because of the wait staff.

“It’s amazing how the energy of our place only brings lovely people to us,” says López. “Even when the staff members decide to keep growing somewhere else, they remain close friends.

“And all this energy even applies to our pets, [a large black dog named Malo and a cat named Simone], which both arrived randomly to Saint Malo and stayed to become our children.”