At first glance, the new-ish restaurant Peku (just off Avenida Chapultepec in Guadalajara and also, as of February, behind the upscale Plaza Andares) would seem to owe its concept to fast food, a la Chicken McNuggets.

After all, its signature “chicken sandwich,” dubbed the Peku Burger, is a towering creation of two breaded chicken filets ensconced in a bun along with a dill pickle and a fried egg.

But just watch a waiter sail by with an elegant salad, or wait a few minutes while a cup of organic cafe americano is individually brewed for you, and the concept of Peku as fast food is all but in tatters.

In fact, according to one of its 20-something co-owners, Marcelo Gonzalez, a native of Los Angeles who speaks good Spanish with an American accent, Peku’s raison d’etre was indeed to be the first “chicken sandwich chain in Mexico.” But few people in Guadalajara got it, he said, and so the concept “has been evolving into what we call ‘California chicken’ or ‘hot chicken from LA’”—phrases that, while they may not be that well understood either, at least do not conjure up a white-bread sandwich of cold, thin-sliced chicken breast. 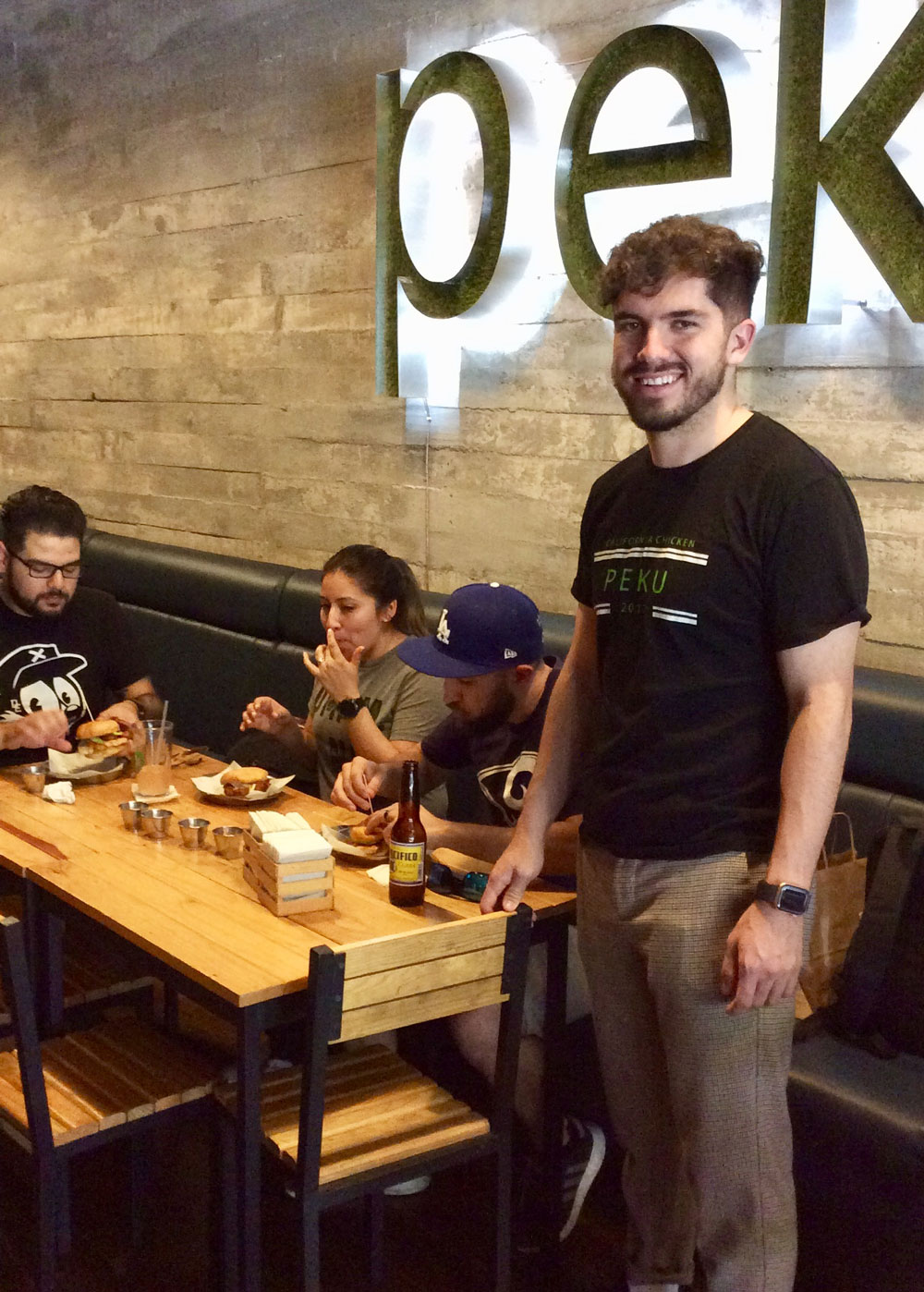 Gonzalez and Peku’s two other founders, his cousins Alex and Gerardo, are all well educated angelenos with degrees from top California universities in economics, psychology or biology. As Gonzalez explained it, the cousins were at loose ends after graduation, had visited relatives in Los Altos de Jalisco, and gradually developed the idea of a restaurant to introduce the then-unknown chicken burger to Guadalajara.

“Our moms were cautioning us, partly because they thought Mexico was dangerous, and none of us had any restaurant experience,” he explained with a smile, although he and one of the cousins had at least studied business and accounting (professions they found boring during college internships). To make up for their culinary deficit, they hired students from Guadalajara’s many gastronomic institutes and Peku now boasts 13 local employees, between the mothership on bustling Chapultepec and the new branch near Plaza Andares. (Incidentally, after two years here, Gonzalez does not think Guadalajara is more dangerous than Los Angeles, despite Peku’s location in what some call a crime-ridden area.)

However, even though the cousins aren’t trained chefs, that doesn’t mean they don’t have well defined ideas about Peku’s menu.

“Our chicken is certified for its safety and we filet it right here every day, marinate it 24 hours and serve it the next day,” Gonzalez said. “We make all our own salsas—the Peku, Bufalo, Ranch, BBQ and so on—and have potato bread buns made fresh every day. Everything as gourmet as possible”—as only three, very young, very enthusiastic entrepreneurs could do it.

The cousins labor daily, serving up their menu of nine main dishes (including “Tenders,” “Nuggets” and a Portobello Burger), an unusual french fry selection (all of potatoes cut daily and imaginatively seasoned) and a couple of desserts including an Oreo malt (Malteado). In addition, Peku offers a drink selection that includes a modest variety of beer and wine, California Lemonade (made with strawberries and white wine) and limonada made from, naturally, California lemons cut daily. 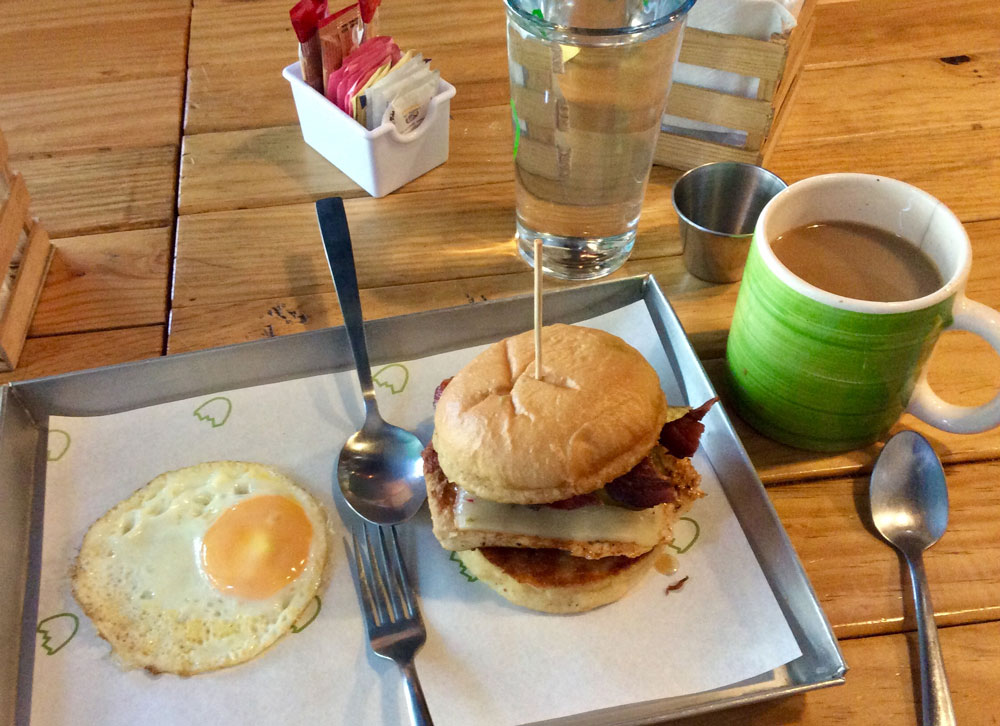 I arrived around noon, hoping for a late breakfast as the web page said, but discovered that, although breakfast had evolved into no breakfast, I could still get a wonderful cup of coffee and something akin to breakfast—a California Burger (99 pesos), which isn’t really a burger at all, but a tender piece of chicken, marinated and grilled (not breaded), including a dill pickle, pepperjack cheese and bacon in a potato bread bun. I asked for a fried egg and coleslaw on the side. (The bun meant the meal was not much in the way of ketogenic or gluten-free, but it was all very tasty.)

Although the daily crush doesn’t arrive at Peku until 5 p.m., there was a respectable group of early diners, particularly men—both pony-tailed/tattooed and of a more standard demeanor, many speaking English. Gonzalez was full of demographical tidbits about his clientele—a sizable foreign population is now working in Guadalajara, he said, mostly online and in “co-working centers” offering good amenities and reasonable rents, and abounding in upscale parts of Guadalajara, particularly the Lopez Cotilla-Chapultepec corridor, in which a Google search turned up half a dozen.

Gonzalez explained that Peku’s new location near Plaza Andares is doing well—“some days they have more business than here.” So the cousins are as optimistic as ever, but remember the importance of touches of appreciation to customers. “Thanks for coming in,” they write on your bill. “Hope to see you here again,” they call out to departing clients.