Last Tuesday, U.S. president Donald Trump paid a visit to a bare patch of desert outside of San Diego to inspect border wall prototypes, looking over them in the baking heat not unlike, perhaps, the way a demanding fashion designer peruses a series of fabric swatches.

The visit comes at a moment of renewed tension between Mexico and United States, with Trump continuing to insist publicly that his neighbors to the south foot the bill for his massively expensive pet project.

Harnessing a sector of the public’s fear of illegal immigration was one of the key ways the mogul was able to garner the support necessary for election to the world’s most powerful office. Fulfilling the promise of the wall’s construction would go a long way toward shoring up his voter base for reelection in 2020.

The president expressed a preference for a transparent wall prototype, the logic being that it was important to be able to see what was happening on the other side.  His reasoning would seem to suggest an unawareness of the existence of drones, cameras, and other modern, ubiquitous surveillance technologies.

Conspicuously absent during the event were politicians from the state of California.  Trump may have rode solo as a way to thumb his nose at a state which has been a continual thorn in his side since his election. Just as likely is the fact that, even for California’s Republican politicians, Trump is politically leprous in the western state. 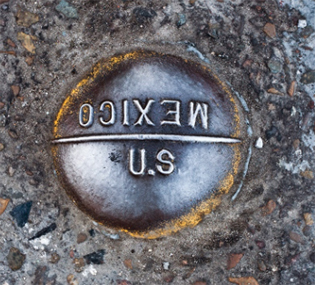 One of California’s leaders not in attendance was State Attorney General Xavier Becerra.  At a Los Angeles press conference Tuesday, Becerra ruthlessly mocked the president’s border protection plan.  “Some people think that medieval walls might keep us safe in this country,” said Becerra, adding that it might only “keep us safe from knights on horses.”

Becerra’s animus towards Trump is no doubt magnified by the White House’s threat last year to de-fund local law enforcement agencies in so-called sanctuary cities, i.e. ones that put limits on cooperation with federal immigration agents.  Like many of the Trump Administration’s more aggressive  anti-immigration measures, the move to punish California for not towing the White House line was stymied by the courts. On November 20, a federal judge blocked the executive order, stating that Trump, in the words of an article in the L.A. Times, had no power to “set new conditions on spending approved by Congress.”

Exactly who will pay for the border wall isn’t the only matter of some confusion and controversy. Similarly contentious is how much the wall will cost.  Trump’s own various, erratic calculations put the number at anywhere between 8 and 12 billion, while Senate Democrats say it will cost a whopping 70 billion.  A number of less partisan analysts estimate a price tag of anywhere between 15 and 40 billion dollars.

For Mexican diplomat and writer Enrique Berruga Filloy, who spoke to the press following Trump’s bit of political theater, the wall prototype inspection was but a flimsy pretext to keep the public’s attention focused on illegal immigration, the  central policy platform keeping his administration afloat.  He also highlighted the importance of countering what he considers the defamatory rhetoric that Trump insists on using towards his country.

“Mexico continues to be a very political piñata,” said Berruga.  “Abusing Mexico is low hanging fruit for Trump and for his base.  But if there is no reaction here it puts our country in an even worse light internationally.”

At a rally Tuesday, Trump, given as ever to making pronouncements to make the Hellenistic god of hyperbole blush, stated that “we have a lousy wall now.  When we put up the real wall, we’re going to stop 99 percent [of illegal crossings], maybe more than that.”